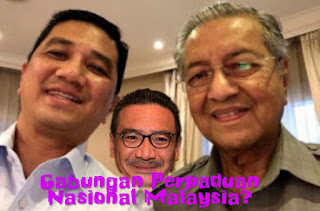 If you have been following Reggy Jessy's Third Force, you would have notice him repeating of Tun Dr Mahathir forming a coalition of 125 Malay-Muslim and Bumiputera MPs without DAP.

Latest is in his international conspiracy theory from an unnamed US source.

Let's cut through the chase and get out with it.

If it is according to plan, the name of the coalition would be Gabungan Perpaduan Nasional Malaysia (GPNM). The core members are MPs from PPBM, PKR and UMNO that have and will quit their respective parties.

That is exactly what two sources told and confirmed. Ini kaw punya sumber, which is as kaw or better than the SB Reggie Jessy claimed could know the color of his underwear.

The acronym has a resemblence to the writers' association GAPENA but ROS will not likely allow the acronym GAPENAM.

Are GPNM or GPS or GBS linked? Mahathir will wish so. Will come to that later. 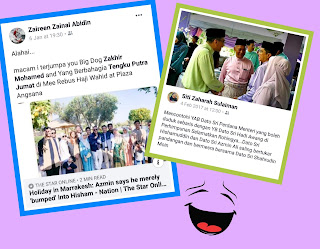 Hishamuddin's boys like the one above tried to dispel the Marakesh meet as a chance meeting.

If you are a confirmed moron, do not assume others are equally moronic. Best not to reveal one's deficiency in intelligence publicly.

One can probably have chance meeting in London, where Malaysians tend to congregate to certain eating spots or tourist attractions.

The odds of chance meeting in cities like New York, or Los Angelas, or Tokyo or Paris is low. It is lower for Casablanca in Morocco, where Rick's Cafe is for the thrill to repeat the Bogart line, "Play it again, Sam" there.

And, please not be too quick to assume from purely visible appearance of politicians or businessmen or corporate players or lawyers or any profession requiring the quality to be cunning.

Remarks like this would only be taken into account by media political analysts as it is a quote but it takes more for them to buy into it. 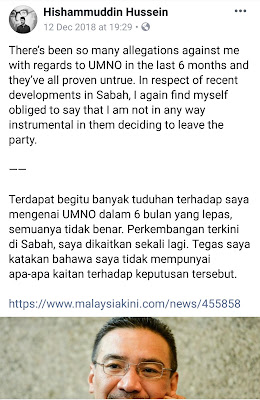 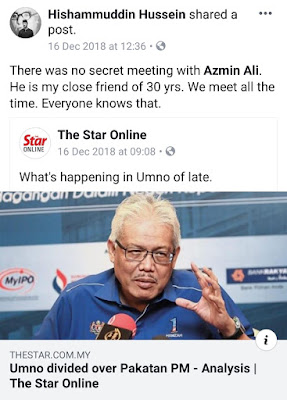 No politicians would immediately bite, especially in view of the Marakesh "chance meeting". Friends for 30 years are likely to plan family holiday together.

Not necessarily in Marakesh, but the kaw punya source said the two friends have been planning things.

The planned leapfrog from UMNO to PPBM hit a snag. They are blocked by DAP-PKR.

And, there is resistance within PPBM too. With Mahathir supporter behind the cheer for Tan Sri Rashid Abd Rahman to menyamun duit kerajaan and topple Syed Saddiq, things are quite delicate.

Mentioned here and here, Tan Sri Muhyiddin is not too happy and could take his MPs to support Anwar.

Azmin managed to beat Rafizi but he could not control the party. His only way is to take his MPs out.

The latest number we heard is more than what is heard. If you need to ask, the answer will be a classic Anwar 916, "Cukup!" 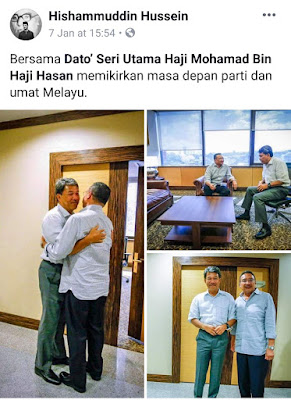 When Hisham brought Hamzah Zainuddin and Ku Nan to meet Daim, it was all set till Ku Nan was charged for a petty RM3 million. It makes more sense for RM300 million or RM3 billion, but not RM3 million.

Talk is Anwar and Guan Eng got MACC to move in and AGC to charge Ku Nan. Hamzah was fuming at Daim and deal was off.

When Hamzah still left UMNO, it is not so much he was afraid Anwar would be trying on his wife again.

There was a plan hatched already.

It makes sense for a former VP to do so. But, it is like giving a wide mouth crocodile the keys to the meat cold room. 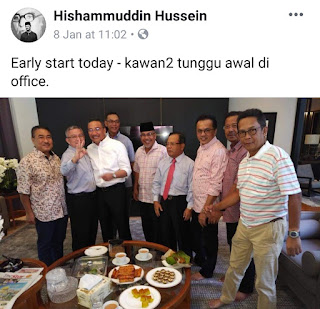 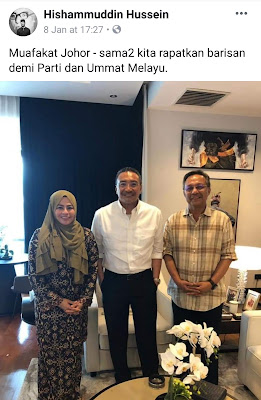 By the next day, Hisham was showing off the people he met on his FB.

Zahid fell for Hisham's support to win Sabah delegates, in which at the same time, his nephew, Hafiz Onn was openly supporting Ku Li.

It was a dead giveaway that Hisham was a snake. 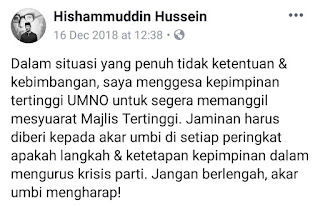 Subsequently, his hands was at work to rid of Zahid.

PPBM not only needs UMNO's MPs, but also its assets and members. By having Hisham as Sec-Gen, he will get all that for PPBM and GPNM.

If Mat Hasan is not sharp enough, he will not realise of a "Dato AA" brought back in by Hisham to do that.

The dude was the one, who helped PPBM with the list of UMNO members for them to work on in the last GE.

He has done the same during Reformasi and will be positioned at UMNO HQ to get his hands on the members list.

The asset is a WIP and it will be the same method used to got hold of chicken hearted Tok Pa. Gertak....and bait.

Though not to return as Minister, his name is one of the three, including Dato Abdul Kadir Jasin up for Felda Chairmanship.

Yes, Megat is leaving. He is not in-sync with the government's "piratisation" program to do a clearance sale of GLCs' asset like what happened to Tabung Haji.

Hisham may have privately convinced Mat Hasan that he would like to help UMNO return to power.

It was not revealed that it be done via the GPNM. Once all the MPs are on board, the train will leave without Mat Hasan.

If made Sec Gen, Hisham could make UMNO lose at Rantau. The power of Sec Gen is such that they could topple the President. Mat Hasan is not politically strong enough to counter Hisham's influence or holds his balls.

He may have been the CEO of a PLC but in UMNO politics, Mat Hasan is still SBU Manager level. 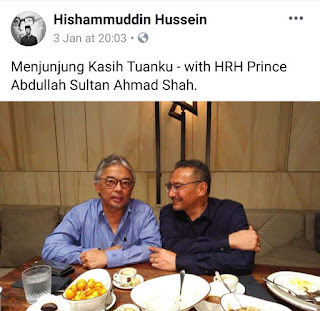 Hisham is now being accused for manouvering to get the Sultan of Pahang to abdicate and put the Crown Prince in the running for Agong.

With Pahang in the fray, it could swing that way. It is unlikely to be Tuanku Nazrin as it is not His Majesty's turn yet.

It is not possible for Hisham to dictate the whole event, but TMJ's short lived Tweeter confirmed Hisham as a snake.

Rearing snake is lucrative business but being one may or may not be.

The only development that could be tied to such allegation is the selection for new Agong.

Hisham do have access to the Pahang royalty through his wife, Tengku Marsilla. She is the daughter to Tengku Abdullah, the younger brother to the present Sultan of Pahang (till a decision formally made today).

It is an open secret that Pahang royal family lent a hand in his VP campaign, in which he won by a narrow margin against Mukhriz for the last VP post behind Zahid and Shafie Apdal.

Talk was another royal family lent a hand in another state but he has since "betrayed" them.

The perception for the late entry of Pahang is to maintain the rotation and could be due to the wide report by media slanting that way.

It is possible that the Pahang royal family may not be happy of, invisible but known, hands trying to be clever (the Malay word is memandai) and manouvre.

It could also be a wayang for Sultan of Perak selection. 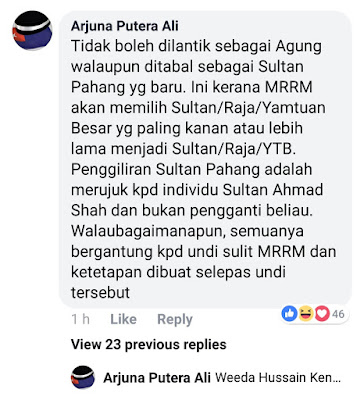 Speculation is rife that Mahathir was worried should Sultan Johor be the next Agong.

It is believed that Hisham came to the rescue to ensure the GPNM plan not disrupted and he be DPM to Azmin.

There is still the possibility that it may not be Pahang and it is Johor come January 25th. Mahathir had preempted it with the visit yesterday. 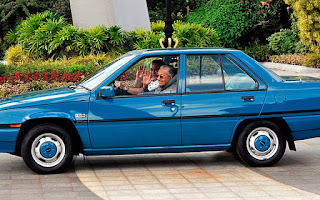 News report described it as cordial and friendly with the Sultan drove Mahathir back to the Senai airport in the first model of Proton.

It can be interpreted many ways and it depends on which way is the political inclination. The Sultan's good maintanance crew would have ensured the power window still works.

Those, who have had engagement with His Majesty knows he is a superb host and can be quite engaging as well as entertaining. It is only expected.

Mahathir did not disclose their discussion but merely told reporters that it was frank and open.

Frank and open is good enough and not exchanges of each other's wishlists. After not having met for a long time, it could be left to only a single wish with a list.

It was reported that there was neither any discussion on the next election for Agong nor the Malaysia-Singapore spat.

Maybe a request to move Hisham from Sembrong to run in Pahang. No wonder Muhyiddin did not plan to run in next door Sembrong but merely look at the possibility of Muar.

He decided not to because Razali was destined to lose. Syed Saddiq is enough. Well ... that was 7 months ago. By March or April, senario could be different.

Anwar had the number for 916 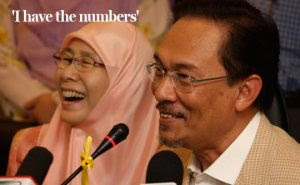 Does that mean GPNM has more than 112 and could take over government with no DAP-appointed Speaker of Parliament could stop a turnover?

The numbers of PPBM MPs could be cut to only 8 seats. PAN has demanded on Wan Azizah to vacate the DPM post for Anwar.

While, Azmin may have gotten substantially more than the earlier mentioned 25 MPs. There is no turning back for Azmin.

Warisan is a bit tricky now that ex-UMNO MPs and ADUNs planned to establish PPBM in Sabah. If they go through, Shafie would be pissed as hell.

But there are few ex-UMNO MPs there to gain.

So, UMNO, Sabah and Sarawak will be where the fight for seats. Mahathir may say, "Cukup!" Anwar have been saying,"Cukup!" since 2008.

Both have to work at it.

DAP could tilt their votes any which way. They could make it game over for any of the two warring Malay faction.

How soon would this plan come to fruition, if it ever will?

More logical and best to ask the players than the blogger.

Whoever elected as the new Agong...we as the citizens need to show our respects to the Agong, regardless from which state he's from...DAULAT TUANKU....

Everybody have the time to wait. But who shall be after the time is up. Tick tock tick tock. He’s frail and sometime gasping. So is about game vying upon each other. Muhyuddin, Azmin, Hishamuddin and last but not least Mukhriz.

Zuraida warns of ‘traitors’ in veiled attack on Anwar

Great stuff.In the end the PH govt could only last 22 months PH is just not good enough.Lets give voters a new mandate in next PRU 15..It is coming very soon once the pandemic slowly easing.We are watching and excited to vote for a new government for the people.Cheers.