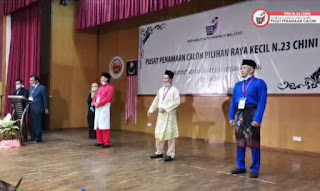 PPBM is now divided between the official pro-Tan Sri Muhyiddin group and faction aligned to Tun Dr Mahathir (identified by recently blackened logo). The fair assumption is both Tengku Hisham and Mazri came from the black PPBM faction.

However, there were no visible black PPBM supporter at the nomination. Tengku Hisham received support from mixed race members of the local Muay Thai club.

It should carry much influence in the rural area, but sources claim he knows he cannot win and seek not to be embarassed with votes less than 50.

His motivation to run is puzzling. Does he has any message to convey by running?

Or is it merely providing the platform for Mahathir to chant his trademark "blame everything on Najib" in Pekan?

If there is no message to be conveyed, public should demand an answer beyond him exercising his democratic right.

To add to the intrigue, Tengku Hisham is close and casual to Pahang's Orang Besar Dato Shahbandar Najib Razak.

A source claim he had sought for Najib to officiate a Muay Thai event but it did not materialise due to the Covid Corona pandemic. 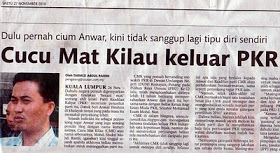 If Tengku Hisham reason to run is a mystery, the other independent candidate, Mohd Shukri bin Mohd Ramli is equally mysterious.

Shukri is known as the blogger Cucu Mat Kilau (CMK) and operator of blog and FB Pahang Online. He ran into trouble with the law back in 2007.

The Reformasi activist resigned from PKR in 2011 and seemed to hanging out with the Chegu Bard group. It does not jive for political pundits to presume him as proxy to PKR Chairman, Fuziah Salleh.

No plan to run 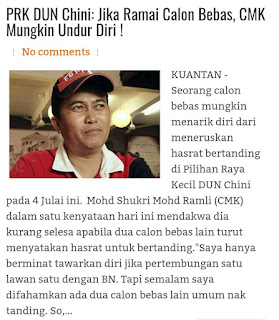 This is CMK's third attempt for public office. Initially, he told online media he cancelled plan to run in anticipation of a crowded poll.

The former UMNO Jengka 7 branch secretary was to run for the state seat Lepar in 2004 but gave way to PAS.

He ran under PR ticket in 2008 for another state seat at Kemayan to lose to BN candidate.

There were talk of him running for Pekan in 2013 but ended running for Semambau state and Indera Mahkota parliament for GE12 as independent to lose both.

Shukri could likely be a case of attention seeking syndrome. Nevertheless, since leaving PKR, he has position himself as a social activist and voice of the people.

Will the constituency of mostly Felda settlers and orang Asli village need their voices heard or problem need solving?

Its a cliche but in the rural constituency, it is usually nore important than only talk. Quite often than not, the promise to be the voice of the people are merely lip service.

Look at what happen to PH's 100 day promise and its long list of manifesto. Hardly serious to deliver.

They could be running because funding is available. Without money, no campaign could get going.