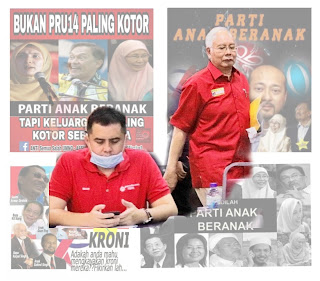 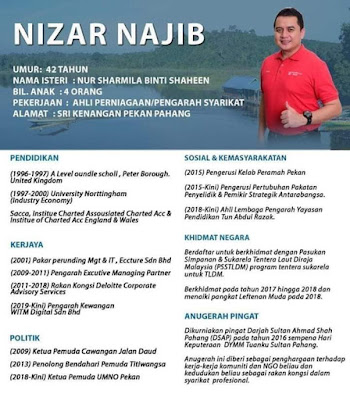 Pro-UMNO bloggers and netizens are giving strong support to Dato Najib's eldest, Dato Nizar Najib to fill up the Chini's vacant state assembly seat. It is obvious to the coverage given to Nizar doing field inspection as office bearer before any election.

If chosen as candidate, Nizar is no parachute. He went through the mill to move up the ranks in the youth wing from branch to division and to his current position as Youth Leader for UMNO Pekan Division.

Nizar followed his father's footstep to study at Nottingham University and took up the same course in Industry Economics. Unlike Dato Najib, who went into politics early following the sudden death of his father, the late Tun Abdul Razak Hussein, Nizar had a corporate career and quite a successful one.

Nizar is a pleasant character and carried himself well. Despite his blue blood pedigree, he is socially adaptable to the UMNO crowd.

More so, his late mother-in-law is the renown Iron Lady and former Wanita Chief of UMNO Jerlun Division and Kedah state UMNO, Dato Maznah Hamid. His mother is related to Tengku Tan Sri Ahmad Rithauddeen Ismail. Nizar has UMNO blood running from both sides of his family.

Nizar has been accepted by the folks in Pekan. Judging by the pictures of his field visit circulating on social media, he is received well by the kampong folks.

In many ways, he is a dream team candidate. If PKR genuinely is neither running in Chini nor bankrolling an independent candidate, Nizar could emulate his father's first election to win without contest. 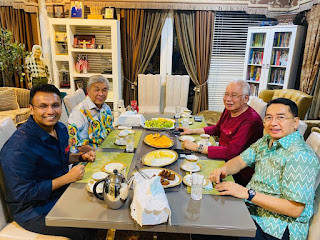 More likely than not, it is a Division Leader paying respect to his party President to discuss Chini by-election preparation. Nizar was present in his capacity as Youth Leader.

Dato Tajuddin Rahman gave a statement of support for Nizar, but hs cadidacy is not likely the topic for conversation.

Najib would not be comfortable to lobby for his son to Zahid. He is aware as to not emulate his old friend, Tamrin. For many years, UMNO have been campaigning and criticising its political opponent as Parti Anak Beranak (family political party).

Zahid is quite aware and not comfortable to select Nizar. However, he could not say so as to ambil hati (take account) of Najib's sentiment.

On the contrary, Najib could not say no and be seen in the way of his eldest political career. He has to ambil hati Nizar's feeling. Those overwhelmed by Nizar would end up blaming the stepmother, Datin Seri Rosmah Mansor.

No DUN seat in Titiwangsa 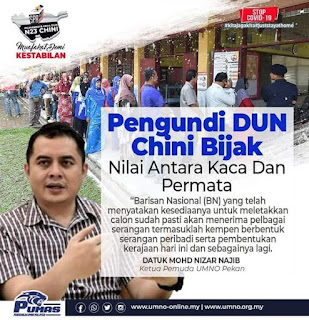 Najib is the Division Chief and Member of Parliament thus it is improper to have his son as candidate and by all probability, elected for the vacant state seat in his father's Parliamentary constituency.

What would the other local aspirants say?

If it had been a state seat in Titiwangsa, Nizar's former division, he could be given due consideration. Unfortunately, Titiwangsa is in Federal Territory thus has no state seat.

If Nizar were to run and got elected, opposition and even opponent within UMNO would use it against Najib to blame him for practising nepotism. Kadir Jasin would be in his element.

All along it was Mahathir that rampantly practiced KKN (Malay acronym for korupsi, kronisma dan nepotisma). Mahathir used to claim Mukhriz was only allowed to join politics after he retired. No one raised Mokhzani was Treasurer of UMNO Youth during Mahathir's premiership.

Even if Nizar was asked to wait out till the time comes to replace his father, he still has to face accusation of dynasty politics. From Grandfather to father and later on to him, Pekan seat will be seen as inherited post for Tun Razak's family. However, it is likely to be acceptable and local do not mind.

The suggestion to have Nizar as candidate may have insidious intention. It could be to instigate local sentiment against Dato Najib for denying locals to be candidate. Subsequently, some unknown hands could be trying to pressure Najib to quit politics and replaced by his son.

One major negative against Nizar is that he is not local but KL-based. He is of urban temperament and not sufficiently familiar with settlers' life. Its the reason state assemblymen should ideally be local based as it is easier to deal with day-to-day affair of the constituency.

There could be locals wanting Nizar as state assemblymen for the intention to fleece him financially. If he is unable to meet their expectation, it will end up as burden to Najib.

This is the realpolitik urbanites like Nizar may not realise of rural constituency and could be taken for a ride.
at 6/11/2020 01:35:00 PM