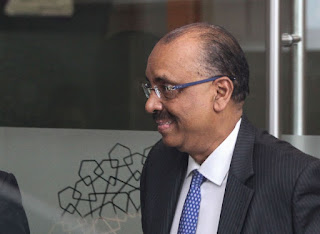 Shafee: But underlying all that would you agree with me either all or many Prime Ministers have set honourable targets to achieve. Whether they achieve it or not is another set of story.

Shafee: Now, Tan Sri, you would agree with some of these targets set by various Prime Ministers, DSN is not an exception, there have been occasions where some of these targets failed miserably. For instance, let me give you an example. We have the Bank Bumi scandal at one time. It wasn’t the intention of the Prime Minister at that time, but it happened. You agree with me?

Ali: That was during Tun Mahathir’s era.

Shafee: I see. Then, we have, it became an enquiry that the Forex problem where the allegations of losses of billions. Correct?

Shafee: Correct? Okay now, you also agree that whatever is the Forex problem, the overriding intention is perhaps very good. You agree with me?

Ali: That’s what I read from the report, Your Honour. Yes.

Shafee: Yes, from your knowledge being the top public servant.

Shafee: The intention may very well have been good but somebody didn’t execute it well. Yes?

Shafee: One more example, perhaps a lot more earlier there was a lot of talk about Malaysia trying to conquer the world tin market. Quite some time ago, when you and I were in the University in the same year. Now, that too, the intention was good for Malaysia to conquer the tin market, but it failed miserably. You agree?

Shafee: Now, you agree with me Tan Sri, while the Prime Minister set broad policies at macro level, the execution of these policies were to be taken by executive at a micro level?

Shafee: Tan Sri, various KP of MACC had been lawyers before, some illustrious name I can give to you like for instance the late Tan Sri Harun Hashim, a very eminent High Court judge who became the Federal Court judge subsequently but he was in fact in MACC? Correct?

Shafee: Then you have a few candidates, they were all lawyers, government service lawyers, who were appointed to be Ketua Pengarah MACC, correct?

Shafee: One was Zaki Hussein?

Shafee: There are many Tan Sri Mahmud but this is Tan Sri Mahmud who was in legal and judicial service. Alright, now, Dato Dzulkifli was a senior member of the AGC, is that correct?

Shafee: And you can't say that he is not qualified to be the KP of MACC, nobody can say that.

Ali: Yes nobody can say that.

Shafee: Nobody can say that because he is eminently qualified to hold the post, it's up to the PM?

Shafee: Another PM may do the reverse, may do another appointment. Correct?

Shafee; Such as for instance, you can’t question Tun M appointing Latheefa Koya to be the MACC Chief. The most, what we called it, shocking news. But it is the prime minister's prerogative. Correct?

Shafee: Can you say that Tun M has got an agenda in appointing Latheefa Koya?

Ali: Only he knows.

Shafee: That’s a good answer. Only he knows. Now, when you want to choose the AG, you agree with me AG must be someone at least very competent in the field of criminal law. If you want to take a private practitioner to be an AG, he has to be at least competent in the field of criminal law. Such as, perhaps Dato Seri Sri Ram, if he wants to take somebody from private practise, you agree with me? It's up to the PM.

Shafee: But the PM chose Tommy Thomas. That was his choice wasn’t it?

Shafee: Was Tommy Thomas someone who practiced in criminal law?

Shafee: Nobody knows because he hasn’t done that. Now, that is the PM’s prerogative. You agree with me?

Shafee: You can’t question. Now, the AG Tan Sri Apandi was appointed because or rather he was appointed when he was still the FC judge, one of the senior federal court judges who was invited to be the AG, you agree?

Shafee: And you agree Tan Sri Apandi was eminently qualified to be the AG?

Shafee: Nobody can say he hasn’t done criminal law. He has walked through the field in criminal law, become the judge, magistrate and session court judge in all fields, you agree?

Shafee: Right. Now, you know there was an issue between the PM then with his Deputy who is now the current PM. We don't have to go into unnecessary guess work. Tan Sri, you have heard of what is ‘cabinet collective responsibility’, you have heard of the term?

Under Tun Dr Mahathir, the Bank Bumi BMF and forex loss scandal happened. Failures of policy can be attributed to implementation at micromanagement level.

On appointing people to position, the power to appoint lies with the PM that he could appoint someone unqualified. The erson used as example was Latheefa Koya as MACC Chief Commissioner.

It was all on Mahathir.