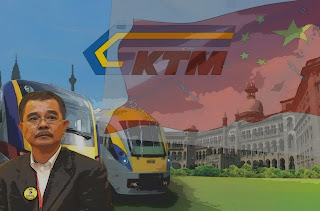 One of their many grouses is China. In January, RUM President Abdul Razak Md Hassan warned government to stop the flood of China trains. The union repeated the same call to protest a plan to purchase the problematic Locomotive Dalian and Six Car set (SCS) trains. Razak claimed most China purchases were not made on open tender but direct negotiations.

Their concern against China dates back to the days of BN. When PH came to power, they look towards new Minister Anthony Loke with the hope of change. PH's campaign tagline "selling the country to China" in their GE 14 campaign was appealing.

Subsequently, Loke began an make about turn in 2019. He was overly excited and today, still is over China's promise to assist Malaysia to build trains and  rail equipment hub South East Asia.

Despite PPBM uttering the same campaign tagline, there was no change in policy when the took leadership of PN government.

Late last year, MoT is believevd to have invited a China company to submit a proposal for Electrical Multiple Units (EMUs). A case of specifications tampered was found.

Cellular economyMuhyiddin is due to make a visit to China and the revised plan for southbound HSR is likely on the agenda.
China have long been eyeing the HSR contract. Recently, Malaysia cancelled the joint development with Singapore to scrap the single asset company arrangement. The excuse was to get local firms involved.
The intention will be clearer with any attempt to ponder the question: Is there any local Malaysian firms with best-in-class expertise for a world class HSR? Destini, perhaps? 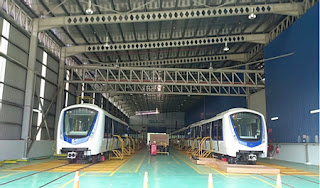 In a meeting on February 23rd, Prime Minister directed Ministries' Secretary Generals (KSUs) to utilise local contractors in the new push for cellular economy.
It is a policy rebranding likely suggested by PM's bevy of theoretical academic advisers he surrounded himself with. The approach is to pursue circular growth over past approach for linear growth.

Theoretically, it should reduce reliance on foreign supply chain. It means more opportunities, developing and assisting local contractors, manufacturer, and suppliers. MoT and KTMB should be considering locals in area they have capability. If necessary, locals need to be assisted, guided, and financially supported to pursue new area of expertise in railway work.

Unfortunately, Muhyiddin fell short in his delivery. The MoT KSU, Dato Isham Ishak invited China in an area local companies with the capability and capacity should be given the opportunity.

Malaysia is not without local railway contractors and train builders.

Before Scomi Rail Sdn Bhd went bankrupt, it was rail system manufacturer specialising in monorails. The company was recognised as one of the world's three leading providers of monorail systems and one of four integrated monorail system providers. They supplied trains to Sao Paolo and local Monorail. 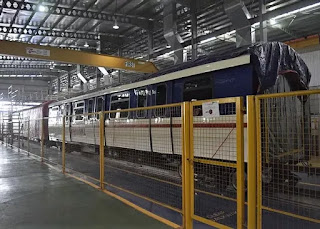 Harthasuma Sdn. Bhd "pioneered the evolution of the local rolling stock industry by supplying the first locally assembled passenger coaches and LRT’s in Malaysia". To date, they have delivered more than 400 cars.

Majestic Engineering Sdn. Bhd been in the business since 1992 and claim as expert in Maintenance, Repair and Overhaul (MRO) of railway rolling stock and components. Hisniaga Jaya Sdn Bhd was  involve in depot and rolling stock maintainance. Apex Communication Sdn Bhd in telecommunication and electical system.

There are more such companies for government to use KTMB contracts to develop on. Collaboration with foreign companies (not just China) should be established to enhanced technical capability, capacity and marketability of local companies for the international market.

Over dependence on China will not benefit the nation in the long run. It is a conduit for corruption, breeds inefficiency, and disruptive to KTMB services, not to mention accumulating losses.

China companies are beginning to be complacent. After 3 years, only one of the 20 locomotive class 29 sent for overhaul delivered. Not only Philipines cancelled orders, Sri Lanka resented trains from China.

If Pakistan can build their own coaches, why not Malaysia? 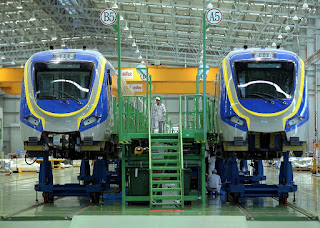 The 38 sets of EMUs costing RM1.9 billion was marred by allegations of corruption in which irregularities exist in the pricing during renegotiation. The tender won in 2008 for RM18 millin for 3-car set finally became RM48 million per 6 car set.

Due to past experience with BN government, RUM initially received Loke with open arm. Loke is still voicing their grievances on the Klang Valley Double Tracking phase 2 (KVDT2) project. According to RUM, there was intervention to force the main contractor to sub-contract entirely to a China company.

However, RUM began to have reservation towards Loke in January 2019. They reminded "the new government not to be gullible when buying trains from China due to issues with similar purchases in the past.

They also cautioned against employing direct-tender method, which PH promise transparency. There were "about 100 train sets, which were bought from China without open tender, between 2012 and 2017" costing a total estimate of RM5.743 billion.

Then CEO and recently returned, Rani Shamsuddin denied the accusation citing the excuse it was purchased by government. All KTM purchases of asset is made by MoF and MoT with KTMB input. It was a weak defense thus it is not a wonder the union protested his reappointment. 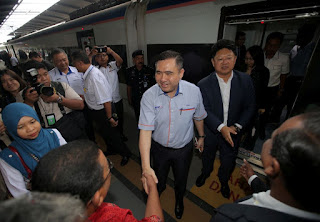 RUM was uncomfortable with Loke's exuberance during his visit of CRRC Rolling Stock Centre in Batu Gajah in 2019, which he described as "railway diplomacy".

Undoubtedly, CRRC's RM400 investment in 2015 to manufacture rolling stock locally is a step towards increasing Malaysia's capability in train manufacturing. The plant has the capacity to assemble 200 trains a year.

Supposedly, there is transfer of technology with 85% of workers are local and sent to China for training. To confirm it is not lip service, there should be local engineers, management, and shareholder in the CRRC manufacturing plant.

The centre could expand activities beyond maintenance or overhaul to engineering parts and whole sets for the ASEAN market. Major cities in the ASEAN region are in need of light rail transit, metro, suburban rail, locomotive and cargo trains.

Loke expressed hope that "Made in Malaysia" trains will be operating in the country and ASEAN countries. Will these countries be receptive to Malaysian made China trains?

In business speak, KTMB may be obliged to provide  contracts to sustain the plant while it pursue market in other countries. The sceptical union described it as marketing gimmick to sell more trains using government to government relation to by-pass open tender.

There could be economic benefit to Malaysia, but the cost could be KTMB becoming total dependent on China. As it is, other local players could not compete on level playing field anf the arrangement weakened their bargaining ability to lobby.

Does the MoT KSU care?