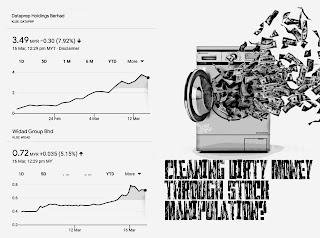 Malaysia Focus dubbed Dataprep as a rags to riches story for 2021 in their article yesterday that it caught the attention of a PLC CEO of an IT company yesterday. According to the Edge Online, the shares went up by 23 times in a mere month.
Regulators cautioned investors because a mere collaboration to provide solution for Covid-19 screening without sufficient details provided is nothing to go crazy over. The frenzy for few more days gave rise to the suspicion there was insider trading or market rigging.
That led Malaysia Focus's expressed concern as to "how the information communications technology (ICT) firm is able to emerge unscathed from the claws of the market regulator." A quick check and taking account of political development leads to the suspicion that it is a money laundering exercise to cleanse black money for political operations.
It could be linked to MPs jumping ship to support Perikatan Nasional, more so involving those dubbed in the political circle as "a cartel member". If not to camouflage, why then would a certain leader be making unnecessary press statement this evening?
Dataprep share movement has the appearance of a "pump and dump" operations, which means the intended transaction could be completed. Typical operation could involve a call and put arrangement with 40% guaranteed return, and the shares could fly like crazy.
Talk in the morning of SC moving in on traders of Dataprep and Widad saw Dataprep took a beating to drop by 19% at the close today. The controlling shareholder of Dataprep is linked to Widad.
Manipulatable
Investors jumping in late with the hope to not miss the boat on a hot tip may have their hands burned. By the time information reaches retail investors, it is no more exclusively theirs. Dispel the thought they are the only one privy to those buy and fly market tip off. The big boys may have known far ahead.
Often than not, the so-called big contracts announced need time to realise its value. For whatever reasons, the risk of profit potential turning to losses to the company is not unimaginable.
In these days of transparent financial disclosure, tight regulatory control, efficient information dissemination, and increasing sophistication in technological and methodology, it is baffling to see volatile share movement of the days of yore could still occur.
Investors are seldom emotionally in the dilemma between fear for losses and greed for gains. It does cloud their judgement to make decisions. However it does not compare to the notion that common folks could do as well as professional to make a living as scalpers.
On the brokerage itself, retail traders are at a disadvantage. Traders at broking houses buy and sell shares without brokerage. Unlike retail investors brokerage of 0.5 to 1.0%, market makers and big boys are paying 0.1 to 0.15% brokerage. Before retails investors could breakeven, these boys have taken what they could have.
Professional traders have the financial capability and the backing of the house to warehouse and off load shares to institutional investors to reduce their trading risk. Retail investors have to absorb the full risk of short term trading.
These days share prices are relatively more stable and valuation more sensible. Supposedly prices move with the performance of the  company. Retails investors do not need to chase shares that do not make financial sense and shrouded in mystery.
Invest sensibly and with an outlook beyond delivery deadline to not be at the mercy of professional scalpers.
Dubious
Surely, retail investors should instantaneously pick on the suspicious nature of the common shareholder/s of Dataprep and Widad. They should be wary on the possibility of dubious unknown hands behind the scene dictating the company, and the game they are playing.
Covid 19 pandemic is not over, but with vaccination program on the way, number of positive reported sliding, and other developments, is it not late in the game to only begin to collaborate?
Supposed it has the contact and influence to secure sizeable contracts, the reality check is Dataprep is a loss-making company. There is no viable basis within the reasonable horizon to have its market capitalisation jump from mere RM100 million to RM2.1 billion within a month.
If that makes no financial sense, so does for Widad, which is doing work at Langkawi jetty, to have the capability and capacity to undertake a RM40 billion tourism related development there without use of magic. Few years back, Widad made an overly ambitous attempt to takeover PLUS for RM5.3 billion. Bigger stories are emerging.
There is insufficient track record and story to convince Tan Sri Muhammad Ikmal Opot Abdullah as a businessman or corporate dealmaker with the midas touch. There is likely more of the unknown than what is known publicly. All seemed rather dubious.
At one time, the hands behind was rumoured to be involved in questionable transaction involving infrastructre development in Kedah. And, sponsoring the Kedah FC could signify reliance on risky political links than business acumen with value preposition for the company.
For retails investors, they are spoilt for choice and should invest in companies and industries they have familiarity and knowledge of its operation and personality. The choice of shares are in abundant and in effect, there are more shares available for investment than the local funds could absorb.
Missing out of an opportunity does not mean entirely missing the boat that one has to jump in and be done with the risk. Look out for laggards and given time, it will get noticed the moment the company keeps churning out profit.
If one can be smart, why be dumb?
Attachments
Edge Online reported: 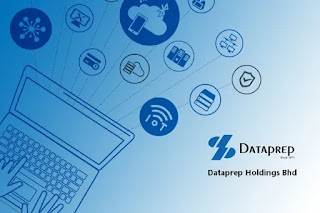 Wong Ee Lin / theedgemarkets.com
March 16, 2021 13:04 pm +08
KUALA LUMPUR (March 16): Wild swings were seen today in shares of IT company Dataprep Holdings Bhd, which has been in the limelight over its share price's meteoric rise in the past one-month period.
On March 12, Dataprep said its subsidiary Dataprep (M) Sdn Bhd had signed a Memorandum of Collaboration (MoC) with an IT consulting and services provider company Asia Coding Centre Sdn Bhd for the provision of integrated solution technology for Covid-19 screening.
Two days earlier, Bursa Malaysia Securities advised investors to exercise caution in the trading of Dataprep shares, which had skyrocketed to RM3.15, from barely 18 sen in early January.
Within the first three hours of today’s trade, the counter had risen as much as 8.97% to a high of RM4.13 and subsequently plunged as much as 29.8% to a low of RM2.66, before it pared some of its losses and was down by 37 sen or 9.76% at RM3.42 at 12.09pm. Some 50.85 million shares were traded as of writing.
It currently has a market capitalisation of RM2.1 billion. This also means the loss-making company had just gained RM2 billion worth of market cap in just a mere month, from when it was barely worth RM100 million prior to the recent surge.
This little-known counter had been, for most of the time, trading below 50 sen since 2005. 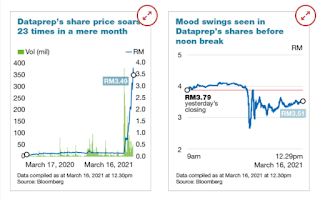 ‘Duit raya’ comes early for Dataprep; a truly rags-to-riches stock for 2021
By Cheah Chor Sooi
DATAPREP Holdings Bhd has indeed journeyed through roads less travelled.
While the company’s meteoric rise maybe baffling, its more gravity-defying achievement is how the information communications technology (ICT) firm is able to emerge unscathed from the claws of the market regulator.
On March 1, Bursa Malaysia issued Dataprep an unusual market activity (UMA) query as its share price rallied to dizzying heights post the Chinese New Year (CNY) holidays.
But the UMA query has little effect to quell interest in the stock, prompting the market regulator to issue a stern caution to investors on March 10, effectively ‘red-carding’ the stock after its price skyrocketed by leaps and bounds from a mere 16.5 sen on the eve of CNY (Feb 11) to end at RM3.15 (intraday high: RM3.33).
But Bursa’s ‘chill pill’ only managed to work its magic for one day – the following day or March 11 – when Dataprep’s stock price edged down 27 sen or 8.57% to RM2.88.
On March 12, the buying frenzy resumed but this time around, Dataprep was well-prepared to hold its ground in the event of ‘further assault’ from the market regulator.
In a Bursa filing that day, the company announced that its wholly owned subsidiary Dataprep (M) Sdn Bhd has entered into a memorandum of collaboration with Asia Coding Centre Sdn Bhd with both parties working as strategic partners r to undertake a project in relation to providing an integrated solution technology for COVID-19 screening for the Health Ministry (MOH).
Aside from revealing that the three-year project would come into effect from March 12, the company made no mention of the project’s value, percentage of stakeholding or how the partners expect to get paid for the services rendered.
But this is suffice for Dataprep to bulldoze forward – effectively to break yet another all-time high of RM3.95 at the early stage of today’s afternoon trading session. At the close of today’s trading, the counter was up 63 sen or 19.94% at RM3.79 with 44.85 million shares traded, thus boosting its market capitalisation considerably to RM2.31 bil.
Also hitching a ride from Dataprep’s price surge is its sister company Widad Group Bhd, which rose 17.5 sen or 34.65% to 68 sen with 392.78 million shares traded, thus making the counter the second most active counter as of 4.40pm.
A darling among retail investors during its heydays, Dataprep which was listed in 1991 had earned the distinction of being the first Malaysian information communications technology (ICT) company to be listed on the local bourse
In the quest to restore interest in the stock, the company’s new management has set its sight on long-term growth potentials, primarily by capitalising on several promising areas under the robustly-growing Industrial Revolution 4.0 (IR4).
For the record, Bumiputera-owned Widad Business Group Sdn Bhd (WBG) acquired the entire 64.2% stake belonging to Dataprep’s major shareholder VXL Holdings Sdn Bhd via its subsidiary Wardah Communication Sdn Bhd in July 2017.
This triggered a mandatory general offer which subsequently raised WBG’s stake in Dataprep marginally to 64.4%.
For its 9M FY2020, Dataprep extended its net loss to RM6.76 mil from RM3.64 mil in the same period a year ago although its revenue was slightly higher at RM23.63 mil (9M FY2019: RM21.07 mil). – March 15, 2021