Najib can afford a smile of relief 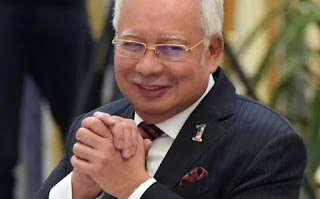 After few years of disappearance, the lady facebooker, who defended 1MDB galantly, Lim Sian See has returned to the social media. Her latest is on US goverment blocking Dato Najib access to court document related to Goldman Sach admitance to giving bribes to 1MDB and government officials.

Soldier such as former JASA officer, vocal and combative, Tun Faisal turned his back to attack Najib, openly collaborating with PPBM to topple Dato Zahid Hamidi, and not shy to support UMNO-oppressing Tan Sri Muhyiddin and his Perikatan Nasional government.

LSS remained steadfast and loyal to the cause than the many other Melayus. Recently she wrote her view on SRC for the upcoming ppeal date. (reproduced at end of this posting). Could her re-emergence be a sign of renewed confidence for Najib as he faced the harassment of legal charges?

Last Monday, Najib can afford to smile in court on the AMLA related court application involving the police raid against him from the night of the first Ramadhan in 2018. Its giving police, MACC and prosecutor quite an embarassment.

Zeti expose, Goldman Sach case in US, Ambank fines, and the AMLA cases against UMNO, few divisions, and leaders are showing it was political persecution all along. 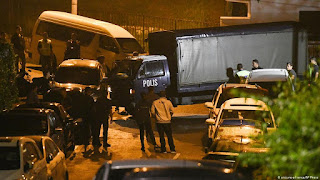 It has long been known that other than SRC, all the 1MDB and related cases had no money trail as evidence.

Despite the viralled chart of money trail involving said to be prepared by Bank Negara, the money movement from the long term bond to Jho Low's Good Star Limited are not verifiable money trail for the court.

More astute 1MDB watchers are aware of the position of AGC and MACC albeit without political pressure for prosecution from Atoq and Abah or legal thriller script of Film Director Gopal Sri Ram. Only SRC offers a possibility for conviction. Unfortunately, Justice Dato Nazlan Ghazali blew it.

Najib started to smile on the exposure of Tan Sri Dr Zeti Aziz's family admitting in a SD to the Singapore authority to receiving bribes from Jho Low in Singapore. Thanks to Tan Sri Muhyiddin boo boo on an infrastructure decision.

Recently, a twitter revealed something this blogger was made aware few months ago that Tan Sri Muhyiddin's son, Fakhri may have received money from Jho Low.

Najib been smiling in court when the judge dismissed police's allegation to dispute UMNO money held in trust with Najib and existence of UMNO's black account. The allegation was made without any shred of evidence.

Definitely, Najib could be smiling at the failure of DPP to prove any of their allegations in which quite a few are outrightly bizarre.

For one, they alleged all money given to UMNO divisions, branches, NGOs and politicians are subsequently withdrawn to be given back to Najib. But no supporting evidence.

In the latest court development, Utusan Malaysia reported UMNO's defense lawyer, Datuk Hariharan Tara Singh argued that none of the RM114 million cash confiscated from the Pavilion condominium was proven to come from 1MDB.

The incident that brought smile to those previlaged to gain entry into court was the conclusion by Superintendent Foo Wei Min that the money came with the list of luxury goods, thus it must from 1MDB money.

Another laughable point is Tan Sri Shafee Abdullah's highlight that the affidavit by DPP Jeffrey Ong mentioned the seized money and goods are not related to 1MDB. A clear conflict with the application requested by police.

Not reported in MSM but mentioned by a court watcher FBer, goods are seized from Najib but neither him or his wife are being named as respondent.

Instead Obyu Holding belonging to Tan Sri Bushtari Yusof is being made one. Police is applying to the court to remove the right of Obyu over cash seized amounting to RM680 million.

The goods are seized from the premises belonging to six different people and only that of Najib and Rosmah.

The bigger laugh is that bulk of the many luxury goods particularly handbags that became the butt of political jokes from pro-PH leaders and supporters belonged to Puan Sri Cindy.

Rosmah's own that was raided are only few.

After three years, police still could not link it to 1MDB but insist on holding on to the money and goods. DPP have prepared the case but were not able to immediately reply to the arguments presented by Hariharan and Shafee.

It should have been done the next day but judge Datuk Muhammad Jamil Hussin gave the DPP ample time till March 28th to answer.

It openly proves that the prosecutions be it SRC or 1MDB or AMLA cases against UMNO leaders are a charade by Atoq. And, Abah is also a party to it. He is playing dumb as though he does not interfere.

The progress on the case of Dato Dr Zahid Hamidi's case is turning out to be  charade too. Six prosecution witnesses turned hostile to reveal being harassed and coached by MACC. The secretary responsible for preparing the cheques admitted to falsifying Zahid's signature.

Save the detail for later as it has relevance to the current political development.

Dato Seri Azeez Raheem's case too is displaying the shabby work of Tommy Thomas and mere political persecution. Seriously Tan Sri Hamid Bador is an embarassment to the police force and his contract should not be renewed.

Nazlan's uncustomary 800 page judgement was an embarassment. It was indicative of his lack of confidence in his judgement. He did not stress on the trunk and branches but twigs and leaves. Nazlan was replying to every issue raised by defense but left out compelling evidences not in favour of his judgement.

Nazlan repeated use of inference was too glaring to show he was not competent in criminal law. Evidence in criminal cases are based on the principle of beyond reasonable doubt and not civil court principle of on balance probability which allow for judges to infer.

The important element of knowledge for the case was missing and conjured up by Nazlan's inference. One former judge claimed the frequent use of infer is the registered trademark of a former judge. 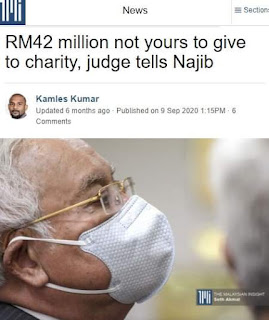 A series of (unrelated) events:

4 July 2018: In high court session, Najib is charged with getting RM42mil bribe (1%) to approve RM4bil loan from pension fund to SRC.

(Najib is basically charged for approving RM4 billion loan in 2011 so that he can get paid 1% commission of RM42mil close to 4 years later at end 2014. Even real estate agents get paid higher percentage and they don't have to wait 4 years to get paid)

4 July 2018: Prosecutors unhappy gag order on Najib to not post anything on social media and not to attend any public events is denied by High Court judge Datuk Mohd Sofian.

"It is a normal routine for a judge to be transferred to another court.”

New judge was only appointed as High Court Judge in the civil courts on the 30th January 2017. Barely a year later, he is now presiding over the highest profile criminal case in the year despite having no recorded experience of hearing criminal cases at the high court level.

2 July 2019: The former SRC director who is a signatory admits that his signatures were forged in 21 bank transfer documents submitted by the prosecution to be used as evidence against Najib.

"Former SRC director admits signatures on documents differed from his own"

However, the forged bank transfer documents involving tens of millions were admitted as court evidence anyway despite the signatory himself testifying in court that it was forged.

Not only were no investigations or police report ever lodged about the faked documents but no one else but Najib was charged for the SRC case.

Not the directors of SRC or the directors of KWAP who actually approved the loans, the person managing Najib's account or the bank officers who was found to have colluded with Jho Low (that's why Ambank agreed to pay RM2.83 billion settlement).

RM42 million not yours to give to charity, judge tells Najib

During sentencing, Judge said that he agreed that Najib did ask BNM to monitor his bank accounts and to warn him if there are any suspicious transactions.

Sept 2020: Former Chief Justice whom during his tenure the judge for Najib's SRC case was changed, starts to campaign for PH Plus in the Sabah state elections.

He was previously in the running to become a candidate for PH Plus but lost out to Darell Leiking.

March 2021: It was revealed that the family of former BNM Governor had received hundreds of millions from Jho Low for many years.

How much did Zeti know about husband’s bank account in Singapore?

Therefore, Najib was sentenced to 12 years jail and fined RM210 mil for getting RM42 mil which was apparently a 1% commission collected 4 years later which was put in a bank account under his own name in Malaysia and inappropriately giving it to charity as it was not his right.

While no criminal charges was ever made against the family of the former Bank Negara Governor who was asked by Najib to monitor his bank account for suspicious transaction had received close to RM700 mil from Jho Low for many years and kept in overseas accounts starting from before 1MDB was started and including funds related to 1MDB.

Not only were no charges ever filed to date in Malaysia against Zeti's family, the PH and PN government had also never told the public about this RM700 mil nor this material information ever given to Najib's defence team in court to be used for his court defence until it was exposed by media based on internal government document leaks.

All events above are NOT fake news and are UNRELATED in any way.

It no fluke too that Nazlan Ghazali did not take into account in his judgement the statements in court of Amhari and Joanna Yu.

So, never close one's heart from any possibility to the path of truth.

Al Fatihah to friends, who passed on, carrying the belief what was reported in the media as absolutely true thus closed their heart from hearing the other side to their accepted version of truth.

May Allah forgive them for the mistake of indirectly allowing oppression and slander out of their own prejudice.

The world is imperfect. All human beings are imperfect, including JUDGES, PROSECUTORS, SPRM, PDRM, POLITICIANS. Only The ALMIGHTY ALLAH is perfect and His plans are perfect. And the truth shall prevail.

May Allah grace you DSNR always.

TQ Tuan... A very good read for me. And revealations that, Insya Allah, be in DSN's favour...