Zeti, Ambank, Goldman and Jho Low colluded for a bite of 1MDB bond 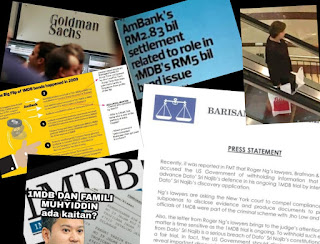 Prior to the commencement of the operations of Terengganu Investment Authority (TIA), the Sultan of Terengganu summoned a then renown corporate figure to the Istana Terengganu off Jalan Tun Abdul Razak in Kuala Lumpur.

The TIA scheme put together by Jho Low was to capitalise the future cashflow of Terengganu Wang Ihsan oil revenue by raising more capital through  the issuance of bond to undertake investment.

The money raised by Ambank through the 1MDB bond issuance was supposed to be invested into Petrosaudi. However, part of the money was redirected into a bearer owned company, Good Star Ltd controlled  by Jho Low. Amhari admitted during the SRC trial that he registered Good Star and is the beneficial owner.

The 1MDB-Tanore case against Dato Najib is on the allegation the RM2.3 billion donation into his personal account came from Good Star.

The Tan Sri flipped through the paper shown to him by the Sultan and commented it looks dubious.

The Sultan's subsequent action to the comment is not known till yesterday's posting by Facebooker Lim Sian See. She gave a perspective by linking current development to past news report.

LSS disclosed Sultanah instructed to stop the bond issue, but it still proceeded. That could have explained why federal government tookover TIA entirely and turned it into 1MDB a year or two later.

The fall of Dato Najib and BN, consequently leading to all out investigation and prosecution of Najib, allowed "Tun Dr Mahathir" version of the scandal to monopolised the public domain. However, the truth remain elusive because for one, the SRC criminal judgement is full of inferences.

The 1MDB-Tanore trial is still on-going, but LSS expose yesterday an eye opener that managed to link the Ambank fines, Zeti family's SD, and Goldman guilty plead to Jho Low. 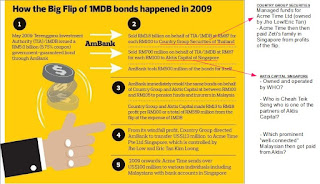 Ambank has agreed to pay the govt RM2.83 billion to settle all 1MDB-related charges against the bank without having to plead guilty or name any executives guilty of any wrong-doing (which is very strange and unfair as it is a pay to get out of jail settlement).
Among all wrong-doings including allowing 3rd parties to take control of the bank account under Najib's name and not informing Najib of transactions, the biggest wrong-doing of Ambank is related to the 1st RM5 billion sukuk issued by 1MDB which is deemed as underpriced and allowed the secondary subscribers to flip the bonds and make profits in excess of RM500 million instantly.
(Ambank was recommended by Goldman Sachs who has agreed to pay US$3.9 billion to settle their 1MDB-related case. Goldman Sachs however, was appointed by TIA (which became 1MDB later on) before Najib got involved with TIA and TIA became 1MDB)
We now know that in the end, only TWO secondary subscribers that were finally selected and made huge instant profits.
1) Thailand listed Country Garden Securities who was acting on behalf of Acme Time.
2) Aktis Capital Singapore who were managing funds for high net-worth individuals.
"1MDB Update: Besides Jho Low, who made millions from the Big Flip in 2009?"
https://www.theedgemarkets.com/.../1mdb-update-besides...
After the flip, Country Group then instructed AmInvestment to send US$113mil (RM464 mil) of the windfall profit to Acme Time Pte Ltd in Singapore.
Acme Time is later found out to be owned by Jho Low and Eric Tan Kim Loong and eventually paid US$16mil (RM65mil) to Zeti's family in their Singapore accounts.

According to The Edge, "Aktis Capital Singapore is an investment advisory and asset manager for high-net-worth customers. Among its partners is Malaysian Cheah Teik Seng, who interestingly was appointed to the board of Malayan Banking Bhd three months after the bonds were issued. Cheah had previously worked at Public Bank, ECM Libra Avenue, Merrill Lynch, Goldman Sachs, UBS and BNP Paribas."
UPDATE: I was told that Cheah Teik Seng does NOT have any family relationship with the then Ambank Managing Director Cheah Teik Kuang at that time but Cheah Teik Seng was co-CEO of Malaysian investment bank ECM Libra Avenue Asset together with Tengku Zafrul.  Mokhzani Mahathir is one of the long-time shareholders of Avenue Assets.

Here is story of Cheah Teik Kuang telling the court that the so-called RM2.6b that Najib received had been returned to the sender 4 months after Najib received it but denies being involved in the return of the money.
"Former AmBank Bhd managing director (MD) Cheah Tek Kuang told the court here yesterday that he was not involved in transactions in former premier Datuk Seri Najib Razak’s AmBank account."
https://www.theedgemarkets.com/.../cheah-denies...
After the bonds flip in 2009, Ambank then sent in excess of US$20mil (RM83mil) profits to Aktis Capital in Singapore who then paid their "high net worth" clients.
The Edge says the beneficiary of Aktis Capital's profit are believed to be "well-connected Malaysians."
Therefore the remaining questions are:

-- Who are these well-connected Malaysians that Aktif Capital made money for from the immediate bond flip? Why is it that the PH and PN governments does not want to reveal these names just like how it had hid the fact that Zeti's family received hundreds of millions from Jho Low?

- Who recommended the secondary subscribers and who in Ambank approved it?

- Who approved the big underpricing and big discounts that allowed two overseas companies to make instant profits in excess of RM500mil in one day from a RM5 billion govt guaranteed 30 years bonds?

- What is BNM as the govt regulator of Ambank doing then as well as who in BNM approved and what approvals did BNM give Ambank then?

- If Najib was mastermind of TIA/1MDB then how come Zeti's family and unspecified "well-connected Malaysians" made hundreds of millions well before Najib ever received a single sen of money that is linked to 1MDB?

* Do refer to LSS original FB message for the links 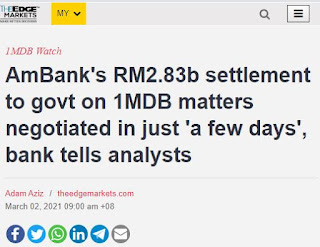 Ambank only took a few days to decide before they decided to pay RM2.83 billion in settlement to the govt. RM2.83 billion is almost 1/3 of Ambank's entire market value. It is also more than 2 years Ambank's net profits.

"AMMB Holdings Bhd (AmBank) was only given "a few days" to negotiate the recently announced RM2.83 billion settlement to the Malaysian government for its involvement in the 1Malaysia Development Bhd (1MDB) fiasco, the banking group said in an analyst briefing yesterday."

In return for agreeing so fast, Ambank (and the govt) does not need to disclose what they have done wrong and who their current and former management had committed wrong-doings. 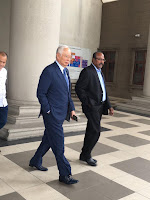 Cannot be that Najib is the mastermind and apparently "stole" RM2.6b (but was returned to sender 4 months later) but Ambank has to pay RM2.83 billion while Goldman Sachs had to pay RM16 billion.

So, Najib was the one who "stole money" but others have to pay?

So, why the speed for Ambank to settle if there is nothing to hide?

Why doesn't Ambank want to fight this in court since lawyers fees would not cost billions of Ringgit?

What was the role of Ambank's management and officers who managed Najib's accounts and what are their relationships with Jho Low and Zeti Aziz?

Did any of Ambank's staff and management benefited from 1MDB or from Jho Low?

And if they have flagged those transactions and reported to BNM then why did BNM (whose then Governor's family received close to RM800mil from Jho Low) keep quiet?

From the SRC case hearings:

1) we now know that Ambank had accepted more than 20 fund transfer instructions with falsified signatures. Even more strangely, such falsified documents were given by prosecutor to court as genuine official case evidence!

SRC trial: Ex-director acknowledges his signatures may have been forged by Nik Faisal in documents

2) the account relationship manager was told to never send bank statements to Najib or to PMO or to Najib's residences.

3) the bank relationship manager and the bank also stopped 30 cheques written by Najib from bouncing including cheques to pay UMNO. If any of the cheques had bounced then Najib would have known something was wrong and checked.

And how can anyone say that Najib is aware of the state of his own bank accounts if he would write cheques to UMNO which would have bounced? How embarrassing would that be as UMNO president and as PM?

If Ambank and BNM had done their jobs, then Najib would have been warned and he would still be PM today. But there were never such warnings from Ambank and BNM.

In the end, no one else except Najib is charged (and sentenced) for SRC and 1MDB.

* Do refer to LSS original FB message for the links

The media and public should ask more questions and apply pressure authority to investigate. Otherwise, the truth will not be known. Authorities will not investigate and hide matters under the carpet. And, there will be victims sent to the slammer. 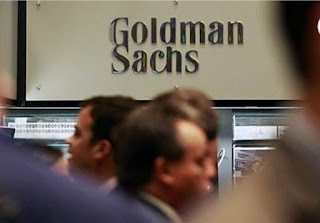 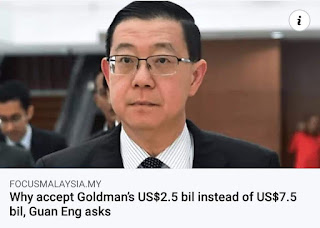 Lim Guan Eng demanded settlement of US7.5 billion but Tan Sri Muhyiddin's government settled it at US$2.5 billion plus guarantee.

According to an FB, Goldman was willing to pay higher than US$2.5 billion. However, there was documents or news report to support that piece of information.

It leads to the question on the role of Dato Rosli Dahlan as lawyer and negotiator.

Though denied by PPBM Information Chief there was any RM500 million commission, why is the non-disclosure clause in the agreement?

If it is not a RM500 million commission, is he paid a legal fee to the tune of RM120 million? 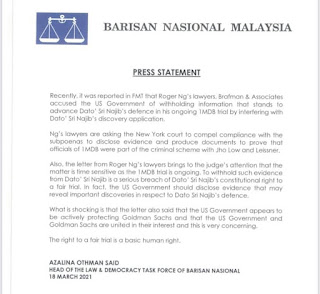 The hot issue remain on Department of Justice denying Dato Najib application for the names of Goldman Sach's bribe recipients.

Goldman pleaded guilty in a US court for bribing 1MDB and Malaysian Government officials and agreed to a US$3.9 billion as settlement. 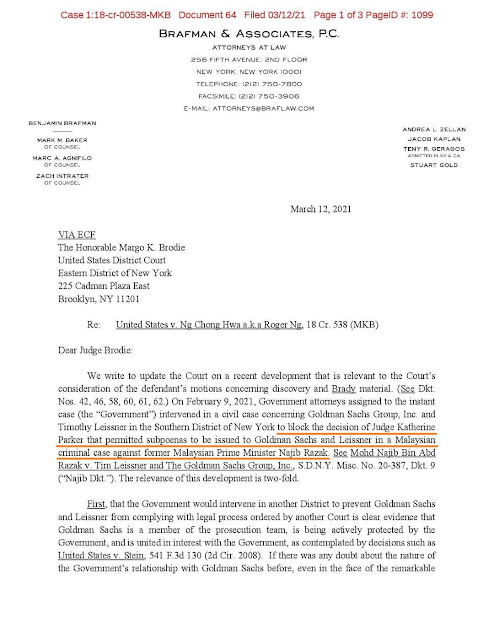 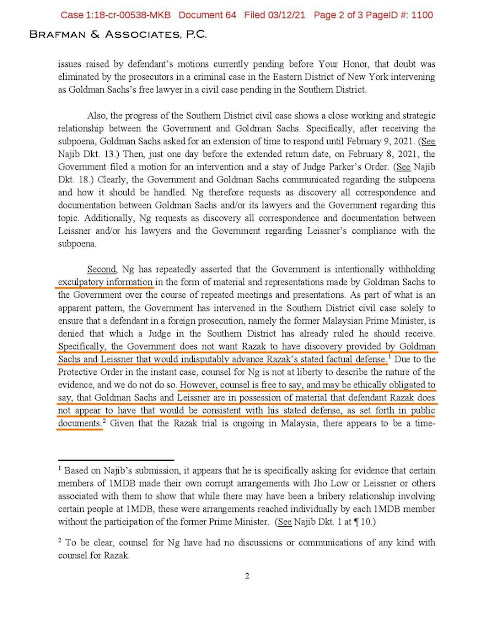 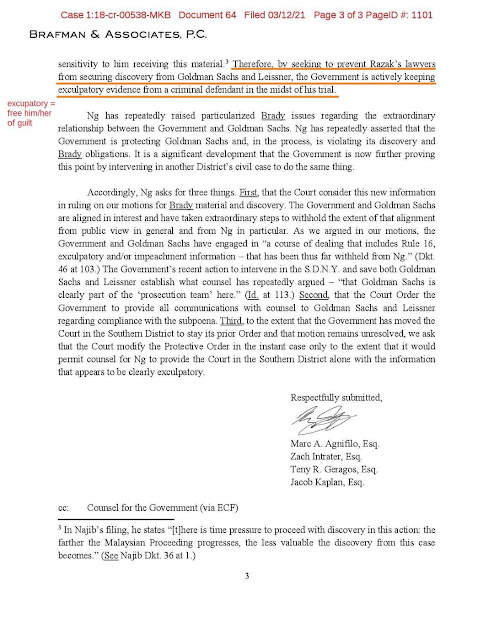 Conspiracy minds would want to know.

Not only the secrecy clause in the settlement agreement with Goldman create a mystery and raise questions, did negotiator Rosli Dahalan, who happened to be Muhyiddin's personal lawyer, insisted on DOJ to keep the names as secret too?

A twitter have been going around implying Fakhri Mahiaddin's name is in it. Anwers the public would want to know.

Or as one Malay newspaperman suspect, all these seemingly disjointed events are merely Najib's orchestration to create public perception able to sway judges to shed himself out of the "kluster mahkamah" and evade being in "kluster penjara".

Truth and justice matter more than perception games or Najib.