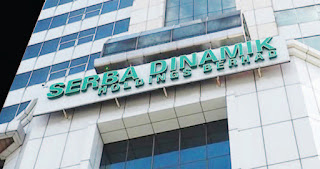 Reopening of the economy is reviving confidence in the market. Serba Dinamik Berhad shares have been gaining attention as it rose by 4 sen few days ago, in which media attributed to company restructuring.
According to Hong Leong Investment Bank, investors will shy away pending the outcome of the Special Independent Review (SIR) report from Ernst and Young (EY).
Is restructuring the main reason or market got hints of the SIR early?
Mohamed Ackiel, Senior Vice President for Special Projects is promoted to Deputy CEO. He led the digital transformation, and several key initiatives and projects in the Middle East, Central Asia, and Americas.
The resignation of five independent members of the Board of Directors in June to protest of the company's lawsuit against auditor KPMG took centre stage in the corporate turmoil at Serbadk. 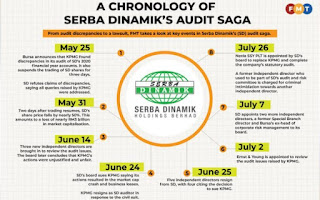 The SIR is expected to be released in October and its already Mid-October.
However, the current interest to Serbadk shares could also be due to a rosy view of the Oil & Gas sector following the rise in oil prices and resolution between Federal government and Sarawak government on the sales tax issue.
It will enable Petros to control natural gas distribution, develop the downstream petrochemical industry, and attract investments in the downstream industry.
The oil and gas industry is not as gorgeous as it used to, but analysts are expecting Serbadk will benefit from Petros plan.
If there was no such accounting hanky panky and the case against KPMG is genuine, the unfinished business is what is the jewel in Serbadk crown that is attracting unsavory elements?
There is a conspiracy theory going around that Serbadk is a creation of high level hands and management and shareholders are currently being flush out for siphoning money out of the company in the billions.
The theory fits in with the Bank force selling on major shareholders and prices suppressed by institutional shareholders selling pressure.
However, sources close to Serbadk management dispel such talk and attributed Serbadk rise to the foresight and entrepreneurship of CEO Dato Seri Karim Abdullah.
More so, management is still on course with their business plan and winning contracts abroad.
For the second quarter 2021, Serbadk posted a revenue of RM1.2 billion with the bulk coming from operations and maintainance activities abroad. A commendable performance when considering the circumstances.
Several media remained sceptical to highlight that its the lowest profit since listing. It fulfill their scepticism and the allegation Serbadk manipulated their profit figure, but it did not tally with their cashflow.
What matter now is Company is still an on-going concern, generating profit, and does not look to be bailing out.
Space and Telco
The second quarter report highlighted EPCC as the second highest contributor and distance third is ICT.
At the end of September, CEO Karim was quoted by Malaysia Reserve highlighting ICT and O&M as contributors that could generate fast cash for the company. It was in response to rising expectation to compliance to ESG (environment, social and governance).
It is an interesting comment at the time Serbadk was launching Very Small Aperture Terminal (VSAT) satellite for a village in Tuaran, Sabah. The initiative was a Proof of Concept collaboration with the Sabah government that could reduce the rural digital divide. 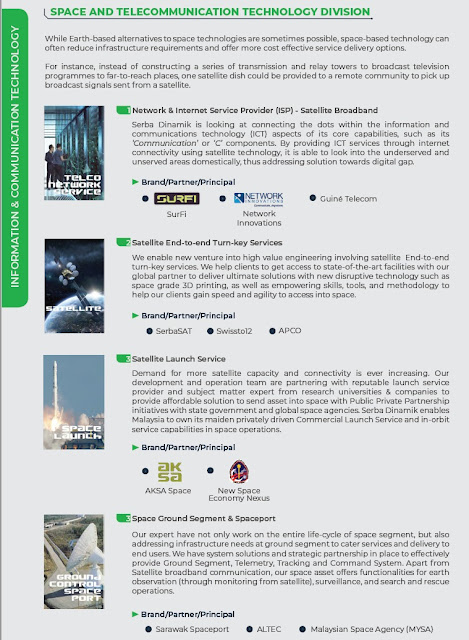 The Space and Telecommunication Technology Division of Serbadk is seldom overlook. Institutional investors simplified to generalise it require large amount of investment to get off the ground.
Apparently, the licences held by Serbadk is the envy of certain characters with vested personal interest in the corridor of power.
Karim had the foresight to position the company into a technology segment sought after to expand the digital reach into the far rural areas of Sabah and Sarawak and the development of 5G.
Serbadk is said to be in collaboration with one of the telco and talking to the rest.
The Serbadk episode reminded of one early starter that got flushed out using the same modus operandi of negative auditor report. It was the opening for politically powerful corporate predators to do hostile takeover.
Perhaps it involved KPMG too.
Whether Serbadk is a similar case of a company that "has  something that these predators want", it still has to survive the EY review of KPMG audit.
If it is proven to be as they claimed, KMPG will be doing another financial settlement for audit negligence after the RM333 settlement for audit failure at 1MDB.
It will be a major embarassment for the Audit Oversight Board of SC, Bursa Malaysia, their minions such as Minority Shareholders Watchdog, Pak Pandir EPF and KWAP.
With many authorities reputation at stake, what chance will EY not be swayed by pressure in the same manner KPMG got swayed in their many audit failures local and abroad?
at 10/14/2021 03:25:00 PM