Prime Minister, Tan Sri Muhyiddin Yassin managed to pass through two major hurdles and his premiership seemed secured for the time being.

Since the budget has sailed through, Board of Directors of Khazanah Nasional should be politically secured to meet and deliberate on the Silterra sales pending for approval.

Failing which, it means the political move to oust Muhyiddin is not over. Any sensitive member of the Board knows a wrong decision could terminate their corporate career. If there is any wrongdoing, they could be subjected to latter day investigation.

The budget presentation to parliament, the ensuing debate and its passing last Thrsday took up the media attention for the last two weeks as it may have placed Muhyiddin’s government in quite a predicament.
Now that it is over, for the time being at least, it is timely to relook at the Silterra sales issue again. The talk of selling Silterra to foreigners have not been taken well by netizens. [Read portal MyKMU, blog Captain M, and TV Online.]  Dato Najib too touched on the Silterra sale in his FB.
If netizen aggresive demand to allow for EPF withdrawal to tide rakyat's financial constraint is any indication, Khazanah may need to take heed of their concern. 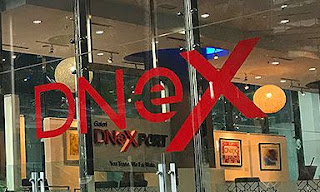 Putting aside foreign budders Foxcomm and X-Tab, the local bidders are DNex vs Green Packet.

DNex was the local owned company invited to plan for Silterra turnaround. They were invited with the plan for takeover and turnaround of Siltera since three years ago.
The decision to invite them may have arised from their past success as a Bumiputera company that successfully tookover Dagang Net subsidiary out of Time Engineering Berhad hand, then held by Khazanah.
DNeX was the sole interested party and strongly encouraged by Khazanah. There we detailed due diligence done and a comprehensive turnaround plan collaborated with CEO and the senior management of Silterra were put forward.
DNex brought in a strong Chinese partner and secured contracted off-take from our partners investee companies that could increase Silterra capacity utilisation from 50% to 85%. Serious capital of RM 500 million be deployed to fix Silterra manufacturing issues.
Term sheet approved by Khazanah with a view to sign SPA within 2-4 weeks early this year. Then new bidders like Foxconn or Green Packet appeared in the bidding process in 1Q 2020 after the final scheme with bid offer is known to the whole Khazanah board and organization.
After much effort made, millions spent, and the benefit of knowledge from the technical and financial proposal plan of DNex, the conveniently unprofessional and unethical Khazanah management changed the goalpost.

This severely put DNex at a serious disadvantage as its plan and numbers would likely have leaked. It is easier for competitors with the benchmark available to up the numbers and better the terms. Their initiative was definitely hijacked and probably stolen by some members of Khazanah board.
If DNex did not improve on their bid, their plan remained the more serious effort by a local to develop a local ecosystem that will benefit the local semiconductor industry.
It could efficiently grow from the current industry segment and without reinventing the wheel and wasteful resources employed.

DNex’s Bumiputera shareholders, management and staff is an attractive criteria and advantage in view of the intended emphasis in Muhyiddin’s budget to return and revive the Bumiputera economy. 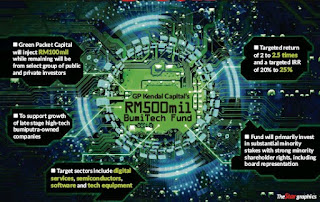 It may have been anticipated by Green Packet that they launched and promoted their BumiTech Fund initiative with a Singapore-based Private Equity firm, GP Kendall Equity Capital.
[The Star news report dated November 12, 2020 is reproduced below as Appendix].

Green Packet is a partner and contributed RM100 million into the RM500 million Fund, which claimed is meant to “support the growth of bumiputra-run, late stage high-tech companies” and emphasise “value-accretive” or in other word, their presence could enable the company to go IPO.

BumiTech Fund is only Bumi by name. It is not a Bumiputera fund, but participating in potential Bumiputera company as “substantial minority stakes with strong minority shareholder rights including board representation”.

It means the deceptively named Fund could control the Bumiputera company till they exit or if financially profitable, take larger control of the company at a latter day when it is conveniently and politically acceptable.
Silterra will be turned into transitory company typically described locally as Ali Baba company, which is basically Ali Bumiputera facade with a "Baba Nyonya" at the back controlling the wheels.

Green Packet's reviewed proposal to Khazanah Nasional is believed to involve Khazanah and another government entity having a significant minority presence.
Together with BumiTech Fund, which is obviously not Bumiputera, the combined equity could give the elusion of majority ownership are Bumiputera.

However, Khazanah or the government entity are not Bumiputera company but government owned entities. The PH experience proves government companies could foresake Bumiputera agenda upon change in government.
If government as represented by Khazanah’s Board agrees to Green Packet structure, it is a betrayal to Muhyiddin’s own policy and the so-called Shared Prosperity initiative. 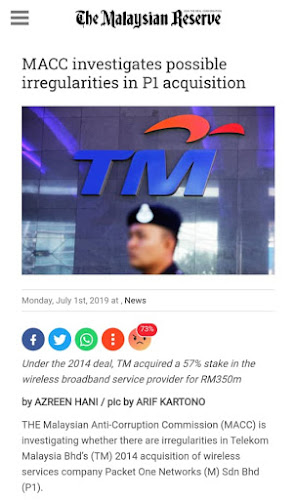 The deal structure by Green Packet leads to their questionable past dealing with one of Khazanah company, namely Telekom Malaysia.
This has been raised and it was reported by media that they were investigated by MACC. Kendal Capital was involved with Green Packet in the questionable Packet One sales to Telekom.
Once lost to Green Packet, Silterra will lose the social agenda attached to it and come exit time, the lesser the bother.

Under Pakatan Harapan, government undertook a massive sales of asset. The prevailing suspicion then was that there were massive kickback for the then ruling parties to build up their political war chest.
Any government asset sales these days are conveniently made at deep discount and in a hurry thus making the sales looked dubious and attract similar suspicion.

Green Packet is involved in a bid and their bid are supposed to be confidential. It should not be disclosed to the public.
Yet they are doing aggressive self promotion and churning news on mainstream media (Star and Sundaily) and several financial and techie media - Stockbit, Digital News Asia and FinTech News.
Such exuberance to compromise ethics does raise eyebrows as to why Khazanah does not care. The manner Khazanah change goalpost on Dnex too raise eyerbrows.
Public, netizen and authority should open their ears and eyes to the manovering of Goh Ching Yin and elitist attitude of CEO Dato Shahril Ridza Redhuan.

PETALING JAYA: Taking the road less travelled, an upcoming private equity (PE) fund is aiming to support the growth of bumiputra-run, late stage high-tech companies in what seems to be untapped investment opportunities.

Plans were underway for Green Packet Bhd to roll out a RM500mil BumiTech Fund through a general partner setup with Singapore-based PE firm Kendall Court, which will be known as GP Kendall Capital Partners.

Green Packet executive director Tan Kay Yen (pic below) said the fund would be looking primarily at bumiputra companies because of the abundant opportunities. 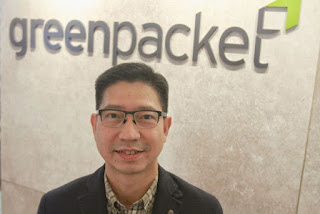 “It’s in the bumiputra space where we feel that there’s an opportunity for public private collaboration.

“This is where we come in in terms of funding support, fostering joint ventures (JVs) and consortiums and then providing the company with the technical know-hows and capital, ” he told StarBiz.

A Joe Biden administration would not defuse the ongoing trade tension between the two countries and experts across the globe believed that the rivalry of the two economic giants may intensify as far as technology is concerned.

The only consolation is, Biden is expected to be less confrontational than Donald Trump, who waged the economic war with China in 2018.

With this plot setting the economic tone over the medium to longer term, South-East Asia and Malaysia are expected to continue benefiting from the unabating conflict which will see more companies diversifying their locations.

Tan said the objective of the BumiTech Fund was to push the companies to upscale, expand their local and global networks and eventually export their technology product and services, which will be vital in line with the exponential growth of IR4.0. 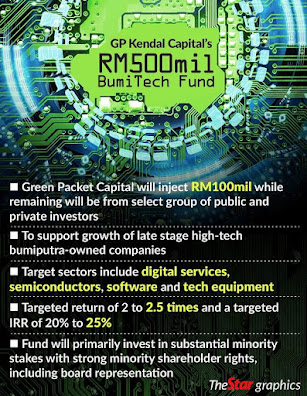 Among the benefits for the bumiputra entrepreneurs would be the upgrading of skill sets, employment opportunities for high-skilled jobs, improving productivity and profitability and to venture into overseas markets. Data from CB Insights showed that investment into the technology space has grown three-fold from 2013 to 2019 and is expected to grow by another three fold between 2020 and 2025.

Most of the investments, around 54%, come in at the seed or angel funding stage and as it moves down towards series C, D and E+, the investments start to taper off.

This is understandable as investors would want to hop on the early ride and when it burns, it would not be that severe.

“They don’t burn off so much money because the early stages don’t require large volumes of investment.

“And this is where we saw an opportunity and why the fund is tailored to focus on the late stage, ” he said.

This presented opportunities to bring the private companies to an initial public offering (IPO).

Out of the 212 listed companies, only 18.5% are bumiputra-controlled.

“They are profitable but they are not at the size that you can go for IPOs or their market is only local. There’s no regional story.

“There is still a lot of growth in the late-stage companies. It’s not that they don’t have the ability, it’s the complacency, ” Tan explained.

Being a limited partner, Green Packet is committing up to 20% or RM100mil to the BumiTech fund, the first of many funds under the general partner setup.

The fund is also soliciting commitments from a select group of public and private sector investors who have strategic or commercial interest in Malaysia’s technology segment and those who are geared to capitalise on the “early mover advantage” to capture attractive opportunities.

The BumiTech fund is looking at around eight to 10 investments at RM50mil to RM80mil each.

In ensuring optimal diversification of the fund’s portfolio, Tan said investments for single projects would be no larger than 20% of the fund size, a maximum of 25% for a particular sector and not more than 25% for overseas business, to ensure that the investments remain Malaysia-focused.

“Why so? Because we want to bring these guys overseas, that’s one of the agenda.

“Green Packet, being a tech company, concentrate on certain areas but we have the opportunities from overseas technology partners that want us to utilise their technology for the Malaysian market or regional expansions.

“We have all these partnerships that we can bring to the investee companies ourselves, ” said Tan.

The BumiTech Fund will primarily invest in substantial minority stakes with strong minority shareholder rights including board representation.

It may also selectively consider acquiring majority stakes in partnership with experienced operators or management teams.

It will also generally invest in the capacity of a value-accretive strategic investor wherein it can provide pro-active assistance towards business development, operational know-hows, effective management and sound governance of its investee companies.

Tan planned to have the first close of the entire fund towards the first quarter of 2021 and the company is also doing due diligence on a few companies that the fund has set its eyes on.

One of its first major investments would be in chipmaker Silterra, should Green Packet be successful in acquiring it from Khazanah Nasional Bhd.

The portion of Green Packet’s investment will come from the BumiTech Fund.

There is no guarantee that dnex will not flip the deal some time down the line.

Nation should reconsider the divestment. We are not divesting a company, but a whole industry. China, Taiwan, korea will never consider doing this. But that's how Malaysia thinks I suppose. Short term and one time 'gain', but the country loses.

Too many twists and turn in the on going saga. PN have their own backers & self vested priorities. Wont be surprised a new name and party come into play not the above named promoters