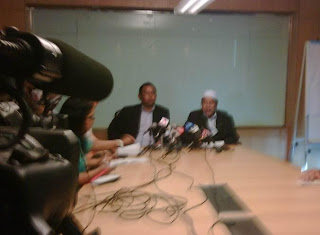 Another bomber came upon PKR today in the midst of their press conference at Tropicana where they had 10 MPs pledging support. Yesterday DAP and PAS pledge support to Anwar to remain as Opposition Leader, no matter what.

A close friend of Anwar, YB Tuan Haji Mohsin Fadzli bin Shamsuri of Bagan Serai quit on PKR. He expressed disappointment and disenchantment with the direction and practise of the party.


Muhsin, who was wearing a white skullcap, cited his disagreement with the position taken by PKR on the issue of Allah as the turning point with PKR. Dato Sallehuddin explained that the party took a position by the arbitrary decisionof few people without a discussion.

All the pledge of allegiances and commitments is still not answering to Dato Sallehuddin Hashim's claim that there are 10 PKR MPs abandoning ship for independent status. In fact today, he expressed the possibility of two third of PKR MPs leaving.

Could those MPs not there at PKR's Tropicana office be the ones leaving? For sure, "Mike" of Kapar and Azan Ismail of Indera Mahkota can forget about jumping ship. BN is not buying them. Who is buying over MPs of a sinking ship?

There is also Tian Chua whose High Court appeal, for his 6 months imprisonment for biting an arresting police officer, will be made known tomorrow. Words are Tian will not appeal to higher court should High Court reject his appeal raising the possibility of a by election for Batu.

How would quiet polite Syed Husin venomous response be like today? Will it be another fodder for a Husin Lempoyang joke? These days everything coming out of PKR, particularly from Anwar sodomy case is funny. ... Mokhtar, C.I.F.U.T. and the latest P.U.N.A.I.

Two years ago, 916 was a source of political jokes. Now it seems the joke is on PKR as it is those within PKR that is doing the 916 on Anwar. And please, no cheap conspiracy and blame it on UMNO, if no reason can be cooked up. Really ma, there's no UMNO hand.

With PKR MPs abandoning PKR, what kind of political senario are we looking at? It's too early to tell.

It could be the new trend of a third force of Independent in Parliament. See what Ibrahim Ali could do single handedly with his Malay agenda

It could also be a temporary refuge for these PKR MPs till a shift in power within PLR from the 3As to a new leadership able to provide a new direction the PKR grassroot yearning for.

Anwar has not been providing a direction for the party in the event he is imprisoned. All resources and party machinery is being harness to create Reformasi II albeit too slow pace.

This author is not convince that it is a power shift to BN. UMNO and BN still got their work cut out for themselves to rehabilitate the party.

How about an intriguing possibility of a wild horse in the name of Ku Li as being promoted by the desperately seeking attention Khairy and with some faint of support from certain Pemuda exco. However, this blogger is not ready to be convince. Too simplistic and not numerically possible.
at 3/03/2010 02:29:00 PM

Mohsin quits right after PKR's press conference convincing people that 12 of its members is not going to quit the party.

Big blow to the PKR. Maybe more PKR members will quit the party.