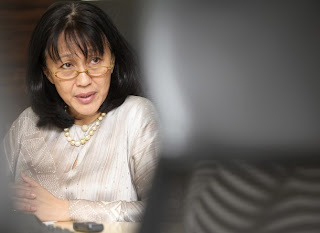 Picking up from Rocky Bru's tip off here of Securities Commission Chairman's Tan Sri Zarinah Anwar seeking renewal, my immediate response is as per written by Bigdog here. She has yet to answer and explain her position on ECM Libra debacle.

Few years have past now, and she is up for renewal.

The feedback received from conversations with few banker and fund manager on her have been good. It is her sheer good luck that those spoken are baik sangka (well intention) people. She was described with great superlatives on her integrity, ethic and work rate.

Perhaps the ECM Libra-Avenue merger debacle is an exception. She was then thrown in the deep end of the pool early in her appointment. Would be good if she could clarify the issue once and for all.

However there is some very upsetting turn of event occuring. Is she trying to play politics to get a renewal? If so, then where lies her integrity?

ECM Libra on my mind

Zarinah should know there are people like this blogger who knows very well that she allowed herself to be strong armed by Khairy and Kalimullah to allow the ECM Avenue scam through.

Secondly, she approved the interested parties in Avenue Capital to vote in the EGM thus severely putting the minority shareholders at a disadvantage.

Thirdly, the whole financial restructuring and takeover scheme is filled with inconsistencies with the Merger Takeover Code.

Finally, Zarinah was shielded by then PAC Chairman, Dato Shahrir Samad from being properly questioned at PAC inquiry. She spoke for 15-20 minitues and her words were as basis for others including Tan Sri Nor Mohamad Yakcop.

Zarinah is a close friend of Kalimullah. Her family re close family friend with teh former Prime Minister now known as Tun Lah.

As much as this blogger was extremely pissed with the way rules are connivingly manipulated to favour politically strong parties in the ECM Libra - Avenue Merger debacle, tightening and making the rules stricter does not serve the purpose in a new proposed ruling by SC.

The Star dated March 23, 2010 reported that a new requirement that 75% of shareholder approval needed to approve an asset and liabilities takeover.

PETALING JAYA: Investment bankers and dealmakers have voiced their opposition to the proposed rule change on the assets and liabilities method of buying listed companies.

An investment banker said: “We are of the view that the minimum assenting level should be maintained at the simple majority level and the veto right should not be allowed.”

It also suggested an additional requirement that not more than 10% of shareholders present can object to the deal.

Under Section 132 (c) of the Companies Act, a buyer only needs a simple majority to take out the assets of the listed company.

This allows the buyer to circumvent the Takeover Code, where the threshold to take over a company and de-list it, is higher at 90% acceptance of shares outstanding that are not owned by the offeror.

This is aimed at protecting the interests of minority shareholders by requiring a higher threshold of shareholder approval before a deal is done.

“Increasing the minimum assenting level and/or imposing the veto right will hinder and stifle merger and acquisition (M&A) activities and consolidation exercises, and in a larger context, would adversely affect our capital markets,” the investment banker said.

He added that by imposing higher approval thresholds, consolidation of the banking industry would also be more challenging.

A second investment banker opined: “We will have to find other ways of doing business and continue to be innovative. It is going to be more difficult to do M&A deals. However, there have been a lot of complaints especially from the minoriy shareholders and the SC’s role is to protect minority rights.’’

A stockbroker said: “It will have an adverse impact on M&As in the capital market. The existing rules already provide adequate protection for all shareholders including minority shareholders.

However, a third investment banker said: “It is a good development to realign our laws with those of the more developed nations. It is fair to increase the threshold to ensure that takeovers are done at fair pricing.’’

Minority Shareholder Watchdog Group CEO Rita Benoy Bushon welcomed the move by the SC to plug the loophole that allows the takeover of listed companies using only a simple majority of votes.

Rita was also impressed with the 10% “squeeze out” clause as it is known in some markets. This refers to the proposal that if at least 10% of voting shareholders oppose the asset sale, the deal can be blocked. “We have been calling for that rule to be implemented in the asset sale situations,” she said.

If clearly stated rules are adhered without waivers being given indiscriminately to friends, do SC need such new rules to safe guard minority shareholders?

Think of the smaller ones

SC should have been more sensitive to the small holders and moniority shareholders. But the nature of her work is such she is socially closer to the industry captains. That is more about her than her responsbility and term of reference.

If there is anything that SC should step in is really about fair market valuation for minority shareholders. Small shares players are not interested to "own" and run the company. What is important is that they do not lose from unfair valuation?

Company valuation should not be restricted to merely asset based or earning based or last market done valuation.

The buck stops at SC and what is to stop SC of waivering rules at 75% level. Is the SC serious to relinquish their discretionary power and be mechanical to the rules about it?

There are rumours going around that these rules does not have any specific intention other than the fact that she wants her position to be renewed.

Coincidently or by design, EON Bank is up for grab and Hong Leong and CIMB are eyeing. Need we remind ourself the strong Hong Leong, Merill Lynch and Earnst Young background of most people in ECM Libra?

Since Kalimullah is rumoured working together with Anwar in toppling Najib, it is worth reminding of some old corporate history.

Hong Leong has a past history with Anwar Ibrahim who assured them continuous presence in the Malaysian banking sector. It is an open secret that the Queks or Kweks will never get a banking license in Singapore as long as 'ole man Lee is still alive.

Does this new ruling has anything to do with EON bank?

In applying the new rule, some quarter is saying Zarinah is doing a strong arm on CIMB Nizar Razak to get abang to renew her contract. Otherwise, she is giving CIMB hell on the EON bank takeover. Now that is politics.

If she start to wield her power on the corporate in such manner on the PM's brother, what would she do to others? Will it mean she turn monster when Najib is no more PM?

Najib will actually let it happened first and gauge the response from the people.
if people are quiet, then let it be.
if people making noise, then he will make up some excuses and replace the dame.

If the dame actually use politics, chances are she will get away as a there will be some non-bumi companies are involved.

So, my take, unless people like you or other blogger spread the news, then most likely nothing happened and everything will be on its way...

Tengku Zafrul sold Avenue to KJ and Kali! That is a fact.

As a "token of appreciation", he was offered a job in Citibank as "Head of Whatever", with a salary of rm100k per month. His job in citibank is simple - DO NOTHING!

After 1 year of hibernating in citibank, he later joined those pirates (KJ and Kali) to become CEO of TuneMoney. After a while, he got bored and made up story in the media that he was "adviced" to leave TuneMoney. But in actual fact is KJ and Kali saw opportunity to acquire Kenanga and as usual they "planted" Tengku Zafrul into Kenanga. Now Tengku Zafrul is the MD of Kenanga Investment Bank. As Zafrul's ex-wife said above, it is a matter of time before ECM Libra will takeover Kenanga Investment Bank.

If this is the kind of CEO that is going to lead Malaysia GLCs, then, GLCs will surely become Guaranteed Losing Companies.

The fact is that Khairy Jamaluddin is a terrible actor.

His acting as if he is hating Anwar Ibrahim his sifu is not working.

He should practice more acting with Maya Karin.

She will get support from all other races and KJ - Kalimullah Tagteam.