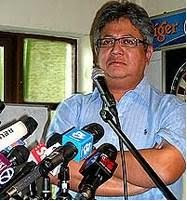 Back in October 19, 2009, this blogger wrote a posting on Zaid Ibrahim entitled Azmin's seige mentality, Another missed opportunity.

This blog has always taken a critical view of Zaid since his less than sincere attempt to bring about judicial reform was nothing more than being Abdullah and Khairy's political errand boy. He handled the Tun Salleh compensation poorly. Basically, Zaid then was in the way of our fight to oust Tun Abdullah.

In that recent posting, despite citing his past habit of leaving things unfinished, the posting was kinder and supportive of his effort for a 2-party system. It may not be good immediately for BN in the near future and it is not easy for Pakatan so-called component parties but it is for the good of democrasy and in the long term, it is good for BN. Perhaps it nothing to do with all that, but just giving face to a friend and the name sake to the first law firm this blogger has ever hired to handle his first deal.

Since then, Zaid has gone back to his usual gullible self. He shot his mouth against Zulkifli Nordin under the guise of freedom of speech which he himself never practise such when he was Minister. It is obvious fringe thinking and super liberal Zaid despise and have ex-to-grind against Islamist in the likes Zulkifli Nordin.

That landed him to face the PKR's disciplinary board. My mental response was, "Here he goes again." He is returning from leave, and judging by his past habit to sulk and quit, Zaid's foray into politics may see an inevitable ending soon.

This article below echoes a similar view to this blogger of Zaid: 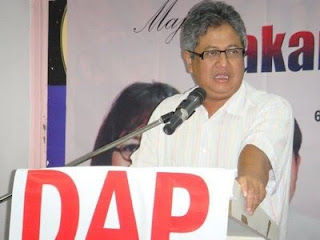 It is easier to fight for one's principles than to live up to them. ~Alfred Adler

It’s been a while since anyone has referred to Zaid Ibrahim as a maverick politician. Perhaps the severe warning from the Pakatan Rakyat’s elders over Zaid’s conduct or rather misconduct and political posturing has taken the wind out of the sails for this one time ruthless defender of Malay rights and beneficiary of UMNO influence.

From an active participant of the Muslim Lawyers Association that was fiercely loyal to the government of Tun Dr. Mahathir Mohamad to expelled back door minister in UMNO to a “severely warned” and on 6 months leave and near partyless Pakatan Rakyat member or soon to be ex-member-his failure is near complete.

Zaid Ibrahim has thus far only demonstrated that he is almost never consistent on where he stands on the issues, never loyal to any one political party and its struggles and is simply not a team player.

But, surely he must have made some political achievements?

With Abdullah Badawi’s total support way back then and subsequently as the rising star who is whispered to be next in line to lead the charge for Pakatan Rakyat into the 13th Malaysian general elections, what tangible results does he have to show for all the political patronage whilst in either UMNO or Pakatan Rakyat coupled with all that goodwill of the Malaysian people and numerous foreign observers whom were cheering Zaid on?

He failed to bring the so-called judicial reforms that he was peddling as an UMNO back door minister and just quit instead of fighting the good fight and has now caused more than a whimper of uneasiness amongst grassroots members and leaders alike in the opposition coalition. Zaid wasn’t of any good for UMNO and has continued in his political failures for Pakatan Rakyat.

Perhaps, Zaid Ibrahim’s outburst when he was the minister in The Prime Minister’s Department as was reported by the New Straits Times, (29.5.08) wherein he was quoted as saying, “You can say anything so long as you do not violate party principles. You are at liberty to talk rubbish, nonsense or real stuff, but you have to follow the rules” – in respect of a debate on the Royal Address between Mukhriz Mahathir and Zaid Ibrahim offers some explanation to Zaid’s current predicament.

This spat that took place in Parliament was with Mukhriz Mahathir and Tajuddin Rahman of Pasir Salak in which Zaid insisted on action being taken against both of these Members of Parliament. Zaid Ibrahim kept asking during a press conference after the spat - “What did Mukhriz mean hit & run?”

Zaid’s singular actions since has proven this point. Abdullah Badawi whom appointed Zaid Ibrahim a senator and then a full minister over and above other worthy duly elected Members of Parliament was repaid in full by Zaid Ibrahim. What a booboo Pak Lah made by choosing him!

The fact is that we expect our politicians to be fighting for us and a better Malaysia and not talking rubbish and nonsense.

Perhaps, Zaid is making an exemption for those elected politicians of which he isn’t-to bar anyone from making the same conclusions about what he spews out. And apparently, it is Zaid Ibrahim who doesn’t follow the rules in UMNO or Pakatan Rakyat having been convicted of money politics by the UMNO disciplinary board amongst other things and now severely warned by the PKR disciplinary board.

He also doesn’t tolerate the principles of free speech if what is said is not to his liking and will even go so far to sack or destroy party colleagues as evidenced by his attempt to get the Barisan Nasional whip to take action against Mukhriz Mahathir and Tajuddin Rahman during the debate on the Royal Address as mentioned above and most recently Zaid’s attack on and call for Zulkifli Nordin of PKR to be sacked.

Not to mention that all the while Zaid himself is not an elected Member of Parliament.

It was Zaid Ibrahim who proved Mukhriz Mahathir right by joining the opposition despite Zaid’s repeated denials of harbouring any intentions of doing so. Thus, with the expiry of Zaid Ibrahim’s self-imposed “leave” from PKR near, all that’s left is to watch the further damage and chaos that he will inflict on the opposition coalition.

If this blogger's reading of Zaid is correct, he will defy the disciplinary board and land himself in bigger trouble. He is not unfamiliar to digging his own grave.

The reality with fringe thinking politicians like Zaid is that they do not go far. They are merely door openers for other more acceptable version of change to the masses.

With him unable to hold himself everytime he feels like talking and thinking he is right, this blogger is reading the end of his political career is around the corner.
at 3/06/2010 12:23:00 PM

Since the time of Tun Dr Mahathir, Malaysian Politics has been beset by Circumstances rather thin Design....

Circumstance may dictate Zaid's Futurem whatever it may be...