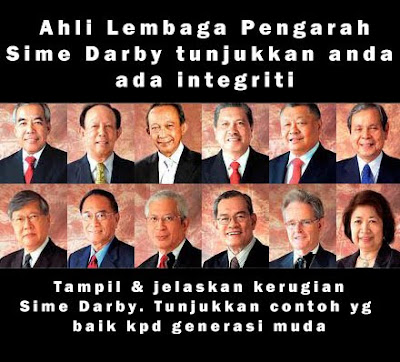 Resign or be sack!
Bigdog's latest posting reminded me of a line in Monthy Python's British standup comedy, bookshop where he parodied Charles Dicken's Tale of Two Cities as A sale of two titties.

Certainly, the negligent and incompetent manner the so-called "illustrious" Board of Directors of Sime Darby carried out their fudiciary duties in Bigdog's latest posting can be described as obscene, repulsive and pornographic.

This is a result of the long practise and culture of appointing members on the Board of PLCs and GLCs as reward for retired politicians and top civil servants. It is like giving flowers to monkeys.

Big Dog was practically launching an already on-going and as good launched campaign to remove the members of the Board of Directors of Sime Darby he dubbed as "The Tale of the Two Tuns, Five Tan Sris and Four Datos".

Why must the illustrious BOD of Sime Darby be removed? Read extract from Bigdog's below:

The stewards who have fiduciary duties over the conglomerate must be accountable. The board of directors (BOD) comprises of ‘illustrious members of the society and corporate community’, with some representing the shareholders.

Having said that, despite of their professional training and aggregate vast amount of exposure and experiences amassed in various capacities through time, they deemed to fail their duties. The convenient blame is when Chairman Tun Musa Hitam told the press, “Management misled us and hid the truth”.

They are members of the BOD. They have the right to ask questions and demand for answers.

If the answers are not convincing enough, then they should talk to the various level of executives. They have an audit committe at the BOD level. They also have the right to interact with the external auditors. 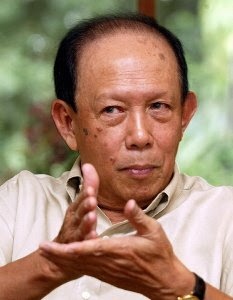 Musa Hitam: Showing the gesture what needs to be done about the BOD?
All of these deliverables expected of the BOD are not without basis. The issues that lurk Sime Darby on the Bakun and oil and gas have been openly discussed in market, even in publications, including here in BigDogDotCom.

Unfortunately, all of these fell out of the radar scope of the ‘illustrious members of the BOD’.

We are not sure.

It is unbelievable these men and lady did not ask Zubir the right questions. Especially when losses that large must be accumulated through time.

There are chartered accountants (Raja Arshad, Mohamed, Barlow), a seasoned banker (Dr Halim) and engineer in the BOD. Four of them were from the pre-Synergy Drive Sime Darby BOD.

The very least, the progress and extension of the projects involved. What is most baffling weren’t they curious the development on these projects, Bakun, MOQ, QP and the marine project in QCC states? 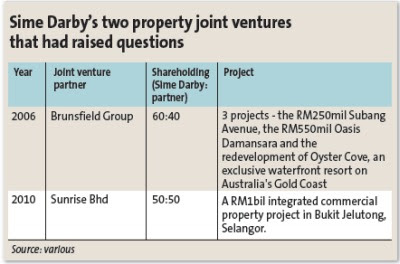 How about the JV ventures with Brunsfield and Sunrise Bhd. and allowed the profits to be shared where else Sime Darby as a seasoned property development group and had all the resources to undertake these projects on its own?

The BOD must be accountable for these and display integrity. They have to go. If not all, the very least most of them.

On the Sime Darby Energy and Utilies losses and scandals, 15 weeks ago here in BigDogDotCom we already demanded some of the BODs be sacked, which include Chairman Musa.

No doubt Sime Darby did show some profits despite the accumulated losses of the four ‘sick’ projects. However, they are supposed to monitor all the developed controls and reporting system which were deemed to be matured and tested through time.

On 7 September 1981, Permodalan Nasional Berhad engineered the ‘dawn raid’ on the London Stock Exchange to ‘bring back’ ownership and control of what is now the Sime Darby Group. British companies which so much from Malaysian resources are now back in the hands of Malaysians, particularly the Malays.

So why is it that Sime Darby still maintain a Brit (Chartered Accountant and British national Henry Sackville Barlow) on the board, knowingly it has been almost 30 years since and Malaysians have been proven to do the job without them?

It is the right thing to do (resign) for the two Tuns, five Tan Sris and four Datos (with the exception of the CEO, the director from Indonesia Dr. Ariffin Mohamed Sirergar and the Company Secretary). If this is about ‘ego’, then it should have ended sometime back.

No other organisation in the country of 600,000 registered companies which include Bank Negara and Petronas has a BOD with such ‘illustrious members of society’ to “be the steward and safeguard the interests of the shareholders”.

And yet, they ‘failed’ the almost 9 million shareholders (this include the 8.9 million members of the ASB and ASN scheme, which the single largest shareholder of the Sime Darby Group).

If nothing is done soon, then Sime Darby will be known as “The Tale of the Two Tuns, Five Tan Sris and Four Datos” where arrogance, pomp and pageantry rules over virtues like integrity and accountability.

The tale is about ‘great and illustrious men’ failing the Malaysian corporate scene.

Responsibility and Accountability in next to all governmental institutions and anything that has a direct link to the government;has been virtues that has lost its value since the 80s, more specifically since the beginning of the rule of PM Mahathir.

The current laments of Sime Darby is just one of too many that has come to the attention and knowledge of the general public. Don't you know that it will not be the last.

As posted in this case, the very method of selecting and appointing staffs and members of the BOD is at the root of the malaise.

The government and the very policies adopted to manage the country and its institutions needs a thorough cleanup and shakeup before we will ever see the lights of day. And not ever until then.

The word "REFORMASI" must be used in all our GLCs n PLCs to clean-up all the dead wood! Don't let the shareholders n investors suffered!
Enough is enough!

Resign? When they have just gotten use to the big paychecks and perks paid for with taxpayers' money?

Not on your life. Maruah is nothing when compared to the $$ sign.

Aiya in this BOLEHLAND, where got accountability one.

See the ruling party politicians, they are not accountable to the Rakyat i.e. 27 million and you expect these 'illustrious' individuals to be accountable for 9 million shareholders??

In BOLEHLAND, there is no accountability and there is no competency. So what you have in the very near future? BANKRUPTLAND

Salam Voice,
Looking at the photos of Sime's BOD members, only a couple looked "intelligent" with enough gray matter left; the rest look like club house regulars with no more neurons left to do any thinking!! What can we expect from these stretched out "illustrious" dead woods? But this is the "typical" BOD make up of our GLCs! The garbage in, garbage out principle applies in all these cases apparently... come to think of it, GIGO also applies to our cabinet ministers with the expected results la... so what's up Mr PM?

VERY SAD :-( I held American Depository Shares for many years and watched my investment dwindle until finally the company paid almost nothing, without giving the investors a choice, and took back the then worthless shares. This list of actors deguised as BOD members should be ashamed of their conduct. Is it any wonder that Malaysia is slowly sinking into an abyss which will eventually bring it to the point of anarchy? So much potential and unfortunately politics seems to rule the day. Why not simply let the Chinese & Indians run the government and corporations and let the Malays sit on the sidelines and collect a fee for having a well run and prosperous society? The Malays are simply not united for the right reasons and the handful of officials have destroyed all that was meant to benefit all citizens of Malaysia. Soooooo Saddddd.