LLBs and CLPs that do not read the law 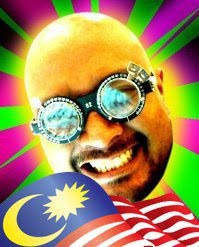 Met Hassan Skodeng himself two nights ago over iftar. He looks calm and confident. Why would he not?

Art Harun had highlighted an important legal point on Hasan Skodeng's charge which embarassingly made one wonders. Does anyone read the law in the Attorney General and MCMC office?

Jeez .. there are supposed to be lots of LLBs and CLPs at the AG office. The Minister in charge for Multimedia have LLB and CLP with a doctoral law degree. How could they miss such an important point?

So, please rid yourself of those old out-dated neurons.

According to Art Harun here, Hasan Skodeng was charged ...

(i) makes, creates or solicits; and
(ii) initiates the transmission of,

any comment, request, suggestion or other communication which is obscene, indecent, false, menacing or offensive in character with intent to annoy, abuse, threaten or harass another person, commits an offence.

Here is the foolishness of MCMC according to Art:

A good friend of mine - a big wig legal eagle in an international corporation - prompted me to the Content Code of the Communications and Multimedia Content Forum of Malaysia (CMCF).

The interesting thing about the content code is its Chapter 2 on "Guideline on Content." Item 7.3 of Chapter 2 says:

"7.3 Content which is false, is expressly prohibited except in any of the following circumstances:

(a) satire and parody;
(b) where it is clear to an ordinary user that the content is fiction."

So, satires and parodies are expressly and very clearly excluded from the definition of "false" content.

Should put the faces of the MCMC people in the dictionary, next to word incompetent and inconsistent.

Can the press ask Doctor of Law, Rais Yatim for comment on this?

So when Bolehland's Morons are in Desperation...they seek their "Master" PR Con-Sultan advisers for help...

That is where the "Details" are overlooked!

"Liberty is unobstructed action according to our will within limits drawn around us by the equal rights of others.

I do not add 'within the limits of the law' because law is often but the tyrant's will, and always so when it violates the rights of the individual" - Thomas Jefferson

"Sometimes it is said that man cannot be trusted with the government of himself.

Can he, then be trusted with the government of others?

Or have we found angels in the form of kings to govern him?

"A Bill of Rights is what the people are entitled to against every government, and what no just government should refuse, or rest on inference" - Thomas Jefferson

This is just the begining...more to come...

I guess they will just argue about the definition of satire and parodies to try make a case of it. Won't be surprised, after watching the video of our 20years+ lawyer experience DPP trying to discredit Dr Pornthip.