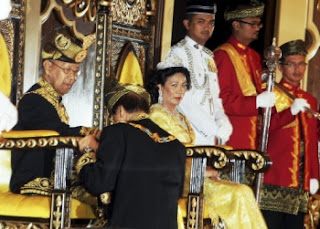 The Sultan of Kedah, Tuanku Abdul Halim Mu'adzam Shah assumes the post of the Yang di-Pertuan Agong for the second time, today.

Tuanku ascended the throne the first time as the 5th Agong on Sept 21, 1970 till Sept 20, 1975, with the late Tuanku Bahiyah as the Raja Permaisuri Agong. I was at the age of 10 and in primary school standard 4 in Johor Baru, then.

His Majesty ascension today should be an interesting event for the likes of my generation, who get this unique chance to experience a former Agong being ascended the second time.

Despite being a Johorean, who usually have such high regards for our Sultan, (for the time being, while we learn to endear the new Sultan, my favourite and much respected will have to be the late Sultan Iskandar), I have always had greatest of regards for his Majesty, the Sultan of Kedah.

It is not merely because of the everlasting impression as a child shaking the hands of a Sultan at the steps of the Masjid Sultan Abu Bakar after Friday prayers in one of his official visit of Johor. I grew up in the compounds of the Masjid Abu Bakar, Johor Baru from 1969 till 1972.

But, much respect for his Majesty comes off from his reputation as an uncontroversial Sultan of Malaysia. No unsavory gossips or rumours is ever heard of his Majesty and the Kedah royal households but only words of respect and regards.

If there is such a thing as a humble Sultan, it has to be his Majesty. I have heard his Majesty's subject described him as one. They complimented his Majesty for his soft spokenness, humility, and concern. Even his living quarter in the istana ground is described as a simple home.

The Star's article today for a special coverage of the coronation aptly described his Majesty:

Concern for his subjects

He said Tuanku Abdul Halim cares about their well-being and always makes a point to ask after their welfare each time they meet.

Azizan said Tuanku Abdul Halim, who has his own office at the state administrative building Wisma Darulaman in Alor Setar, goes there five days a week.

The Ruler, he added, will also attend to all state administrative matters. 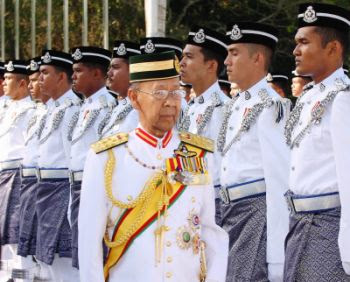 Tuanku Abdul Halim inspecting the guard of honour at the opening of the Kedah Legislative Assembly.
“He would arrive at the office at about 9am each day and return to Istana Anak Bukit for lunch before returning to the office in the afternoon. This is his daily routine,” he said when met at his office recently.

Azizan, who became Mentri Besar in 2008, said once a week, Tuanku Abdul Halim would grant him an audience during which he would brief the Ruler about Kedah's administration.

The meeting will usually be held before the state executive council meeting every Wednesday.

Azizan, who has been a state assemblyman since 1995, said he realised early on that Tuanku Abdul Halim was an extremely resourceful and approachable Ruler who would take the time to read up on important issues affecting the public and country.

“He is always smiling and never shows his temper. He will tell me directly if he is unhappy about anything. He also reads all the major newspapers every day.”

“He is very concerned about the Islamic religion and would attend all religious functions. He has also advised his Muslim subjects to practise the Islamic way of life on many occasions,” he said.

In his address, the Ruler constantly reminds his Muslim subjects to be united in the face of challenges and obstacles.

Azizan said Tuanku Abdul Halim has often times expressed his concern about the welfare of the people and the development of the state.

When the state was hit by major floods in November last year, Azizan said Tuanku Abdul Halim had gone down to meet his subjects and ask after their welfare.

“He also kept himself updated of the latest situation,” he recalled.

By ascending to the throne as the country's 14th Yang di-Pertuan Agong at the age of 84, Azizan said the Ruler is creating history.

“We are proud that he is blessed with good health. We pray that he will continue to be in good health while performing his duties as the Agong,” he said.

Tuanku Abdul Halim has often displayed his concern about public service delivery in the state. When opening Wisma Darulaman's annexe block on Feb 21, 2009, he called on state departments to review their work procedures in order to improve their delivery system.

“I also want civil servants in the state to be knowledgeable about their sphere of duties. This will ensure that they can provide better services to the people,” the Sultan had said then.

I know my friend and Kedah exco member from PAS, YB Amiruddin meets his Majesty regularly and is seldom invited for a round of golf with his Masjesty.

His Majesty first ascension to the throne was historically eventful as the country grapple and undergo the bitter aftermath of the racial riot of May 13, 1969 in Kuala Lumpur. For us living in Johor Baru then, there was nothing felt. In fact, I was attending a sports day in school.

If there is any truth, one rumour I heard as a child then was that he was elected by his fellow brother rulers so Tunku Abdul Rahman, his uncle by rank, could be replaced. Supposedly, it is improper of Tunku Abdul Rahman to bow to his nephew.

But how was the coronation conducted, because Tunku Abdul Rahman was still Prime Minister? Or he was not?

However, Tun Abdul Razak was Director of National Operations Council, heading the Emergency Government after the May 13, 1969 racial strife. 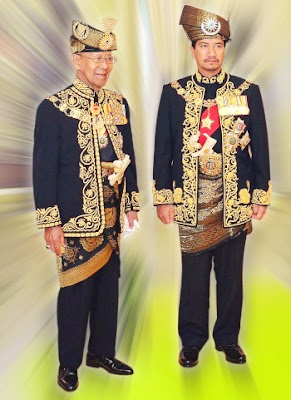 Coincidentally, Tunku Abdul Halim replaced the Sultan of Terengganu on both his Majesty's ascension to the Yang Dipertuan Agong. First time being the Tunku Ismail Nasirudin and the second time is Tunku Mizan.

Tunku Abdul Halim's interesting life and cycle of history is written in yesterday's The Star article, below:

Tuanku Abdul Halim started his schooling at Alor Merah Malay Primary School and Titi Gajah Malay School, and continued his education at Sultan Abdul Hamid College until 1948. He resided in the hostel for two years. He was an active student, and was a school and hostel prefect.

Tuanku left for Britain for a two-and-a-half-year degree course in Social Studies and Public Administration at his father’s alma mater in Wadham College, Oxford University, England. 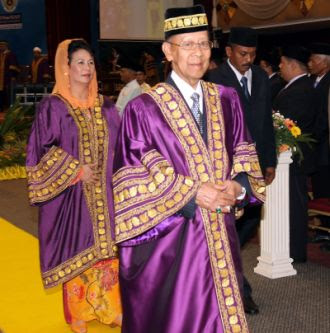 Tuanku was proclaimed the Raja Muda (Crown Prince) on Aug 6, 1949, while still in Britain. When he returned to Kedah in 1955, he served as a Cadet Officer at the Kota Setar District Office and later, the State Treasury in 1957.

Tuanku married Tuanku Sultanah Bahiyah on March 3, 1956. The marriage united, for the first time, the royal houses of Kedah and Negri Sembilan. The royal couple were blessed with three princesses, twins Tunku Soraya and Tunku Sarina (deceased, 1994) and Tunku Intan Safinaz. The eldest daughter of the late Yang di-Pertuan Besar Negri Sembilan Tuanku Abdul Rahman, Tuanku Bahiyah served both as Sultanah and Raja Permaisuri Agong during her lifetime. She passed away on Aug 26, 2003. On March 9, 1957, Tuanku served as the Regent until July 1957. The following year on July 15, he ascended the Kedah throne as the 28th Sultan upon the demise of his father. The Coronation was on Feb 20, 1959.

Tuanku has served as Sultan for 53 years, which makes him the fourth Kedah Sultan to have served for more than 50 years. Kedah celebrated his 50th Jubilee in grand fashion and pageantry on July 15, 2008.

During the first decade of Tuanku’s reign in Kedah, he officially opened the Muda Irrigation Scheme which was the catalyst that enabled the state to increase its rice yield significantly and improved the socio-economic well-being of his subjects.

Tuanku served a five-year term as Deputy Yang di-Pertuan Agong on Sept 21, 1965. He subsequently assumed that role a second time around from Dec 13, 2006, till today. Tomorrow he becomes King for the second time around.

There were many State visits to Britain, Thailand, Bangladesh, Pakistan, India and Iran, among others, during his Majesty’s reign. The Royal Couple were met with admiration and respect wherever they went.

Tuanku played a significant role in steering the country to a more peaceful and progressive state after the tumult of May 13, 1969.

One of the more significant events in Tuanku’s third decade was the Silver Jubilee celebrations of his reign as Sultan in 1983.

The fourth decade saw very rapid industrialisation in Kedah, helped in part by the opening of the North-South Highway in 1988. Tuanku was proclaimed Chancellor of Universiti Utara Malaysia on April 7, 1994.

During the fifth decade of his reign, Alor Setar was proclaimed a city on Dec 21, 2003. Tuanku Haminah Hamidun was also installed as the Sultanah on Jan 9, 2004.

Today, Kedah stands proud as the country’s rice bowl, contributing 60% of its rice production. It has an industrial hub and is also an international tourist attraction, thanks in no small part to Langkawi.

When asked to recall the May 13, 1969 incident, his Majesty's told Bernama, "It was a bitter incident which should not be allowed to recur."

May the country enjoy peace and prosperity with the various races living in harmony under the second reign of Tunku Abdul Halim.

What a surprising development after Hajj; Since when you're a Royalist....???

All the while, we kinda agreed that I am the Royalist and you're the Democrat of not a Republican.

Good that you've come to the dark side of the moon.