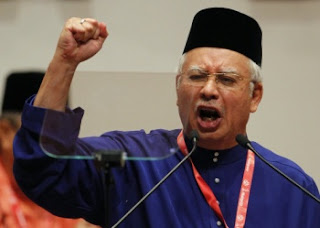 I thought of reviewing the speech by UMNO Deputy President, Tan Sri Muhyiddin Yassin during the opening of the three UMNO wings.

However, I changed my mind and decided to do it together with the President’s speech.

After listening to speech by UMNO President, Dato Seri Mohd Najib Tun Abdul Razak, I could sense his speech will invite different responses from different people.

The speech is fine, facts are good, points are relevant and pertinent, and delivery was well. You are already President. Save the shouting.

So I made my way to PWTC to get a feel. Furthermore I need to pick my media pass and hope to be in the hall for the penggulungan on Saturday.

Except for a few (hopefully it is not another Tok Sahak last year's stand-up comedy), most debates are generally echoes of the President and Deputy President’s speeches.

Dato Najib is open to differences in opinion but it does not seem to come out yet. Perhaps the wings heads and state liaison chiefs have too much control over the debate content.

Not many really stand out as independent and original thoughts. Khairy’s enam jahanam analogy was an echo. I thought his cautionary reminder to his members against complacency was meant for himself.

Dato Mukhriz’s debate was interesting. There was a noticeably different tone to his voice.

When I bumped into a regular penceramah, Anwar-basher and former Naib Ketua AMK to Ezam, Zahid Md Arip near the door leading to the Seri Pacific Hotel, his response after hearing my view was, “10 people gives 10 different responses.”

On my way to PWTC, I bounced it with one seasoned political analysts. Sorry, name can’t be disclosed. He was abroad so the call could be expensive.

Nevertheless, he was fine with the speech. It is quite alright to focus on the members attitude than slugging it out on the opposition. Najib was being realistic. As he did the past few years, he is still reaching and cajoling members and hopefully, they will finally be able to response and react positively.

Earlier, I told one of Dato Najib’s communication man that there are different shades but coordinated tone and messages in the President and his Deputy’s speeches.

What ever it means, I felt the Deputy’s speech was inclined towards “hardware” and the President’s inclination on the “software” of the challenges to the parties.

Upon reaching PWTC, my first response came from political writer and fellow Perkasa, Musli Oli. He was not impressed with the speech. Just last year, he wrote a critical book on Najib with respect to Malay Agenda.

Interestingly later, I bumped into two other political writers, Norzah Kepol and Raihan Sulaiman Palestine who asking about Musli and sharing his political plan.

Much as I wanted to discuss about the speeches, my presence at PWTC was received by friends and acquaintances more as the usual welcoming to Hajj returnees. There were the usual hugs and kisses. Thanks to my blogging, I do not have to talk too much. Seems many read it.

In the evening, we entered the press room.

I made more vocal of my view of Najib’s speech to The Star’s Joceline Tan. Told her I didn’t mind the UMNO historical reminisce. It puts his transformation plan and gamechangers into perspective.

I thought he was too polite. If he can talk of “tikam dari belakang”, he doesn’t have to talk about the other side as party A, B and C.

Coming near to the general election, it should have been a carpet bombing of the increasingly desperate Pakatan Rakyat but aggressive with their many quick hit-and-run perception creating offensives.

Muhyiddin’s speech was giving a fear factor reminder to the wings, particularly to the lackadaisical and syok sendiri Pemuda and Puteri, the implication of losing powers to the Malays.

Wanita is fine and well as backbone of UMNO election machinery. Perhaps that is where the onslaught on the NFC and Dato Seri Shahrizat Jalil is coming from. To be elaborated in another article.

On the other hand, Najib’s speech was more persuasive in nature and from the standpoint of leader for all Malaysian. He was trying to appeal to the common sense and decency of members.

There is a problem there.

The president of UMNO should stand himself as the leader of Malay ummah. Nothing wrong to talk of the plight of the Malay in an UMNO affair. So butt out, Omar Ong.

But it is Muhyiddin talking of the Malays issues. Not that I ever believe there is a wedge between Najib and Muhyiddin. It is just some conspirators political wet dream.

Noticeably, Muhyiddin was doing hard selling and Najib was soft selling to ignite excitement amongst members .

I am of the view that the opposition is scrambling from national issues. The indication is they are desperately repositioning many of their warriors to other areas since they are not able to defend their existing seats.

Najib should have continued the onslaught on the opposition. He should deal with the warlords in private than give the impression of a defeatist party.

I don’t know what Joceline will write but my old school buddy NST Alor Star bureau chief, Nor Adzman Baharuddin is all confident. It is reflective in his article, “Little problem for Najib to find winnable candidates” [Click here.]

I thought the title to his piece is not quite suitable. There is a caveat to his optimism. He wrote, “... wakil rakyat with "problems" should just "excuse" themselves from being chosen as candidates again.”

That message should have been made title.

Without being specific, the general feeling among the press and party veteran is to just pounce away, Mr President.

Be done with all these endless internal problems. To repeat Prof Tan Sri Nordin Kardi’s message at one of those pre-PAU seminars, don’t talk like losers but as winners. The rakyat only vote winners. Those troublemakers too back only winners.

To add to that, one former ADUN from Kedah texted me to say Najib should not look back but move forward with his vision.

And he should talk also about his vision of the general election.

The army need early preparation to cater the general’s 11th hour command. And there is the ground to prepare.

Najib and Muhyidin can say anything now as they won't be there anymore after the GE.

It's time for change

'You are already President. Save the shouting.'

I like that. He was almost croaking - in contrast to the free flow delivery he made in the earlier part of speech.

Dear Sir,
When i heard his speech with full of bunga-bunga and kiasan i stop watching that. In the time of battle we no need that kind of bahasa. I dont mean tht bahasa is not goood but this time is not for melengguk2....NO!!!. I dnt know who are his advisor but the command must be sharp, straight forward and presize.

Didn't you mean Anwar Ibrahim? Because I believe he will be gone before the GE.

Indeed, its time to change the opposition leaders. They are so pathetic.

I could only read half way through yr post bef scrolling to the end. AOB 2.0 is an institutionalist but thats yr call and fits u best. I am overseas, we get GLC visitors to my institution. You should wake up and realize things aren't as rosy as u make it out to be. Btw, most think Najib lacks the mental faculty to make his own decisions, let alone run the country

Kahkahkah! Similar to Tariq Aziz's "the Americans are nowhere near the airport".