Is Najib telling Khairy something? 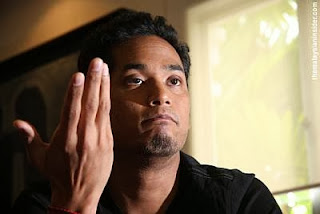 PEKAN, Oct 19 (Bernama) -- Umno President Datuk Seri Najib Tun Razak has advised the victors in today's Umno elections against being overly excited and arrogant but to realise the great responsibility they shoulder in championing the people and religion.

He said they should remain humble and "extend the hand of friendship" to the losers because the Umno struggle demanded a united leadership capable of facing the challenges ahead.

"For the losers, it is not the end of the road. It is a process in the struggle. They should carry on with the struggle and contribute to the party," he said in an interview over the 'Selamat Pagi Malaysia' talk show of Radio Television Malaysia (RTM) before attending the delegates meeting of the Pekan Umno Division at the Sultan Ahmad Shah Convention Hall, here.

Najib, who had won unopposed the post of Pekan Umno Division head, said the elections this time were the outcome of the transformation effected at the 2009 Umno General Assembly in the effort to make the party more transparent and democratic.

An estimated 146,000 grassroots members are eligible to vote in this elections compared to only 2,500 delegates in previous elections.

Najib said he hoped that the elections this time would proceed smoothly and orderly and not spark problems, in the hope that the objectives of the historic decision of amending the Umno constitution in 2009 would be achieved.

The Umno president said it was important for Umno members to discharge their responsibility by considering the eventual objective of the amendment and bring about the desired transformation in the party.

"It is my hope that all the delegates will be able to state their stand in terms of an Umno leadership that fulfills the aspirations of the grassroots," he said, adding that they should vote with their hearts, rationally and objectively, for a stronger leadership.

Since his victory, Khairy's statement have gotten bolder and his campaigning for Dato Hishamuddin had gotten more arrogant. Didn't he said "wajib" for all Pemuda delegates to vote Hishamuddin?

For a self-claimed liberal, Khairy sure does not understand his act is inconsistent with political liberalism.

Then he had or probably his mother, Veteran Housewife Dato Rahmah Abdul Hamid to openly criticise Dato Mukhriz as not haven't gone to the mill.

It is as though she forgot Khairy did not go through the mill in politics but was short circuited up to Naib Ketua Pemuda and heavily backed by the establishment in his campaign for Ketua Pemuda then and now.

Khairy immediately claim his resume as Investment Banker without going through the mill.

Suggest he cool it and realise he has to learn some diplomacy in handling those sports association, Holding on to sports and youth funding may not be effective too.