Three men in a pub

Rub a dub dub,
Three men in a pub,
And who do you think they be?
The son-in-law, the sovereign fund director,
The wicked reporter,
Missed one knaves out, the racoon eyed ex-minister.

It is our version of the nursery rhymes rub a dub dub.

The three weren't hurdling in a pub but cigar divan. Unfortunately, no nursery rhyme or bluesy song came to mind that can rhyme well with divan.

Cigar is smoked to celebrate an occasion. But on Thursday night, it is too early for the three men to celebrate. Although a win is expected, they need to ensure dominance to legitimise their neo-liberal agenda and steer things to Uncle Lee's way.

To hurdle in the midst of a packed political schedule, it must be to give up-dates and information sharing. Subsequently, raccoon-eyed ex Minister will be updated too.

Eric Capton's Tears in Heaven may rhyme but it is not suitable for a posting with lots of  backroom dealing and conspiracies. It needs something upbeat or mysterious feel like slow avant garde jazz. 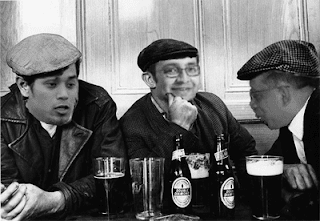 It is strange to find Khairy together with Kalimullah.

It is not so much about Kali being close to Singapore. He was long confirmed to be doing intel work for the Singaporean via their information gathering outfit, The Straits Times. His fellow reporters seem to find his ability to get info as extraordinary. His cover was blown when he did not get security clearance to be late Tun Ghaffar Baba's press secretary. 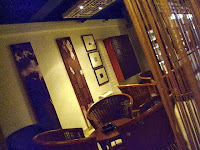 It is strange to find Khairy together with Kali since he has been telling his jalanan supporters that Kali put him in trouble with the Avenue-ECM Libra reverse merger or acquisition and till today still paying the Bank.

If our memory does not fail us, the three original promoters in the acquisition of government-controlled Avenue sold to Khairy apportioned shares on a private basis.

Maybe , we repeat maybe, the borrowing was passed to a Bank. However, Khairy did say he has sold all his interest in the merged Avenue-ECM Libra.

From an opposition party member, who used to have regular chats with Khairy, he said Khairy admitted to have made some during Pak Lah's premiership. The amount is not much and only about RM25 million. He is only a son-in-law. 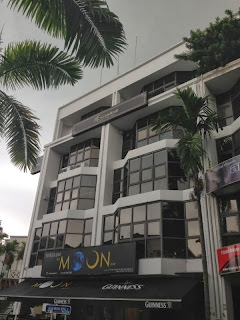 Nothing to worry for Khairy to be seen by his jalanan supporters.

Escobar is on the upper floor. At the street level, one can see the Moon Bar. They serve great pork dishes, this blog here described.

At Escobar, they claim to serve fine cigars and whiskey. Probably beer too but doubtfully any stout as in the ACDSee altered picture above. Even if they do serve any stout, it is not strange.

In Malaysia, anything goes in the food and beverage business. For Kali, it seems he believes in the same spirit.

In the last 13th general election, he was advising DAP. Could Kali be meeting Khairy to give some last minute advise and more?

Since Khairy clamed to still be saddled with his Avenue-ECM Libra loan, one could suspect that Kali could be lending a hand financially for Khairy's campaign. The money is not to make Khairy win but to achieve pencabar sifar (zero defect win). 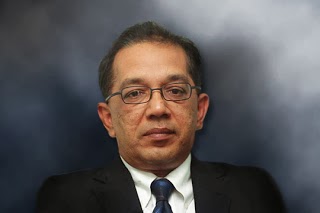 There have been many stories and documents proving unethical electoral practise by the party establishment running the election. Money is also heard to be passing down to bring politik wang to grassroot. [Read Outsyed the Box here].

However, raising it as an issue will be dubbed a sore loser. Khairy was meant to win anyway. It is just un-transformasi that such practises should prevail.

This is leads to the suspicion that the man made powerful and responsible behind the scene to destroy UMNO and it's struggle during the hey days of Tun Abdullah (2003-2008) is still running the show from behind. 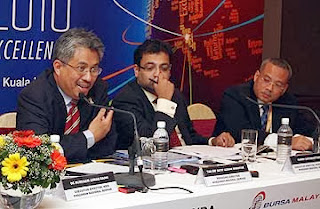 Kali could still be running the show via Khairy. But why is Ganen in that conversation?

In case many forget, he is one of the instrumental names in the Tingkat 4 boys who now roams the Malaysian corporate scene. The man is no more operating with the Tingkat 4 boys from Union Bank of Switzerland, Singapore but now an Executive Director in Khazanah Nasional.

It is not too  difficult to link Khairy and Kali with the Khazanah people. Other than Ganen, there is Managing Director, Tan Sri Azman Mokhtar and Deputy Chairman and Chairman of Management  Committee, Tan Sri Nor Mohamaed Yakcop.

In a conversation with some corporate people last week, we were told that Nor Yakcop is also financing few people running in the UMNO election. All one need to recall are his former officers and those linked to the trimvirate of Khairy-Kalimullah-Pak Lah. 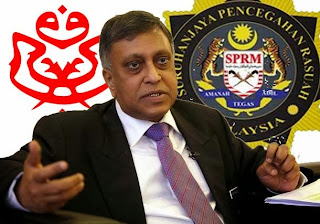 Does it mean that instead of using his money for politics, Nor Yakcop abused his position as Chairman of the management committee to channel some Khazanah fund to certain candidates in the UMNO campaign?

It does not sound right but it is not impossible. Khazanah can fund some program and momentoes and the Auditor General couldn't figure out whether such programs and momentoes were Khazanah's  or politics.

In the meanwhile, Nor Yakcop had always long been close to Kali. Otherwise, Kali and Khairy would not have gotten away in the Parliamentary enquiry on Avenue-ECM merger. The testimony of Nor Yakcop as then Minister of Fiinance II ease the path for them all.

Nor Yakcop remain close with Kali, even after Pak Lah left. They are seldom seen together in Air Asia's functions.

It seems their association is not merely business. The hint we can give is Nor Yakcop is entering into a new realm outside business, government and politics. It could have national security consequences.

At Khazanah, Nor Yakcop is not in retirement bliss. He is up to something and doing some manouvring ever since Dato Wahid Omar left for Prime Minister's Department to take charge of EPU and Dato Farid Alias tookover the helm of Maybank.

If his "horses" do well this weekend on the 19th, he can execute his gameplan. 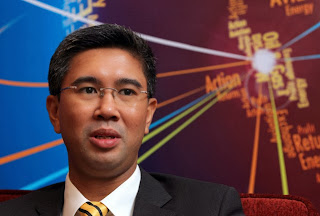 Tengku Zafrul really wanted the Maybank CEO position but Farid beat him to it. Even Farid was not the favourite. It is doubtful that Farid got it because we wrote before to pick Farid and not Tengku Zafrul.

Someone called us to plead for his case but it is not convincing to say he has disassociate any links with Kali and Khairy. Commenting on Tengku Zafrul will surely get us a call again. Nothing to worry, it is a friendly call.

We will continue to argue that when Tengku Zafrul could not get his way, he moves. It doesn't matter that he move jobs ever so often and within a short time like some low level young executives moving for salary increment. Rolling Tengku Zafrul gathers no moss.

He will move because he never had to struggle in his life. Things have been fairly easy and there is someone opening doors for him.


By virtue of  his Perak relationship to Raja Nong Chik, an influential mother in government and nephew to JJ via the wives, it help land him a job as CEO of Avenue Capital, when it was under the auspices of JJ as MoF II.

Tengku Zafrul has resigned as reported by The Mole here. Words are he will be deputy to CIMB's Dato Nazir Tun Abdul  Razak.

Was it Jebat must Die that wrote this transfer within a short time is highly improper. He is with Maybank and jumping to another company within the same industry within less than 6 months.

Will Bank Negara resist when Nazir wants him? 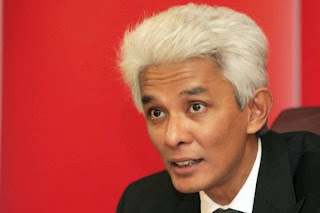 Charon's appointment in Khazanah raises a potential conflict of interest in the light of CIMB long relationship with Khazanah. The conflict include the MAS-Air Asia merger fiasco where CIMB has a big expose and the failed merger was intended to sacrifice MAS to save CIMB's expose.

Check BAFIA, quite sure it is not proper. Rafizi should raise this issue since he should be familiar with BAFIA by now.

The Parliament's PAC ought to be investigating Khazanah and CIMB contracts and how CIMB were considered and awarded advisory jobs, the quantum of fees, fund placed, etc. Could the favour for Charon to be a preemptive move to maintain CIMB's most favoured position in Khazanah?

After PM made his Bumiputera empowerment speech, will having Charon at Khazanah serve to help make GLC more Bumiputera friendly or pi mampus la Melayu! 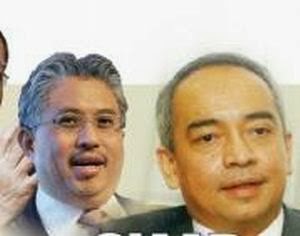 By the look of things, Azman Mokhtar and Nazir are working together towards building a closed knit network emulating a dynasty in Khazanah.

Behind the network are hands like Kali, Nor Yakcop and Khairy. They, including Nazir was part of Pak Lah's legacy still having their hands on the lever of power.

Still wonder why no action taken on NMY and nobody dare to touch him...

Be it najib anwar madey daim and even kit siang... And kj and his boys knew this very well..

i'm sure najib is aware. by not removing pak lah's guy, even after GE13 shows that najib is also in cohort to the whole scheme.

tik tok tik tok....the demise of this govt is nearer than we think.

This all is nor yakcop game plan.....pick his mentee dato seri wahid as his successor just to protect his territory.

I'm wondering what happened to the seasonal barking mad dog who lose the election for youth chief? I meant that Akram s/o Chonit.He dare not even show his shadow. I think he must be hiding behind that paria guy by the name of sayed inside the jamban. I hope both of them are still alive. Hopefully.....

The barking is called campaigning.

Bet your ice age mentality believe that democrasy is for incumbents to win unchallenged.

It is incredible that Akramsyah won only 8 bahagian and yet the power at be see the need to manipulate the media to publish as zero.

And you resort to name calling akramsyah as chonit and syed as inside the jamban. That tells a lot.

3 men in a pub laughing at the umno members..... For buying their zionist liberal ideas.... to make kj as the pm of malaysia