STRUCTURAL MEASURES:
There are ways to solve flood woes

This year, the first wave of torrential rains almost paralysed Pahang and Terengganu. As of Tuesday, there were 10,207 evacuees at relief centres in Pahang and 12,439 at centres in Terengganu.

While natural disasters are unpredictable, are the aftermath scenes what we want to see in a country aiming for developed nation status by 2020?

There are many factors causing floods. Excessive rainfall is to be expected and, as always, floodwaters are contaminated with mud and sewage.

Pluvial floods with little or no warning, and floods with high levels of sewage contamination, generate greater and more lasting tangible and intangible impacts. Inadequate drainage systems contribute to the problem. This affects most parts of the east coast.

There are several long- and short-term measures that could effectively address flood problems.

STRUCTURAL measures. These are engineering methods which include the construction of "super leeves" or high-standard embankments. The embankments are created by applying a layer of filled material over a conventional embankment. Super levees are designed to prevent catastrophic flood damage which could result from breaks caused by water overflowing from the banks, seepage and earthquakes. Super leeves also enhance urban spaces with water and greenery;


CANALISATION and related works. Canalisation includes the widening and deepening of channels as well as lining the banks and beds of channels. They also involve the replacement of undersized structures, such as bridges. These works are necessary as the original channels have become undersized as a result of the increase in flood flows caused by development; 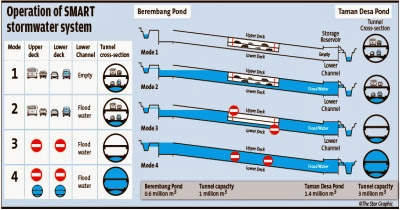 Under such circumstances, excess floodwater has to be retained upstream in storage ponds or diverted downstream through a flood diversion channel or tunnel. For example, the Stormwater Management and Road Tunnel (Smart) system in Kuala Lumpur has become a viable and innovative solution.

The Smart system alleviates flooding in the city centre by diverting large volumes of floodwater from entering it. The tunnel has been designed to incorporate a stormwater channel and motorway for dual purposes.

The motorway section of the tunnel eases traffic congestion at the southern gateway to the city centre near Sungai Besi. This concept is believed to be the first of its kind in the world;


CONTROL dams retain floodwater to protect areas downstream of the dams. However, construction of the dams solely for flood control is not economically viable. Such dams are frequently constructed for other uses, such as water supply and hydro-electric purposes, although some have a portion of their capacity allocated for flood detention; and,


BUNDING of rivers. Bunding prevents overtopping and flooding of the low-lying adjacent areas. This option, too, may give rise to problems of internal drainage as a result of the bunding. For instance, bunding an urban area can turn it into a potentially flood-damaged area as any occurrence of flooding can result in the water overtopping or breaching the bund.

Everybody is getting on the bandwagon now, are they? :)

Lemme see, now. Get the contract for RM100 billion, spend RM2 billion and keep the remainder for my pocket.

No worries, I'll give you some, brader.

P/S I hope you realise this comment is being sarcastic.

Why then did Fuziah Salleh election campaign for government to spend on addressing the flood?