My moment for Mandela


"Bring back Nelson Mandela" was a song played on Paul Simon's 1986 album, Graceland which featured the music of South Africa. The song was sang by Hugh Masakela, one of South Africa's most prominent musicians and an exiled opponent of apartheid.

It was at the height of the anti-Apartheid and coinciding with major turn of event for our own life and career. We had got the opportunity to work abroad and saw the Graceland Tour concert with the above clipping on TV.

Since the 1970s, the only approach to end Apartheid was through international pressure and lobby. No multilateral bombing on fellow whites.

Upon arriving campus, the anti apartheid stickers at the Student Union gave a lasting impression to this newly arrived young Malaysian in 1978. To claim we contributed to the anti Apartheid movement would be overly self praising but we are just glad to claim we participated.

Four years after the album and concert, Nelson Mandela was released from prison in early February 1990, ending 27 years of imprisonment. Mandela was sentence to life imprisonment in 1962 on charges of conspiracy to overthrow the state. From the limited involvement at the regular invitation from a fellow football Intramural teammate and doctorate student, a mestizo South African by the name of Trevor Abraham, we got to know of Mandela and his words of determination during his trial.

Mandela said, "During my lifetime I have dedicated myself to this struggle of the African people.

The little we remember of Trevor was that he came over to New York to do his doctorate after working with a Mining Company.

He got involved in the anti Apartheid movement. And must have been effective that the South African government managed to get a white South African to be on the staff of his Department to 'spy' on him. It was one of those social science faculty.

In an occasion where we treated him to a Malaysian meal, we realised he was quite comfortable with our food and our prank to serve him a hot sambal belacan did not work out. He said he is familar with sambal terasi as called by Indonesian. Then we got to know of the presence of Cape Malays who were enslaved Malays brought over by the Dutch.

There was a feeling of rage to know that Malays were not only colonised and our homeland plundered for it's wealth by the European capitalist colonialist but taken as slave. The European slave traders sourced their slaves from Africa but Malays were brought to South Africa to be slave.

In 1981, when we hosted the Malaysian students' Annual Conference and Reunion, there was an hour and half slot for Trevor. In the film reel (no video or CDs yet those days), Trevor highlighted the plight of the Cape Malay community to the astonished crowd who only realised that we too are victim of Apartheid history. 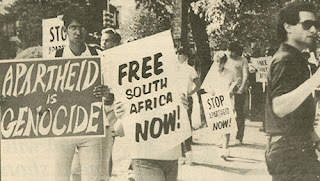 During that earlier phase, the target was to pressure American corporation to divest from South Africa. The intention then was economic pressure would make the country change it's racist and discriminatory ways.

On campus, the divestment campaign managed to get the State University foundation for the whole state to sell all stocks and bonds in companies investing in South Africa. Diana Chappell-Lewis in a special to the New Journal and Guide website here reflected back on that same moment in the anti-Apartheid movement in the US.

The first victory in the divestment campaign was when now Senator Loni Hancock, Democrat from Berkeley, California then as City Mayor pushed the East Bay City Council to divest city funds from South Africa. [Read about it here.]

After pressuring since 1972, by 1979, they did it and became one of the first city fund to divest. That sparked a nationwide pressure which we were only a small party to.

While the nationwide rally in mid 1980s was on going, Afro-American activist managed to get Congress to finally passed the Comprehensive Anti-Apartheid Act of 1986 after decades of pressure. Read in Avoice here.

We graduated, returned home to Malaysia and worked. Real life was beginning and anti Apartheid took a back seat. However, South Africa found a strong backer in our Prime Minister, then Dato Dr Mahathir Mohamed.

The great salesman was not only circling the globe to sell Malaysia and bringing in investment but he became a voice that cannot be ignored. Earlier he made a reputation by being brave to tell the British we are buying you last. For the anti colonial Mahathir, anti apartheid was a natural calling. 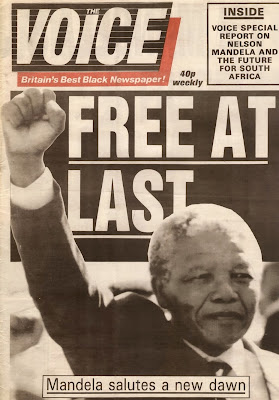 Upon the release of Mandela, he went to meet all the African leaders in Zambia and Dr Mahathir was the only non-African invited. Dr Mahathir relate back that moment in an NST article. Extract below:


Then, in 1990, he was released. Amidst the celebration of the whole world, he went to meet the leaders of Africa in Zambia. I was the only Asian leader to be invited to this African get-together.

Each one of us went to the upstairs lounge to meet him. I was expecting a bitter man, ranting over the injustice perpetrated on him and on his people. I thought if he was not bitter then he must be a broken, dispirited man. 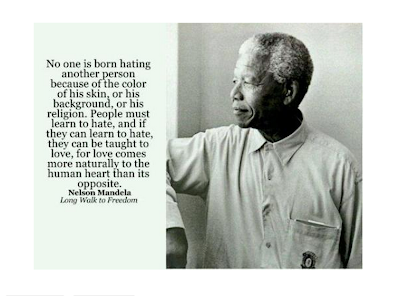 But he was neither bitter nor broken. He was in high spirits. All he talked about was of reconciliation between the blacks and the white, of building a united South Africa, of prospering South Africans, irrespective of colour or creed. No ranting, no anger, no bitterness -- only a deep desire to put things behind and build a future for his country and people.

He was not angry, even against the gaolers of Robben Island. He had befriended them and they made newspapers available to him so that he could follow the developments in Africa and the rest of the world.

He knew a lot about Malaysia, about its independence. But what mystified him was the success of the Malaysian government against guerrillas.

He said that his trainers in Yugoslavia and Libya had told him guerrillas could never be defeated. In the end, they would win. So, how did Malaysia defeat the guerillas?

I explained about the campaign to win the hearts and minds of the people, about securing their safety, about the people eventually turning around to support the government against the guerrillas.

He regarded Malaysia's struggle against British colonialism as similar to the struggles of native Africans against the colonialist. But like most African leaders, he could not picture a former colony of the West developing. It was only after he had visited Malaysia that he believed the newly independent African states could develop. He was saddened by the conflicts which characterised many African countries. He worked hard for peace in Africa and elsewhere.

Mandela was truly a man of peace. He worked hard to curb the anger and bitterness of black South Africans. His towering figure was such that whites and blacks accepted the policy of reconciliation he advocated. No other leader could have done that.

We saw the inaugration of Mandela on CNN. It was really touching. It was a major historial moment for the South African but we felt a sense of achievement. 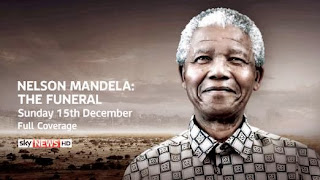 Mandela will return to be buried at his rural childhood home in Qanu, Eastern Cape on Sunday tomorrow. The former President's state funeral is being dubbed as the "first for the country". Dr Mahathir is there to pay his last respect.

It made us think and ponder. Apartheid was an extension of slavery from the past and its evil nature was obvious.

Yet it took so much effort and over more than 40 years for the colonialist orang putih to admit and accept it is wrong and it has to end. But, when they begin to have their so-called moment of conscience on morality and righteousness, the demand immediate change and impose their will on the rest of the world.

Winning the struggle was a triumph but the bigger challenge lies ahead. As Mandela came to realise later, "Nothing is black and white".


The South African economy remained in the strong hands of the white. The country's big revenue earner is De Beer Corporation and Henry Oppenheimer used to control half the nation's economy. Money, wealth and real power was still in the hands of the whites. [Read paper here on post challenges facing post-apartheid South Africa]

The universal suffrage voted by the majority of the white in the 1992 referendum only served to protect their interest gained from long years of injustice on the indigenous people of South Africa. Many of the white migrated to western countries.

One who migrated to Australia wrote in Eureka Steet.au portal, extract below:


The country is plagued by corruption, rampant HIV infection, lingering cross-racial hatred and crime so virulent it provoked my own family to leave our beloved homeland and seek a safer existence in Australia.

While the burgeoning black middle class has redrawn the country's social landscape, millions still live below the poverty line, virtually invisible to those who swept to power — and wealth — on the 1994 elections.

'There was a huge hope that a new dawn was going to come. That sense of great optimism and hope has faded enormously,' lamented Moeletsi Mbeki of the South African Institute of International Affairs in a recent interview with AFP.

She described Mandela as a Messiah but we remain sceptical.

For her to see all the problem faced by the nation and conveniently migrate, it is just unfair. The problems she described arise from the injustice of the colonial past. It cannot just be camouflaged with praises along their new found conscience.


Injurious developments notwithstanding, South Africa's successes are hard to match: it has an entrenched bill of rights and a vigorous, free press in which citizens debate the issues of the day with unbridled assertiveness...

Like a slave we are to adhere to their notion of morality and fair play. However, Mandela truly deserve to be honoured for his legacy.


... I also reflect with tremendous gratitude on the way in which he helped the post-apartheid psyches of white compatriots: his bold, forgiving leadership freed us from shackles we barely knew existed, permitted us to pursue friendships that might otherwise have foundered, gave us good reason to mend our fractured sense of national pride, and enabled us, at last, to live with unmitigated integrity.

There is no more discrimination and segregation in South Africa. But though in power, the blacks of South Africa are still being denied social justice.

Blame it on the colonial past or capitalist or holders of power, real or superficial, the resemblance with Malaysia is undeniable.
at 12/14/2013 04:42:00 PM

The resemblance between the cinabeng and orang putih is uncanny.

When something go wrong, cinabeng will leave the country they have plundered its wealth. Cuma the black south afrcan have not learn about talentcorp yet

Malays in power plundering with the chinese will resemble the corrupt south african politicians kow towing to the oppenheimers.