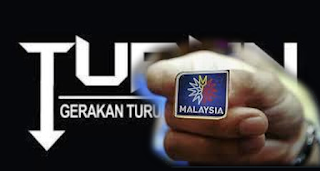 The poor response could be blame on end of the year school holiday. However, there had been a series of poor response with the most glaring one was the Pentas Perdana Anti-TPPA at the same venue on October 10 and the anti-TPPA rally at the KLCC the subsequent day.

One can easily see through the reason, PKR through Anwar's "jambu" boys intention to play the same game as few years before, to hold a protest rally in the midst of revelers during the New Year celebration in Dataran Merdeka. Obviously, it is to avoid the embarrassment of another poor turnout.

Despite the much hype on the Internet and elsewhere, there is that possibility, and an endless one that the TURUN protest rally turnout would not tantamount to much. 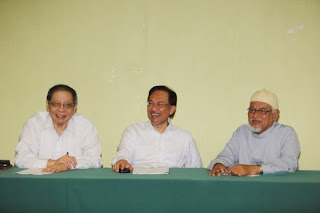 The hunch from seeing Dato Seri Anwar Ibrahim, Dato Seri Haji Hadi Awang and Lim Kit Siang sniggering and laughing at their last press conference together on December 20 is that they are up to something else.

It seems more to be his attempt to downplay the rally call that started out on the note to "topple the government" as spread by pro-opposition social media activists but have changed to protesting the price hike.

To save the embarassment, the organiser had only later introduced the double meaning TURUN to refer to the rally. TURUN could mean demanding government to withdraw the planned price hike or asking the the ruling party or leader to step down.

Rafizi Ramli also denied Pakatan Rakyat's involvement, formally. However, if free, he will attend. As someone consistently unreliable in his words, Rafizi could be lying. The message is equally confusing to the ground "troops" whether to support or not.

The same confusing message from Terengganu. A group of PAS activist in Terengganu, known as GANTI, denied making call to topple the government.

This time around the front for the rally are merely youth and students. One statement on the PDRM social media that one of the organiser is an unemployed. For the benefit of Khairy, this could be a ploy to get more participation from youth which will be dominating voters profile for GE14.

A video promo being spread through You Tube and Social Media potrayed so and the rally was supposed to be NGO driven to emulate the NGOs fronted post-election rally at Stadium Merdeka to protest election result. It indicate that the opposition realised the public is politically fatigue.


It is heard that three of the 'kepala' (organising head of rally) have been going about town to meet various groups for support and people, including the Bersih coalition but couldn't convince them of their strength.


Another mistake the new group made was to use terms and images of Guy Fawkes, Anonymous, similar color schemes, fisted hands images, and Occupy as refered to Gene Sharp methodologies to bring down government.

It only perpetuate the image that they are agents to foreign hands. The last groups like SUARAM, Bersih and many others wish is to have the rakyat be reminded of them being funded by foreigners, notably rouge hedge fund manager, George Soros. 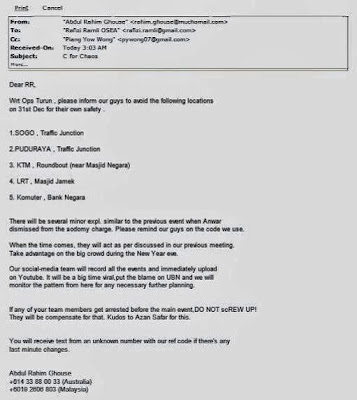 Over the weekend, an alleged e-mail between Rahim Ghouse and Rafizi had gone viral. The email content claim of plans to explode five bombs at the usual points of rendezvous similarly to the incident at the Himpunan Pembebasan Anwar 901 in 2011 had gone viral.

Expectedly, Rahim and Rafizi denied. Yesterday he was called up to give a statement.

To hide his nervousness, Rafizi asked police to investigate the sender of the e-mail in the same manner Datin Seri Rosmah should be investigate for her son, Riza Aziz's purchase of RM100 million condominium in New York.

Rafizi put a bold front to suggest holding a contest on how to write a fake e-mail.

He re-surfaced recently with a series of so-called whistle blowing accusations and exposes but ended up with the whistle stuck to his throat. His allegations were debunked in a matter of hours.

His antics have attracted attention to himself and become a prime target of pro-BN bloggers. If Dato Shahrizat Jalil had not chicken out from her lawsuit, he would have been a has been.

Not to allow Rafizi and also Kit Siang get away with their typical lies, police cannot takes chances when it comes to matter of public security. Be it fake or real, they will investigate.

Police will not allow Latheefa Koya, Surendran, Tian Chua and Nurul have a field to embarass the police should something go wrong.

Rafizi can make a report to the local MACC and their American anti-corruption counterpart to investigate Rosmah and Riza. However, he need to provide more information than just Soros funded Sarawak Report article. Soros fund Global Witness, which in turn fund Clara Brown-led and London based Sarawak Report.

Suspicion on an Investment Banker or a former doing work for his clients, even how insufficiently experience he is deemed to be, is not sufficient ground to make any formal complain. If there is, do so. 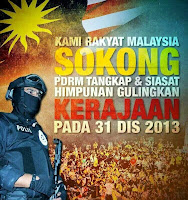 Now, if the plan to 'topple the government', bomb scare e-mail, etc is not true, then Anwar's jambu boys could have been outwitted to get public to support police to take stern action.

Quite sure some opposition yokos like YB Nurul Izzah and YB Khalid Samad will accuse it is the brainchild of the 20 Special Branch officers allegedly stationed in London.

Suggest the additional spin to make it more believable will be to claim collaboration of unemployed former MI5 and KGB agents retrenched due to government budget cuts.

If it is true and thus far, their intention to topple government looks real, even though they denied, then they deserve to be dealt with by the law. Whatever it is, this is the result of repeating the same predictable game ever again.

Indeed, the sniggering between Anwar, Hadi and Kit Siang at their joint PC is something the authorities should ponder over. It could indicate that they could see our side playing the same game of making hundreds police reports, protest and diversions.

They themselves have raised issues against Tan Sri Khalid Ibrahim's pay hike [read The Edge here] and realised that Pakatan Rakyat state governments are equally guilty of contributing to the price raise too. 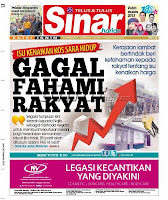 If, and it comes with a big "IF" in this holiday season, the government information machinery and PMO (if relevant) are effective, the price hike rally will fall back to Pakatan Rakyat and Anwar's administrative history.

One professor from a Perak based university said it is too focus on Ministers and top government officials instead of at the unit level.

Despite commitment yesterday by various parties, including the new PAS Youth head to attend the rally, the three could be anticipating the three newbie 'kepala' will fail.

By their sniggering, what are they up to?

An intelligent guess would be they must be thinking that the same tricks by both sides, rainy season and year-end school holiday will not attract the crowd. Nevertless, they are quite happy with the public awareness on the issue they are getting.

Revolution needs an empty stomach but a depleting pocket is sufficient. They felt they have got Najib where they want him to be. To understand that, read this article here by a Rajaratnam School of International Studies fellow.

Or enjoy this humourous video lampooning Anwar in his usual confident and macho mood.


Anwar could be thinking that the effort to sabotage the protest rally could ended up sabotaging Dato Nazri Aziz's 2014 Visit Malaysia Year launch, which are usually held in a colourful display of song and dance extravaganza on New Year at the Dataran Merdeka.

If Najib is lembik....fail to provide the desired leadership for the country....since 2009 nothing happens....flip flop and screwups...WHY IS IT WRONG IF RAKYAT WANTS HIM TO TURUN.....

That is why we should not give the PR free publicity to their 31 Dec do. Without the publicity AND WITHOUT THE POLICE BASHING pictures, there will be no story to go viral. If you do not believe then compare the political repercussions of Bersih 2 and 3. Bersih 3 came and gone.

Since 2009 and after spending 7 billion what has najib deliver....

We just want najib to follow as what pak lah did... To step down and let somebody better lead the country

Dont see the opposition doing any better. The only thing turun is the subsidies that our government had graciously give all these years. Malaysians too manja and mengada now. They think if current gov is toppled they will have a better life....hahahah they better think again.

With the latest measures, everyone is unhappy !

Anonymous said...
This comment has been removed by a blog administrator.
12:01 PM

Express anything u wish but mind your language.

All blog has a host. If u hv no respect for d host, do not expect to have your view heard

I have commented as follows but I

be embarrassed to admit that he is

Mat Pantats [aka arseholes] who

look down on fellow

melayus and Islam. I would be v

grateful if you would

to show that 'áll is

not lost' on the Melayu Cause!


If melayus or matters on Islam are

chingkies [as they are referred

to by my English acquiantances in

to support the criticisms on the

with no sound legal reasoning .


And when the then President of the

to berate the government on

she conveniently overlook to

Bar, one Pund*k Lingham whose

antics in making the Judiciary a

as clear as an elephant in the

So while cheering for the anti-

anti Islam and sharing your feeling

of shame on the inadequacies of

the melayus, you too

conveniently did not see or

elephant in the house...

The Melayus are generally not

worse still , have a poor command

Their causes are not helped by Mat

of their fellow Melayus!

Why is there no public outcry when I see the Head Tokong of Pulau Pinang caressing his shiny Mercedes Benz in pic after pic with the caption that it was bought at a huge discount together with 8 Camrys ? No one alleged it is ....... and ........

In Singapore, www.tangtalk.com, the brilliant Lee Kuan Yew with his 14 failed Policies for Singapore in 1995 together with his family, brothers and sister and in-laws bought at a huge discount condos at Jade Mansion, Nassim Road, Singapore from Ong Beng Seng's Hotel Properties Ltd. His brother, Dr Lee Suan Yew was a Director at the material time. There was a huge public outcry and he had to return the condo to the sellers.