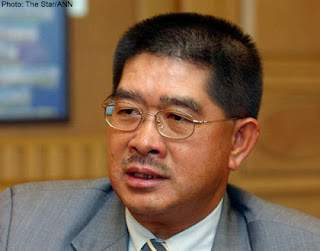 In the the Monday announcement tariff hike by Energy, Green Technology and Water Minister, Datuk Seri Dr Maximus Ongkili, tariff in peninsular Malaysia would be up by 4.99 sen per kilowatt hour and by 5 sen for Sabah and Labuan.

If so, it means the Minister wrongly informed the public!

The NST report on the tariff hike:

Energy, Green Technology and Water Minister Datuk Seri Dr Maximus Ongkili said the tariff in peninsular Malaysia would be up by 4.99 sen per kilowatt hour, and by five sen in Sabah and  Labuan.

He said the initiative was a gradual subsidy reduction not only on electricity but other forms of energy as well.

This move was anticipated after Putrajaya announced its plans to trim fuel subsidies for power producers in the first quarter of 2014.

Meanwhile, BERNAMA reported that  70.67 per cent or 4.56 million of the overall 6.45 million domestic users in Peninsular Malaysia and 62 per cent or 260,000 of the 418,000 domestic users in Sabah and the Labuan Federal Territory, who consumed 300 kWh or less a month, are not involved under this review.

Maximus Ongkili said the government would continue to assist by providing rebates to consumers whose electricity bill was RM20 and below until Dec 31, 2014.


The portal highlighted that TNB's official website current tariff before the new rates are as below: 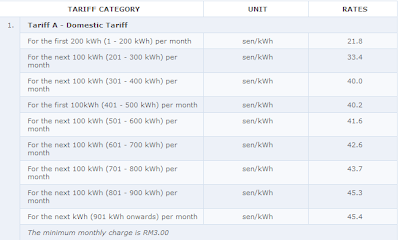