Big Brother MCMC watching over you 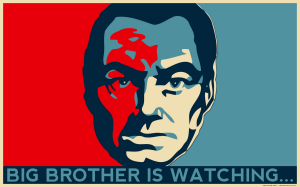 This was recently highlighted by a participant in one of our many Whass App and Telegram groups.

This could have implication to anonymous bloggers. In the past, it provide space to escape lawsuits and the long hands of the law. One blogger in the group said things may not be as easy anymore with domain name is now based in Malaysia.

This technical bit is not something familiar to this blogger. Only suspect it could have came out of collaboration between MCMC and blogspot.com for some localisation. Techincally, it may serve the purpose of reducing traffic on the trunk line to the US.

Could it be that all the storage of bloggers' posting is now in Cyberjaya?

It could send the fear to anonymous bloggers on blogspot platform that their identity and information is no more as secured as using American .com domain.

Not that it is an issue for this blog.

By right, it is time to remove the cloak of anonymity but it is more a personal issue of domesticated tendency of Cancerians.

It is no issue for the likes of bloggers with known identity like http://www.rockybru.com.my/. He had got his own domain for quite sometime.

Same with Firdaus Abdullah at http://www.apanama.my/.

Dato Abdul Kadir Jasin's The Scribe could now be accessed at http://kadirjasin.blogspot.my/ and public figure and veteran journalist like him would not have written on anonymous blog.

His new url is http://syedsoutsidethebox.blogspot.my/.

He puts up his posting but takes it off by the next day. With this change in domain and the suspicion blogspot shifted storage to Malaysia, all that he has taken off is now accessible and could be admissable in court.

Even if that is not the case, he would still be under scrutiny for his persistence to annoy Dato Najib.

Anyway, he could try change the coding. He will have to know html language and do something on the coding below: 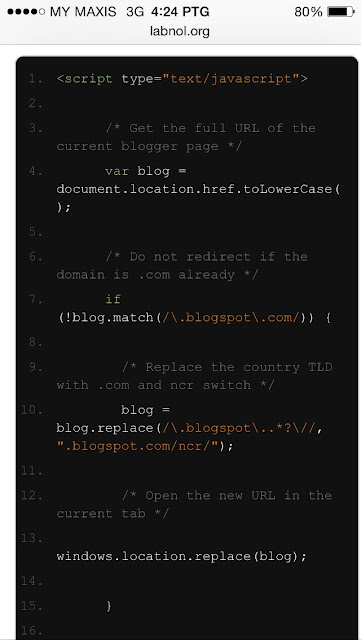 Or he could change to wordpress format.

The local authority may not have reached a collaboration with Wordpress yet, maybe later days.

It could be unnnecessary. After all, the Act governing MCMC is heard due for an amendment. Expect it to be politicsed as cover-up for PM for 1MDB and 2.6 billion alleged donation.

Some will say blogs are not relevant anymore. Why bother?

In the cyber political game, some local experts are saying Facebook and Twitters are on a decline too. While it is powerful in terms of reach, certain aspect of its characteristic make sit unable to sustain a posting long enough to be effective disseminators.

The local flavour is for Whass App, Telegram and latest in vogue during Bersih 4.0 is Firechat which could bypass the Internet. It is highly popular among smartphone users and reaches to the out of town readers betters.

Such social media are useful to promote blog urls.

If one writes fairly and ethically, it is not something to be worried about.

Be honest with your sources.

Avoid cheap spin. These days the public is not as gullible. They could spot one from a distance. If one is suffering from trust deficit, all it takes is one bad spin to lose any more chance of a listen.

These days Utusan Malaysia, Media Prima and TV3 and RTM do not dominate news. Public do not go to the news source but news source must think of a way to reach to the public.

It does not really help even if he deletes his posts as they are always available at Google cache.

It only redirects to .my if the reader is located in Malaysia. If a user visits [blogname].blogspot.com while not in Malaysia or in a country where blogspot/blogger is not localised, it remains a .com.

This is a pro-freedom of expression move bcos if content that violates local laws needs to be removed, it is for the country-specific domain only.