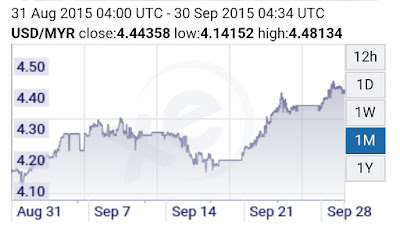 The above is the latest monthly chart.

Ever since Tan Sri Zeti shrugged off her responsibility as Manager of the National Reserve and her role as Central Banker to manage and monitor the Ringgit to pass the buck to government by meddling in politics to ask politicians to end political perpetal quarrel and MoF to sort out 1MDB on September 20th., Ringgit has continued to decline unabated.

Prior to her statement, ringgit had plateau off and strengthen back to 4.20 level. The simple analysis shows she intentionally pushed Ringgit to fall further.

To support this suspicion, did Bank Negara do anything to halt the decline or at least, control the speed of descend since September 20th when trend was steeping?

There is no serious effort to intervene. No significant change in interest rate policy. No persuasion on local bankers.

The interpretation of her statement can be found in previous posting here .


The same thing when it was climbing up to 4.30. Nothing except the statement below: 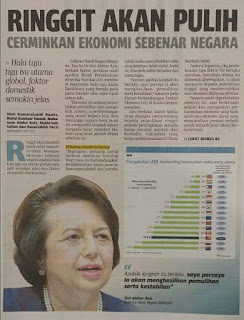 When US/Yen was whacked down in mid 1980s, the then US Secretary of Treasury, James Baker was making statements as frequent as twice to thrice a week.

When G-7 was defending the dollar's steep fall in the early 90s, all Central Bank Governors, Ministers of Finance and US Treasury of Secretary and Britain's Chancellor of the Exchequer made their presence in the media and market felt to stem the fall.

Since criticising her ability only brought out personal attack as the most capable intelligent response, then she is supposed to know what she is doing.

Why is she not doing?

Is it fair to say that she dare not do? If that is not so too, then it means she does not know what to do then?

There is a thing called overanalysis leads to paralysis. And, actions speak louder than words (or Wharton degree or awards and various accolade).

Too clever by half!

And a half-baked analysis, to boot.

What "weapons" does Zeti have in hand to "defend" the Ringgit?

Let's see your analysis on any or all of the above.

Anonymous said...
This comment has been removed by a blog administrator.
1:52 PM

So what's your point?

Are you accusing her of deliberately sabotaging the nation?

Heavy words you're putting there.

Maybe we need to consider if her hands are tied? I just can't shake off this nagging question about those transactions of billions of ringgits into personal account outside central bank knowledge . Who has the power to do that?

it's more because of sentiment la Ajii... Zeti has done her job to stabilize the fundamental part.

better ask your master Goebbel to find a better ways to check the sentiment issue since the Fuhrer keep on taichi ing everything under the sun.

No matter what Zeti does or says, the ringgit will continue its slide down south.

The problem is the Head of Government. His moral authority and integrity, or lack of, are under suspicion.

He might not be guilty of anything as he claims, but the public's tainted perception of him stays.

Until and unless all his problems are addressed one way or another, the ringgit will continue its freefall, and together with it, our economy.

She has at least 10 tools to manage the ringgit. Lazy to take out references and old thesis. The BNM Annual reports is on source.

Didn't say to stop the market trend but to smoothen it and curb excessive speculation as the charts indicates.

SOmeone was saying she done her part. What did she do?

she did nothing..just giving statement to media.. ringgit is ok.. yet PM to be blamed
maybe she is still memorizing the 'sweets memories' with the old 22 years PM..??

And how will they work in a scenario of "risk off" (since we are talking forex traders' lingo), a "flight to safety" and the Fed "normalising" US interest rates?

Is Bank Negara bug enough to "move the market" on it's own like the PBOC, ECB and US Fed?