Bumburing's political narrative does not stand a chance against Anifah's 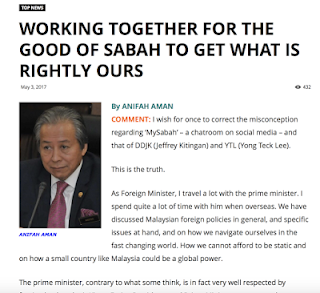 Yours truly was present at the second Forum in Kota Kinabalu in 2015 [read here].

If local graduate Dato Saifuddin Abdullah thinks political freedom is new politics, then this is also a new and more positive politics beyond partisanship that has catched on.

All Parliament support for the North Korea issue recently. Another is UMNO and PAS, two squabbling major political parties are willing to sit together on Islamic interest.Also, non-UMNO BN components' opposition against RUU 355 together with certain opposition parties.

Anifah statement came about due to unhappiness by Parti Cinta Sabah (PCS) with the opposition coalition – Gabungan Sabah (or United Sabah Alliance (USA)), particularly with STAR Sabah - for their president, Datuk Dr Jeffrey Kitingan’s move to push the state rights agenda with Barisan Nasional [Read in The Star here and Daily Express here].

This is not unexpected as PCS President, Dato Wilfred Bumburing was the former Deputy President of UPKO that left the party together with former UMNO Deputy Minister, Dato Lajim Ukin to join Dato Anwar Ibrahim's "Sabah sudah goyang" unsuccessful ploy before GE 2013.

The question is why does it takes him two years to decide. Obviously, it is politics and the general election is around the corner.

Bumburing's PCS is believed to be funded by DAP and PKR through a businessman in a transaction involving a project at Gaya Island and involved Shafie during his days as Minister. Let us save the details for later.

The Kadazan-Dusun-Murut community voting block have a strong affinity towards issues relating to Sabah rights in the 20-points agreement, Projek IC, etc.

Shafie's political handicap is the KDM community thus the reason he brought in lightweight KDM MP for Penampang, Darrell Leiking from PKR. In his days in UMNO, Shafie had supporters "parked" inside PKR as insurance and to do external attack on UMNO to serve his personal political purpose. 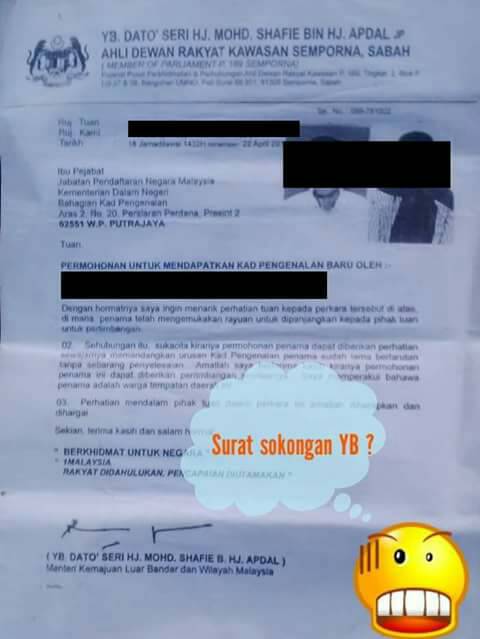 In the midst of the current raid on the National Registration Department by MACC, including the recent raid on their Semporna office, for allegedly giving away blue IC for money, a blog revealed Shafie recommended Pilak (Kadazan for Filipino) to secure a Malaysian IC and citizenship [read here].

Shafie is being remembered for being defensive in his comment during the 2014 RCI on Illegal Immigrants being given IC. It was dubbed as Project IC in Sabah and have always been blamed to Tun Dr Mahathir as part of a clandestine operations to topple PBS, a KDM-led state ruling party.

Party members will not take this new revelation of PCS new partner's involvement in Projek IC. How will Bumburing justify his political decision now?

Frankly, he does not stand a chance against Anifah's narrative: No politics in My Sabah forum, only discussions of Sabah's rights as a state. and I work with the Opposition for Sabahans’ common good.

To all politicians aspiring for success in politics and position in government, get your narrative right and none of those cock and bull spinning.
at 5/04/2017 01:54:00 PM

Leaders should stop being hypoctritical on MySabah and be supportive of whatever efforts are being made to ensure Sabah's rights and assurances are implemented said Dr J in rsponse to allegations that his involvement in MySabah is tantamount to working with UMNO.

For the record MySabah is apolitical. This is the only group that has set aside their politcal ideologies in pursuit of a common goal: to get back Sabah's rights and find solutions to our Sabah problems . Here we interact with leadership personalities, not political parties....and why not? If you believe in your cause and others share your beliefs why can't you sit down and discuss irrespective of your political membrship?

To deny yourself of that opportunity of sharing a common agenda as Sabahans and as human beings is being selfish, narrow minded and hypocritical.

Sometimes i wonder what happens to Sabahans' rationality...are we that politicaly naive to think everything is politics?

Why do some leaders think that it is ok to work with Mahathir even though he is the number one enemy of Sabah's rights...because he is now Najib's enemy? Do they think that simply by replacing Najib by Mahathir you will get back Sabah's rights?

No one, including Najib or Mahathir, will take care of our rights except ourselves. We hv to take upon ourselves that responsibilty.

I no longer believe in the saying..."change first and will negotiate later..." . What is the guarantee that you will get back your rights by that simple assurance? Nothing...for all you know the devil you are dealing with may well be a stronger devil to deny you of your rights than the one you are fighting against. So, be careful.

Let us be rational and realistic in matters of our rights and how best we can achieve them rather than simply playing "politik cari makan."