TI's theory on defense does not eradicate corruption 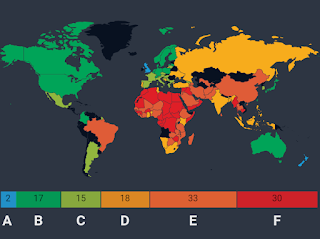 Rhetorics do not eradicate corruption [reads The Mole column here.]

So do manipulating survey and ratings done by TI-M President, Akhbar Satar here to get a negative outcome at a time there were positive serious effort to eradicate corruption.

He should have emulated former DAP MP, Tan Sri Lee Lam Thye here, who as Senior Vice-Chairman of The Malaysia Crime Prevention Foundation gave moral support to MACC for their 3-year deadline to move up the Corruption Perception Index.

Lee highlighted the move as a signal to all political parties to not compromise on graft.

In this respect, the congratulatory message by MACC Director General Dato Dzulkifli came with a bold reminder to UMNO to stay away from graft.

Having said that, Akhbar Satar latest article in the business weekly Focus Malaysia on defense procurement only shows his ideas on corruption eradication is merely academic.

His analysis is flawed, not practical, and lacked a workable solution.

He had once gave the most stupid statement to come from a TI-M President.

With an opinion like this, he will slowly lose his credibility. It makes him a suspected accomplice of a vengeful former MACC Commissioner.

One wonder what is the problem with those named Akbar. It is supposed to mean great in Arabic. 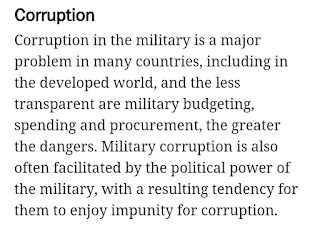 In the article, he highlighted a 2-year old study, Government Defense Anti-Corruption Index (G2015) by Transparency International in 2015 that gave Malaysia a D rating.


Apparently this link here does not think so. So does all countries with high rating (Google result on here).

A nation's defense manifesto (or policy) is made known but how it is executed and operationalise is a secret, not to be shared. It means the assets, specifications, and technical details will never be made known.

His Focus Malaysia article below: 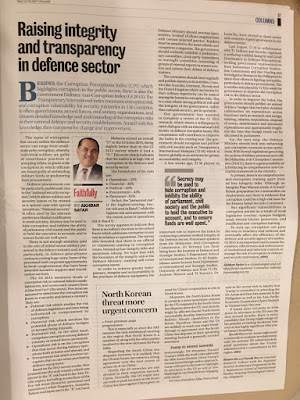 Raising Integrity, Transparency and Accountability in the Defence Sector

Besides the Corruption Perceptions Index (CPI) which highlights corruption in the public sector, Transparency International also publishes the Government Defence Anti-Corruption Index (GI 2015) which is a measure of corruption risk and corruption vulnerability for security ministries in 140 countries. It offers governments, armed forces, civil society organisations, and citizens detailed knowledge and understanding of the corruption risks in their national defence and security establishments. Armed with this knowledge they can press for change and improvement.

The types of corruption that occurs within the defence sector can range from a small-scale petty corruption, whereby individual soldiers are guilty of extortionist practices or accepting bribes, to the grand scale corruption in which officials are found guilty of embezzlement of military funds or profiteering from procurement.

Defence procurement can be particularly problematic due to the ‘national security exception’, which allows military and security issues to be treated as a special case with special exceptions. ‘National security’ is often used by the relevant parties as a blanket justification for avoiding scrutiny. Secrecy may be used to hide corruption, and inhibits the ability of parliament, civil society and the public to hold the executive to account, and to ensure that funds are being well spent.

There is not enough attention being made to the role of retired senior military personnel in the defence industry and, more particularly, in defence procurement contracts costing huge sums of money. Some of the personnel hold corporate appointments in local conglomerates that have been awarded lucrative support and coordination services.

The (GI 2015) measures levels of corruption risk in national defence establishments, and scores each country from A (the best) to F (the worst). There are the five different areas assessed to determine the corruption risk levels in security and defence ministry namely: (i) Political risk which studies the risk of defense legalisation and laws being influenced or compromised by corruption, (ii) Financial risk meanwhile involves the potential abuse of defense budgets or income being misused, (iii) Personnel risk on the other hand comprises corruption among defense ministry personnel or armed forces, (iv) Operations risk is on the corruption that may occur during military operations both home and abroad and lastly  (v) Procurement risk which involves corruption that occurs when purchasing defence equipment.

Based on the 2015 survey results, New Zealand was the only country which was placed in the "A" risk band in the  Asia Pacific region, including across three of the five risk areas (finance, personnel and operations)while Singapore, Australia, Taiwan and Japan are grouped in the "B" risk band.

Malaysia scored an overall “D” in the GI Index 2015, doing slightly better than the GI 2013 survey where Malaysia had a “D-”.  This score clearly indicates that the nation is at a high risk of corruption in its defense and security sector.

The breakdown of the risk are as follows:

This survey appears to indicate that there is no military doctrine in the armed forces which addresses corruption in any way in relation to operations.

The survey also revealed that there is no official or consistent training in corruption issues, beyond ad-hoc integrity talks and awareness raising. We hope that with the formation of the integrity unit at Ministry of Defence Malaysia, trainings will cover corruption issues.

In order to achieve greater transparency, integrity and accountability in the purchase of defence equipment, the Ministry of Defence should practice open tenders, instead of direct negotiations with certain selected parties.

Tenders must be awarded to the most reliable and competent companies.  The government should seriously establish a parliamentary committee cross-party committees or oversight committee consisting of groups of external experts to ensure scrutiny and inform their debate of defence matters.

The committee should meet regularly and publish reports on its activity.  Countries like Australia, Germany, Norway and United Kingdom which are known for their military superiority can be ranked amongst the lowest in corruption risks. This is a case where strong political will and the integrity of the Government, rather than national security, are in question.

The Malaysian Government has assisted to complete a government review of the GI 2015 research, which shows a willingness to open dialogue with an international civil society on defence corruption issues.

This cooperation will contribute to improve the index in the coming year.  The Government should recognize and partner with civil society such as TI-M which is known globally as an advocate for greater accountability and integrity.

A few weeks ago, Transparency International Malaysia (TI-M) played an important role to improve the index by conducting a seminar entitled “Integrity in the Defence Sector” seminar. Prominent speakers from MACC, Dr Bernard Loo Fook Weng from the Institute of Defence and Strategic Studies, S, Rajaratnam School of International Studies, Dr. K.S Balakrishnan, Senior Lecturer from Department of International and Strategic Studies, University of Malaya and from TI-UK, Mr Andrew Watson and TI-Taiwan Dr Ernie Ko, were invited to share issues and concerns of good governance in defence sector.

Last August, TI Malaysia in collaboration with TI-Defence and Security (DSP) has successfully organized a workshop “Integrity and Good Governance in Defence Procurement”, inviting government representatives from Indonesian Corruption Eradication Commission and Fact Finding and Investigation Bureau in Philippines to share their efforts in fighting corruption particularly in defence procurement.

This is another role played by the TI-M to assist Malaysian   government to improve the corruption risk in the defence ministry.

In order to improve the index, it is recommended that the government publish an annual defence budget that includes detailed information on expenditure across functions including research and design, training, salaries, acquisitions, disposal of assets, maintenance and personnel expenditures and appropriately lengthens the time that budget items can be discussed by the Parliament.

For the next step, the Defence Ministry should look into enhancing anti-corruption measure across operations. With formal regulations governing the actions of military personnel and with the Malaysian Anti-Corruption Commission (MACC), there is a great possibility to introduce its comprehensive anti-corruption framework in the defence ministry.

Currently, there is no comprehensive anti-corruption training besides from the ad-hoc integrity talks. Even though an Integrity Plan Manual exists, but it is insufficient preparation for commanders on deployment and there is evidence that corruption is a high risk issue for the Eastern Sabah Security Command (ESSC).

But significant vulnerabilities to corruption persist as a result of a weak legislative scrutiny, opaque budgets, weak whistle-blower protections, and insufficient anti-corruption training.

To sum up, corruption can pave the way to treachery and mistrust and eventually affect the efficiency of the defense and security agency of a nation.

(GI 2015) is an important tool to assess the existence, effectiveness and enforcement of institutional and informal controls to manage the risk of corruption in defence and security institutions.

Noticeably, all the invitees at his seminar and workshops are academics and graft busters. It lacked the presence of those with military credentials for a practical insight in the working of the military.

It is impractical for the military to operate and entertain TI's criticism of "weak legislative scrutiny, opaque budgets, weak whistle-blower protections, and insufficient anti-corruption training", if that is considered the solution.

The Australian have just announced an increase in defense spending. High on the shopping list is 12 Barracuda class submarines to be purchased from our submarine supplier, DCNS of France. It is custom designed by and built in Australia for the whopping price of A$50 billion (equivalent to RM13.3 billion each). [Read The Diplomat here].

For comparison, the Malaysian submarines are slightly less than RM1 billion each.

The only description disclosed to Australian tax-payers is that it is a nuclear submarine and environmental friendly but diesel electric powered like ours. The rest is not disclosed i.e. secret. Even if more details are revealed in the Australian Parliament, it will not be much.

No two items in a similar series military purchase are similar. The same class of submarine from DCNS purchased by Chile, Malaysia and India will not have the same configuration. How is the public to know?

Does that mean there is corruption?

Suggest Akhbar Satar learn up on the way the defense industry operate before making any remarks. No solution to prevent corruption will be acceptable without taking account confidentiality and limiting access to defense information. There is no compromise to any security breach.

To answer his complain of retired military personnel representing vendors, that is the practise around the world to limit dealing with security-cleared agents. He and the global Transprency International should understand how tight knit and complex military procurement process is before expressing their utopian views.

Part of the reason defense procurement is not made public is because it is not for the ill-informed public to scrutinise complex defense matter. Transparency and accountability does not improve integrity in defense procurement. It merely invite politically motivated discussion on the defense of the realm and be made into a circus as done by SUARAM and C4.

As Akhbar Satar had done before, his intention is clearly political. Better solution please.