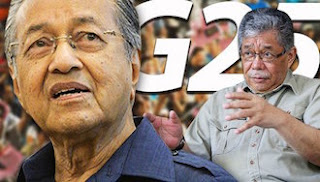 In the past few general elections, it will be preceded by religious instigation.

At one time, it was the kalimah Allah and Catholic publication, The Herald issues. Earlier, it was the conversion of Azlina @ Lina Joy Christianity.

There is also the interfaith issue with regard to the faith of children of usually Hindu couple, in which one of the spouse converted to Islam.

The amendment to Act 164 to resolve the issue of children faith was to be tabled in the last Parliament seating but postphoned.

Hindraf gathered influence among the Indians by inciting on religious sensitivity on Hindu-Islam disputes and demolition of illegal Hindu temples.

A recent viral video of a Hindraf gathering is rising temperature that a group of Malay Muslim NGOs have gathered to do a demonstration.

Perkasa can only be expected to be present in such hot issues. It raise the profile.

Hindraf will be in their elements as general election draws near.

This time around the amendment to Act 355 on syariah law as tabled by PAS President, Haji Hadi Awang is a hotly contested issue.

Tun Dr Mahathir said it is PAS's political manouvre. He may be right because DAP that agreed before to allow PAS with their Islamic agenda has now did a U turn.

Some how or rather, Mahathir is likely to be more involved in instigating religious sensitivity now. 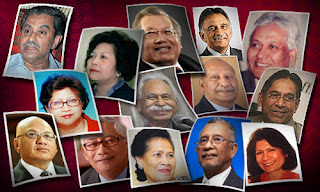 It is not because Perkasa is involved in the protest against the weakening influence Hindraf,

But the recent statement by G25 Sabah  raise such suspicion. The statement can be found in Malaysia Today here.

Sabah and Sarawak BN (including Sabah UMNO MPs) have stated they will not support RUU 355 in Parliament. The opposition will naturally oppose.

However the question should be asked as to why the need for G25 to do such a campaign in Sabah.

More so, the gist of their argument is that the Malaysian constitution is secular. It is rather repetitive argument and debate is endless that it has been more rhetorical than factual.

The fact is the Malaysia is neither a fully secular nor fully theological state. It is bit of both for the simple reason the Malaysian constitutional history traces back to the Malacca sultanate era which practises hudud.

Despite what our forefather had said, no secular constitution would have provisions for religion and compulsory state allocation for the Federal religion.

G25 has no basis to convert Sabah to oppose Act 355. That is unless there is a political intention.

And, it means lending a hand to Mahathir and Pakatan Harapan and/or to attack the BN seats in Sabah.

People are more likely to be willing to die for their religion than for their race or country. It is the best formula to incite hatred and emotion to hate the government. 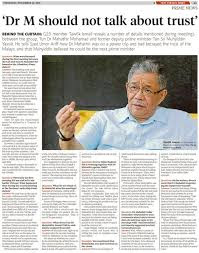 However, one may argue that G25 made it clear that they are apolitical. When Mahathir had a meeting with them, they rejected his request for support.

In fact, it ended with exchanges between Tawfik Tun Dr Ismail and Mahathir. Tawfik openly told Mahathir he has baggage and not the right person to criticise or topple Dato Najib.

In response, Mahathir said Tawfik and G25 cannot be trusted.

It could be all show and drama because several months later, G25 Sabah was formed.

It is heard G25 people from Kuala Lumpur came and toured the state for a month till the current Sabsh G25 members are put together.


They stayed at Hyatt Kota Kinabalu and being distinguish individuals they are, they do not rough it up in their travel.

Who could have paid for their stay and travelling?

Well, words on the grapevine is that a well known Mahathir financier paid for it.

It is not a surprise for Mahathir to do a clandestine collaboration. His views on Islam resembles Islam liberal, in which the main dispute is the authority of ulamak.

This view manifest itself in him hosting anti-hadith Kassim Ahmad forum at Yayasan Kepimpinan Perdana in Putrajaya.

Mahathir's daughter, Dato Marina is a part of G25 and a vociferous women's lib and Islam liberal activist. Mahathir supported Marina in her fight for the cross dressing case in Seremban.

G25 Sabah serve Mahathir's political purpose to break BN's stronghold in Sabah. Mahathir or his stooge, Parti Warisan Sabah's Dato Shafie Apdal has too many sin in Sabah to be credibly accepted.

The only option is to instigate religious sentiment by using NGOs like G25 to be their voice.

These sort of issues appeal to the professional, intellectuals, and upper strata of Sabah society. Their influence serve to swing votes against BN.

The open quarrel after Mahathir's meeting with G25 was meant to be a cover.

And the cover is blown when Tawfik's own nephew joined PPBM's protem commitee despite himself being a vocal critic of Mahathir.

It is not a surprise that it is another wayang Tamil of Mahathir.

G25,school of carps fed by mahathir since 1990's has been in the forefront to engagge head on with national prime issue with motives to saint the old man whenever.Does G25 represent the masses intelectually,Nope.They are old carps waiting turns for naturally die off.