Government has new leads on Jho Low: Real or Drama? 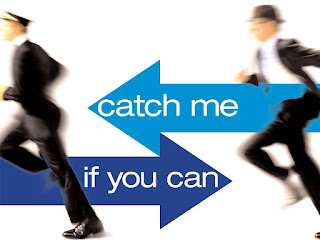 At the time public was still in a daze over Jho Low and 1MDB, contrary to the advise of a source close to former PM Dato Najib cautioninh against drawing a conclusion, this blog raised issue on Jho Loh back in early February 2015 with the posting, "Time for Jho Loh to start singing".

It was followed by an April 2015 posting, "Why still no Jho Loh lawsuit against NYT?"

Sources from Penang was saying Tan Sri Larry Low is not as rich as he potrayed himself to be. MWE is not entirely his show, but together with Thai partner. Larry's family moved from Thailand to Penang.

Talk was Jho Loh borrowed money from his father, fathers' friends, and even Ah Long to invest in gifts to win the hearts of potential clients. The Whale book revealed Jho Low modus operandi was buying his way into friendship and access.

The early tip-off on Jho Loh blamed Dato Najib, but 1MDB had many good intentions and CSR, thus it has to be given a chance. More benefit of the doubt as more information received from Terengganu.

An opportunity to meet CEO Dato Shahrol raised suspicion that there are character problem with those running 1MDB and blame should fairly be directed to Jho Low.

Najib's problem is his weakness in appointing and trusting people then stick to them like glue, but not for certain he planned to embezzle money i.e. criminal intention.

Does government want to bring back Jho Low? 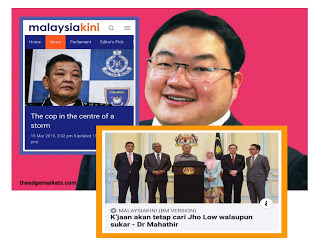 On March 13th, this blog make a committed posting to challenge and provoke government to extradite Jho Low back. The posting was entitled "M'sian govern't do not want Jho Loh, Nik Faishal to return?"

Subsequently, it is more persistent with "Will Hamid Bador get to bring back Jho Loh?" and "Parent's home seized, How is Jho Loh to return?" Apparently, there is new development or statement on Jho Loh.

On May 8th, Tun Daim disclosed he was contacted by Jho Loh who tried to assist in the ECRL negotiation with China.

He was giving the impression Jho Low tried to appease the government and cut a deal. If it is not true, it is intended to create the perception, Najib will face trouble and get jailed for 1MDB, Jho Low is going to snitch.

Is it for real or is it drama?

At the material time, Jho Loh's lawyers immediately denied he had contacted Daim. So was to the various Daim's claim in November last year that Jho Low was willing to cooperate and cut a deal for immunity.

Mahathir denied the ECRL deal had nothing to do with Jho Low or any extradition arrangement for Jho Low.

Without the so-called Jho Low's offer for help, the reduction was only RM10 billion. No one raised issue with the clam made by Sarawak Report that the ECRL project was padded by RM30 billion to pay for 1MDB. It was already the cheapest per kilometre cost of high speed rail.

In September last year, Daim claimed Jho Low trying to contact to shed light on the 1MDB issue. It was not only denied but then Deputy IGP, Tan Sri Norrashid saw no need to take statement from Daim.

SCMP reported then that Jho Low and family were in Hong Kong but then fled to Macau. The report claimed they were waiting for the GE14 result in Phuket, Thailand,

On Wednesday May 22nd, new IGP gave a new development on the Jho Low search:


New clues on Jho Low, including his whereabouts: IGP

"If you ask me whether police have new sign (clue) on him, yes we have and l am serious about this.

"We have known of his whereabouts for quite some time and we know that people are waiting to know about this case but we need to be patient.

"Despite having sufficient evidence against him, he continued issuing statements through his lawyers to degrade the Government regarding the 1Malaysia Development Bhd (1MDB) issue," he said.

"God wiling, he will be brought to justice soon," he said.

Low, whose whereabouts were unknown until now, has been an adviser to former prime minister Datuk Seri Najib Razak.

Low has been charged in Malaysia and in the United States with receiving more than US$1billion (RM4.2billion) from 1MDB in 2009 and 2011, and with money laundering.

Low has consistently denied any wrongdoing through spokesmen.

No place mentioned and the police seems to on a stakeout. Hamid Bador could only affirm his seriousness and seek patience.


IGP: We have new leads on Jho Low's whereabouts 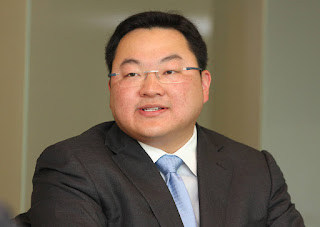 Abdul Hamid said on Wednesday (May 22) that the police would do their best to bring the fugitive businessman, who is linked to scandal-plagued 1Malaysia Development Bhd (1MDB), back home in the nearest future.

The newly minted IGP, however, declined to reveal details of these new leads obtained by his men.

“I am serious (about the new leads), but have patience.

Asked whether Jho Low was hiding in China, he merely replied: “I did not say that.”

Abdul Hamid said Jho Low's actions had caused the country to incur a lot of bad debts, adding that the businessman should be responsible for the mess.

Not mincing his words, the nation's top cop said Jho Low's move to hide behind his lawyers in Macau and Hong Kong when making statements was nothing short of a cowardly act.

“The country has high debts because of his robbery.

"When he is brought to court, Insya-Allah (God willing), all (his) scams and lies will be revealed,” he said. – Bernama/The Star

Patience in deed we will.

Catch me if you can 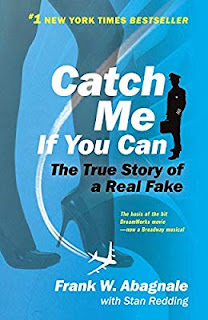 Reggie Jessie believe the government has info. The chronology of event is interesting to ponder.

8th of July 2018: Known: “Mahathir and Daim negotiated terms with Jho Low on Skype and know where he is” – RJ Rithaudeen.

20th of August 2018: Known: “He was in Macau the last time. I think the GoM knows where he is” – Daim Zainuddin (confirms what I said)

9th of January 2019: Unknown, but believed to be in China, according to Wall Street Journal.

12th of April 2019: Known: he definitely is in China, according to Sin Chew Daily.

19th of April 2019: Unknown, not even sure if he’s in China, according to Chinese Ambassador Bai Tian. 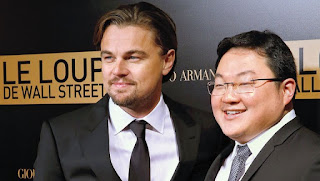 Rightfully, police cannot reveal their investigation as Jho Low will be alerted and back on the run again. It also meant to flush Jho Low out of hiding. Trust Hamid Bador is dedicated to prove he is on the right path.

But, politicians could make a drama out of anything.