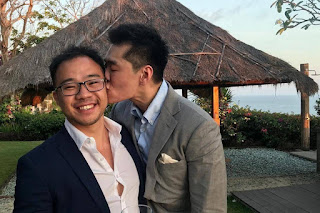 On his Instagram, he wrote: "Today I marry my soulmate. Looking forward to a lifetime of moments like this with [Huanwu]."

The father of the bridegroom (or bride, whichever the preference) and younger brother of Singapore Prime Minister, Lee Hsien Yang was asked by South China Morning Post for comment.

He said, "I believed my father would have been thrilled to know this."

Lee Kuan Yew's view on homosexuality was compiled by wikia.org. His answer was legal and scientific. It's a defensive mode to maintain his firm misdemeanour, but remain politically correct with the times.

Apparently, Singapore has a homosexual history with legal cases back in the early 1940s.

Gay activities were thriving in the 1980s till some form of curb in the 1990s. [Read up Wikipedia here.] Is it already acceptable practise and already out in the open?


In Taiwan, there was a 67% referendum against gay marriage but a court decision acknowledge the right for LGBT unions.

For Malaysia, it may not come as a shock to some Malaysians.

It is known that a large gay party was held in the early 2000s on the rooftop of YTL's Lot 10 and participants were coming from Singapore. A family member was an eye witness and handling the catering.

However, the conservatives will have to deal with the prospect of Malaysia will be having a gay Prime Minister.

Dato Seri Anwar Ibrahim may be pardon by Agong, but it does not mean he is not a ex-convict as PKR leaders wish to defend.

And, he was legally proven and concluded by a court to be gay. That fact remain undisputed and a waste of time to sue in any court of law in Malaysia.

Within the UMNO and PPBM circle, it is strongly believed that Tun Dr Mahathir will not allow Anwar Ibrahim to be Prime Minister. There have been many, but most prominent to openly express that view was UMNO's Acting President, Dato Mohammed Hassan at the Sandakan by-election.

Mahathir's reason may not be due to his sexual inclination or as he used to call him, immoral. His daughter is a pro-LGBT activists, while his granddaughter and stepchildren are out of the closet LGBT.

To the more discerning political observers, Mahathir's reluctance to have Anwar as PM is more out of fear Anwar will pursue him and his family in court for corruption, abuse of power and embezzlement of state coffer.


Noble as it is, to the devout Malaysian Muslims and Christians, there is the fear for the wrath of God on Malaysia as happened in the Quranic and Biblical stories on the people of Lot. for the open practise of LGBT in Sodom.

There are quite a number willing to stay with a dictator and true kleptocrat as Prime Minister than a sodomist.

The bigger LGBT wave is at the border. Conservative Singapore has succumbed with the symbolic gay marriage of the grandson of its conservative and disciplinarian founding father, Lee Kuan Yew. A matter of time, Singapore is finish. Already, they have allowed casinos.

It will it be a matter of time for Malaysia with Anwar Ibrahim as PM-in-waiting. That is unless something happen after Raya. Politically, it is a crucial moment for a Mahathir who is pushed to the wall but still holding on to power.

DAP has applied pressure and that is the reason Lim Kit Siang confidently dare Mat Hasan with the challenge he will quit politics if Anwar does not make PM and Mat Hassan to quit if Anwar make it.

It sound serious then but no more now, chickadee.