Penang tunnel made "Chickadee" enchained with sorrow to debate Najib


"Chickadee", tell me what's wrong
You're enchained by your own sorrow
In your eyes there is no hope for tomorrow
How I hate to see you like this
There is no way you can deny it
I can see that you're oh so sad, so quiet

"Chickadee", tell me the truth
I'm a shoulder you can cry on
Your best friend, I'm the one you must rely on
You were always sure of yourself
Now I see you've broken a feather
I hope we can patch it up together

Pun from lyric of Chiquitta by ABBA

We thought Lim Kit Siang backed out because Dato Najib would have used the debate to raised issue and exposed his embarassing past, personal and subversive activities, including his fake law degree degree and humbling begnning as a pork seller in Batu Pahat, Johor.

Raja Petra thought Najib would used it to raise issues Kit Siang raised against Tun Dr Mahathir in the past such BMF, BNM Forex, Maminco, Perwaja and the list goes on.

There is also the possibility Dato Najib would use the debate to question on the "kewayangan" (dramatic spin) of his son, Lim Guan Eng on the misleading economic and financial statements and information.

Yesterday, we were told to think further.

This morning we were told all those issues are already out in the open or too long to be relevant.

It hardly could scare or embarrass or worry a veteran politician like Kit Siang. He could do a Phee Boon Pah's "So what?" 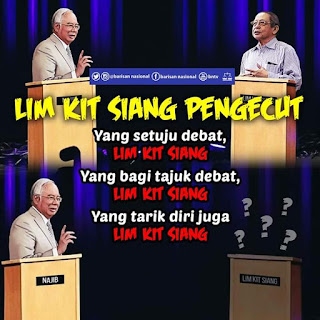 The only possibility for Kit Siang to pull out must be out of fear for an issue that is current, affect him and/or his son legally and embarrassing.

It was him, who requested for Kleptocrasy as the theme of the debate, but the table would be turned against him.

And, it woyld be an issue Kit Siang would have wanted to remain silent.

When this FB posting of Dato Najib was up, it did not occurred to us that he may have wanted to tell the public that first Lim family of DAP is afraid of reigniting the terowong issue again. 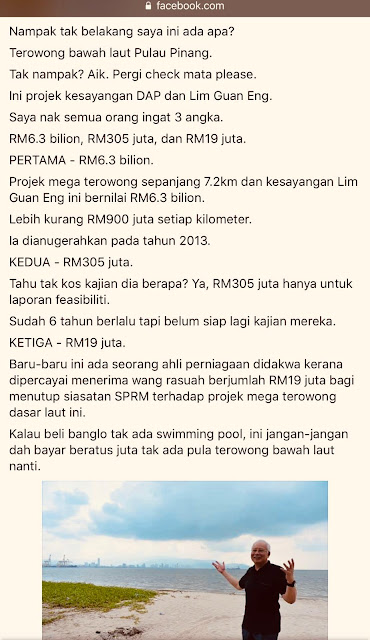 After pondering on the criteria, it just struck us that Kit Siang pulled out because he feared Najib would put the tunnel issue in the spotlight again.

He could abuse his position to influence Tommy Thomas and indirectly the enforcement agencies, but it would only reignite the terowong issue which Raja Petra did a 10 series expose of the investigation paper of MACC.

Eventually, Tommy and MACC may have to succumb to public pressure to pursue the tunnel controversy again.

Dato Gnarajah had to face 68 money laundering charges, but it did not end the discussion and finger pointing at Lim Guan Eng.

Raja Petra raised the names of DAP leaders receipient of the money from Dato Zarul's company but only Gnarajah face the brunt of the law.

It still puzzles us that a former Merchant banker like Zarul could trust a known conman in Gnarajah to allegedly bribe MACC.