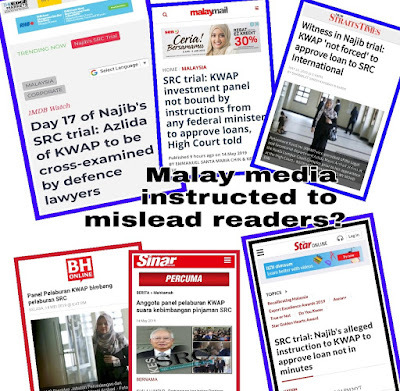 Last week or two saw a chorus of KWAP's witnesses gave testimonies that seemed scripted to pin on Najib.

It started with the wide media coverage to the testimony of the 29th witness, AVP Amirul Imran Ahmat, and confirmed by witnesses #33, Ambalagam Marapan and witness #34, Amirah Muhammad Nor.

However, Amirah was caught by defense lawyer giving testimony similarly worded as Ambalagam. She admitted MACC assisted with the choice of words or as quoted in Malay, "...SPRM telah bantu saya dengan ayatnya saja."

A lawyer cautioned in jest against accusing MACC tampering with the witness, but "assisting with words" was the way to put it when caught being coached.

Witness #35, KWAP's VP for legal and secretarial, Azlida Mazni Arshad chorused the same storyline. She told the court of being informed by KWAP Chairman of Najib's request to expedite the KWAP loans to SRC.

Her cross examination was awaited by media. Upon cross-examination, she negated the bevy of statements meant to proof Najib interfered in the process. She acknowledged KWAP is not bound by Najib's instruction.

The Malay Mail Online reported below with the highlighted Q&A in red:


KUALA LUMPUR, May 14 — The Retirement Fund Incorporated’s (KWAP) investment panel need not obey instructions from the prime minister or Cabinet members when approving loans within its purview, the High Court heard today.

She said this when Najib’s defence lawyer, Harvinderjit Singh, asked about the procedural steps that are taken before the panel approves a loan.

Harvinderjit: Do you agree the investment panel is not bound by instructions of the prime minister?

Azlida: Ideally, they are not bound.

Harvinderjit: Do you agree they are not bound to follow recommendations made in an Investment Paper submitted to them?

Harvinderjit: They (the panel) can choose to reject (the loan application) outright?

Last week, Azlida testified that KWAP received instructions from Najib in 2011 to hasten the loan approval for the first RM2 billion to be channelled SRC International.

Azlida explained to Harvinderjit that loans not backed up with sufficient documentation would usually be rejected by KWAP’s Fixed Income Department, the body that oversees investment portfolios undertaken by the pension fund.

Harvinderjit: If the Fixed Income Department feels they do not have enough information, let's say (they only have) 25 per cent of the needed documents, he (the officer in charge) could have recommended to his superior to reject the application?

Azlida: Ideally, that is the way.

This clarification was in response to the testimony made last week by the prosecution’s 29th witness, KWAP’s Fixed Income Department’s former vice president Amirul Imran Ahmat, who said that he had sought copious information from SRC International.

The information being sought, he had said, was in relation to the loans but only received an estimated 25 per cent of what he had requested.

Amirul Imran was the KWAP official that drafted the paper for the proposed RM2 billion loan, as a proposed investment for KWAP’s investment panel to consider.

Azlida during today’s proceedings also noted how it was the prerogative of Investment Panel to verify, defer, or request additional information from the loan applicants, by way of a meeting between the parties involved.

She also agreed with Harvinderjit that the investment panel could have requested for more information before approving the second RM2 billion loan to SRC International, and concurred with Najib’s lawyer that the panel had instead chosen to rely on the security of the government guarantee that was given with the first RM2 billion loan.

She had verified last week that former KWAP chief executive officer Datuk Azian Mohd Nor had told in the investment panel meeting on July 19, 2011, that the prime minister had informed KWAP’s chairman to expedite the approval process of the loan to SRC International.

In today’s proceedings, however, Azlida confirmed there was no written record from the minutes of the investment panel meeting back in 2011 that stated the loan was approved only because they were instructed to do so by Najib who prime minister at the time.

Harvinderjit then posed to Azlida that such an instruction to the panel would have been in the minutes if it were true, which she agreed.

She also agreed that the investment panel were not ‘forced’ to approve both RM2 billion loans to SRC International, in Aug 2011 and March 2012 respectively.

Today marks the 17th day of Najib's trial on seven charges of criminal of breach of trust (CBT), abuse of position, and money-laundering over RM42 million funds belonging to SRC International.

Wih this testimony, Azlida raised doubts for defense on the earlier testimonies of herself and other KWAP colleagues. It could weakened the prosecution's case and it is leaving it to chance to expect  prosecution to argue their case.

For a case determining moment, it is strange that Malay mainstream media ignored to highlight in their reporting, but repeat the same line of concern as other members of the KWAP chorus. It is as if the media mestro could only mislead the Malay majority by denying proper reporting.

Saving it for a latter day Kadir Jasin propaganda.

According to a reliable source, these statements in court by KWAP witnesses may be re-recorded statements taken after the fell of BN. It was not mentioned in the investigations done earlier.

These witnesses are still under employment at KWAP and one could expect them to be under pressure to keep their jobs.

However, a source with access to a KWAP official higher than these witnesses said one top KWAP official see no abuse of power or exerting of influence on Najib part. There were due process done.

Defense would stress this point by highlighting a testimony by an EPU officer which rejected the  approval by Najib with a suggestion for a different purpose of the loan to SRC. Does that drive the point with the judge?

For the time being, chances seemed low for Najib to go to jail soon on this low hanging fruit case. Tun Dr Mahathir's political plan as claimed by Outsyed will need to be further delayed. Political instability looks likely to persist for a while.

The better chance to jail Najib is the SRC case that happened and documents available locally. Perhaps, Mahathir may have a better chance with the other lower probability cases. The 1MDB trial which require foreign evidences and witnesses is due to start on August 19th.

This case and the one against Najib and Arul Kanda has revenge and political expediency written all over.

Thus far, the non-legal view see there are sufficient doubt on the evidences presented by prosecution on the SRC case.

It may need the judge to make a decision purely on the cheques Najib had issued, and ignore the facts raised during cross examination and if there is prima facie, evidences to be presented by defense to put Najib away on this.

It would then not be a New Malaysia with a rule of law, but reverting to a distant Malaysia which could rule the law, fabricate excuses to fire Chief Justice, and unconstitutionally change Malay rulers' rights.
at 5/15/2019 02:16:00 AM

Communication between KWAP and SRC is through Ahmad Norhisham Hassan (Arwah) and Nik Faisal (MIA). Papers for SRC stand on Malaysia Government guarantee. If I got this guarantee why should I ask for more.