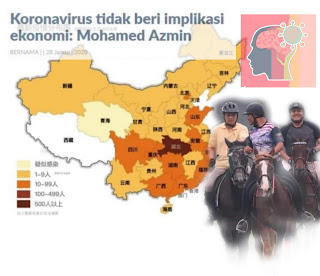 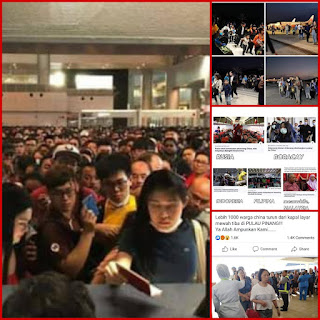 He requested tourism attractions to not deny tourist to visit. Earlier he said Malaysia should not discriminate against China tourist.

In the midst of this dangerous outbreak, the government seemed more concern on achieving the 30 million targeted tourist arrivals for VMY2020 than the safety of its citizens.

This sort of mindless statement do more damage to the industry. Similar in situation with Nero fiddled while Rome burned. 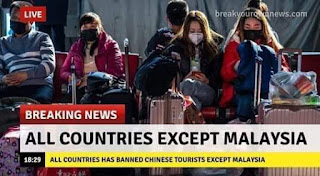 Mahathir took the problem lightly with the excuse there is no place to quarantine 2 million China tourists.

By downplaying the global health concern, 2019-nCov Novel CoronaVirus on the new strain of CoronaVirus, he seemed unaware that all Asian countries blocked off or sent back visitors from China. 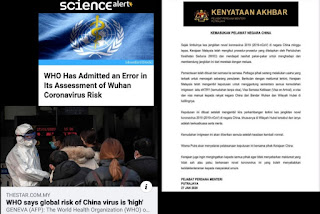 Malaysia relied totally on WHO report and only reacted upon knowledge they erred in their earlier report.

Even so, government only blocked visitors from Wuhan and the province of Hubei, but not for all China tourists. The ban was only done after China stopped its people from travelling out. 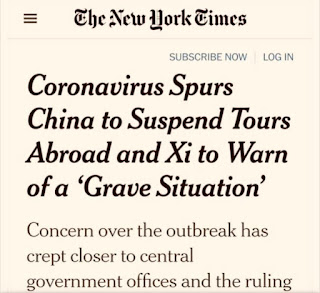 Countries as far away as US and Europe had their companies temporarily shutdown operations and rescue mission sent to bring out its citizen.

Malaysia has not done so on its citizen and a student that called for help on social media. 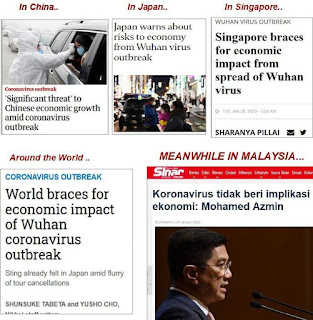 The financial media and journals are clamoring to report on the economic impact of the CoronaVirus. Yet Azmin could take a cautious stance and even Sinar Harian headlined it as no impact on the economy.

EdgeDaily today reported the rising death toll has unnerved markets as to its economic implication. Due to the present size of the China economy, the outbreak could potentially trigger a global recession. 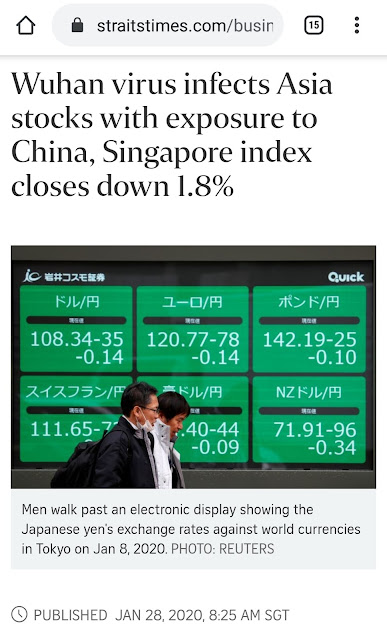 Stock market across the region yesterday tumbled and Kuala Lumpur itself dropped 21 points. CPO down by RM200 per tonne. China shutdown market to prevent a sell-off yesterday.

How could Azmin be so obtused to make such claims just to appease the public? 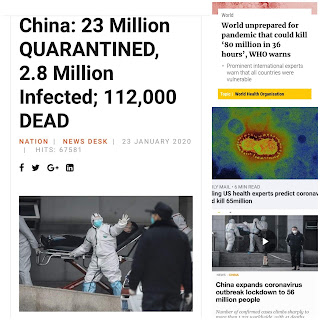 Experts are of the view that the Wuhan CoronaVirus could have potential global economic impact.

Azmin should stop being horsed in or now horsing around.

This is not the days a product of secondary school St Micheal Institution, Alor Setar, could dominate over the national psyche and public opinion through complete control of information flow and abundant manipulating of news report.

A crisis is not a time to be funny. It was obvious at yesterday's PC that Dr Dzulkifli Ahmad was smiling at Mohammaddin.

Even shameless Lim Guan Eng blasted him for talking of money at a time lives is at stake. 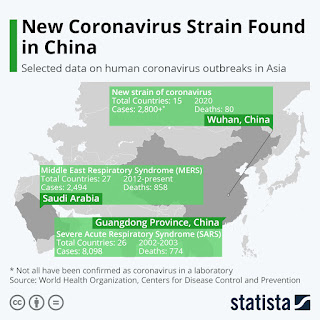 The CoronaVirus had evolved into a full outbreak within practically days. The first reported incident was on December 6th and Wuhan authority issued an urgent notice on December 30th. 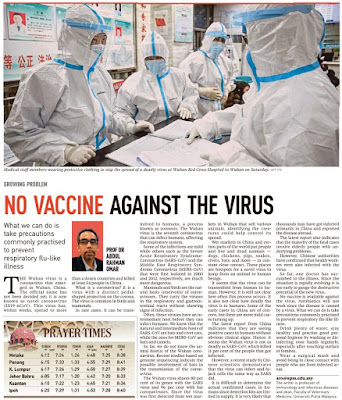 According to Statistica.com, the new strain of virus is not fully ascertain yet.

However, the two earlier outbreaks from two strains of Coronavirus in Saudi Arabia and China were deadly.

The current strain has a deadly impact on the brain of its victim.

It could spread through coughing and sneezing before the person is ascertained as inflicted with the virus. 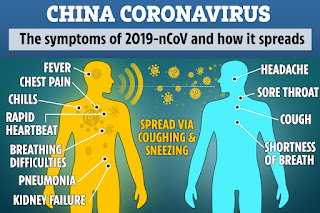 And, International Business Times reported below:


Scientists in the China, Hong Kong and the United States are racing to develop a vaccine against the raging Novel coronavirus (2019-nCov) outbreak ravaging mainland China. This fast-spreading disease on Wednesday (China time) exceeded the 2002-2003 SARS epidemic in the total number of confirmed cases in mainland China.

This horrific milestone testifies to the unnerving speed -- mostly through person-to-person contact -- at which 2019-nCoV is spreading on the mainland. The first case of this new virus (also called the Wuhan coronavirus) was reported only on Dec. 1, 2019. Others say the date is December 8.

The official casualty count as of 11:30 a.m. Hong Kong time Wednesday came to 6,061 cases and 132 deaths (all inside China). In contrast, the SARS outbreak from November 2002 to July 2003 infected 5,327 people in mainland China and killed 349 others, according to World Health Organization (WHO) data. The new 2019-nCoV outbreak achieved this grisly toll in only nine weeks compared to the nine months it took for SARS to attain the same result.

More on the research in NY Times HERE. 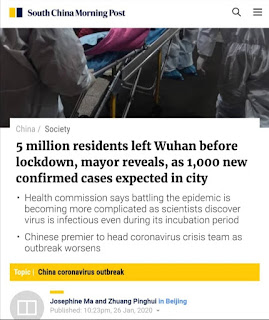 Last night, PPBM social media troopers was still at it to downplay the epidemic in their defense of their stubborn leader to ignore 5 million Wuhan residents was reported to have left the city before the lockdown

They were asking has there been any reported death in Malaysia as there should be casualties before action be done. 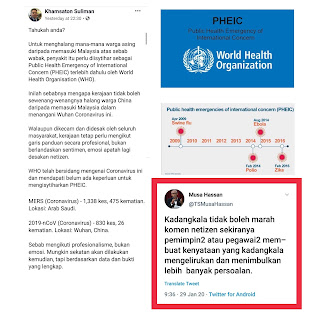 The government even resorted to threaten social media commentators viraling what is generally media reports from bonafide and reputable media companies.

The previous government has, but not PH government. It does not have the leadership with swift decision making ability needed to handle crisis.

Despite there were those that served the BN government, the essential communication was amissed. In fact, PMO statement was defensively justifying their actions to take refuge with WHO.

The Prime Minsiter and cabinet members seemed to either not getting proper advise or their recalcitrant attitude is turning off civil servants from giving the full picture of the situation.

Whenever anything goes wrong, PH Ministers victimised senior civil servants and accused them of undertaking deepstate operations against them.

Word is Mahathir was only made known and impress on to stop visitors from China upon advise from DPM Datin Seri Dr Wan Azizah.

She did it at the behest of Dato Seri Anwar Ibrahim to not ignore public concern. 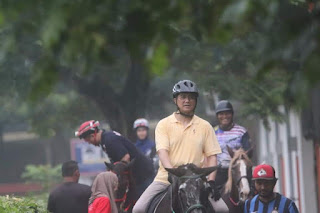 As for Azmin, he seemed ignorant and unable to gauge the economic impact. One FaceBooker claimed the true Azmin is unveiling himself.

He may have studied Economics up to graduate level but he had all along been more a politician than one with any vocation.

At the University of Minnesota, Azmin was the President of the Malaysian Student Association and he used it as platform to rub shoulder with politcians visiting Newe York and Washington. 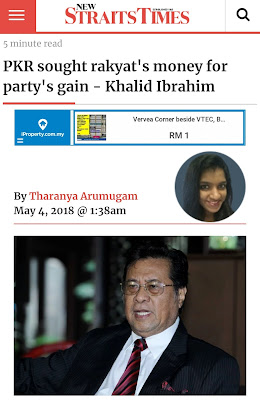 His contribution as Menteri Besar of Selangor was to spend off the reserve built by his predecessor, Tan Sri Khalid Ibrahim to popularise himself, politically.

As Economics Minister, he only copycat the Shared Prosperity plan from a United Nation Development Program. 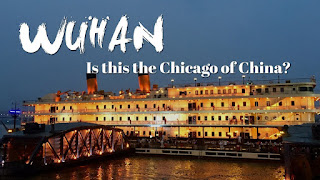 Azmin totally missed the economic significance of Wuhan. Taken from the Facebooker:


Wuhan is the Chicago of China. It is one of the manufacturing hub of China. The US company Foxcom has a base (near Wuhan in the place worst hit, Chongqing). 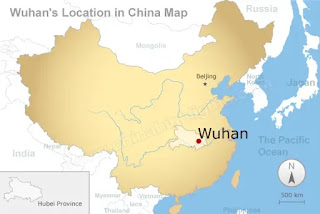 Its central location makes it the transportation hub of China. It is at the confluence of Yangtze Kiang river and largest tributary, Han River. It is strategically located for China's maritime defense industry.

The three gorge dam is near Wuhan.

It is populated by the majority ethnic of China, the Han, which is one of the early dynasties of China. It was briefly the capital for China during Kuomintang rule. 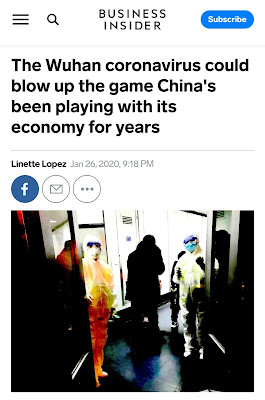 On the maritime industry, the China Shipbuilding Industry Corporation (CSIC), is one of the two largest shipbuilding conglomorates in China.

The inland and access to river transport made its Wuhan facilities strategically located to serve the defense industry.

The US is known to conduct and develop biological warfare. Coincidently, there was a pandemic simulation conducted by John Hpkins University three months ago.

It is perhaps mere conspiracy theory, but the hit at Wuhan is strategic and impactful that Business Insider column view that the lockdown could blow-up the Chinese economy.

While Mahathir is more concerned with the dwindling economy and focused only the money the Chinese visitors may bring in, Azmin is more realistic, knowing whatever consequences the CoronaVirus can cause, the country's economic situation is already in dire and hopeless stage and nothing can change it. So he is taking it easy and relaxed like a moron.

I think you have been Conned by the Racist Arab malay Supremacist Agenda Games that Azmin and Tun mamkthir is playing..... IF Chinese Brings more Corona Virus...the Malay Supremacist can Blame the Chinese for everything...including reject UEC, Force to Learn Khat-Jawi, bow to Malay Supremacist agenda...and Solidify the Malay Supremacist Agenda to Condemn Malaysia to Pariah State....These Scumbags do not care for rest of malaysia because they have Access to BEST Emergency Evacuation for Family and to hospital....those Malaysian who dies are just colleteral damage like May 13, Memali, Kg Medan....pastor Koh, Ruth, helmi, Amri... orang asli who reject Islam...etc...

They could have choosen to say some impact but we will continue to monitor.....

We will monitor all tourist arrival....

We will start preparing hospital for Quarantine procedure....but a 4th World Malaysia mentality will talk the way these corrupted minister talk.....MalaySial is Damn anyway because of Maruah Arab Melayu Islam agenda!!

When your government wants money more than the safety of their citizens, thats a very sad thing to see, and it is not exclusive to malaysia, it happens everywhere.