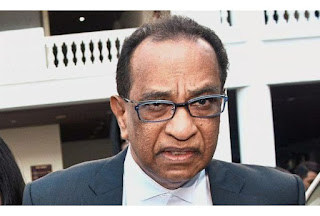 Question will be raised as to why MACC was not thorough enough to double checked first?

Or is there truth that then MACC Chief Commissioner, Tan Sri Abu Kassim was deadset to charge Najib before investigations were completed and statements obtained by those suspects including Najib and Nik Faisal?

Lets save for that for later posting to elaborate further on the recent MACC's Watergate Scandal. IGP said they will begin to identify the voices but Latheefa Koya mentioned all the identity of the voices.

Is it really tapes someone gave her or MACC's on spying tapes?

Sitham's argument on Monday as per extract from The Star report below:


Ad-hoc prosecutor Datuk V. Sithambaram said that the act of the applicant (Najib) in waiting until this late stage of the trial to seek verification from a document examiner clearly showed that the application was an afterthought and a tactical manoeuvre to delay proceedings and put the prosecution at a procedural disadvantage to face the defence's case.

"If allowed, this application will cause a miscarriage of justice. Justice is not only for the defence, it is also for the prosecution, an often overlooked proposition.

"In fact, during cross-examination on 7 January, 2020, the accused himself admitted that he had extensive discussions with his counsels on the need to engage a document examiner before the commencement of trial.

The prosecutor added that the accused's desperate attempt to bolster the application by vehemently requiring his signatures to be examined by an expert before the applicant will acknowledge any of his signatures only served to confirm their contention that it is an afterthought and full of mala fide.

"We urge this Honourable Court not to condone such an act by the applicant. My lord, the prosecution's case is based on direct evidence, as the accused stated that the documents were signed by himself, the accused never raised the matter to the Malaysian Anti-Corruption Commission (MACC) investigating officer that they were forgeries. The accused even did not lodge any police report over the matter," said Sithambaram.

All those fancy words from Tun Dr Mahathir's former lawyer for the VK Lingam tape RCI.

However, the conclusion he speculated, perceived and derived from the actions could be easily dispelled as the documents has never been authenticated by the investigators.

Harvey pointed it out.

What miscarriage of justice bull is he talking about. If prosecution has rights, then defense has rights for truth. Why then is prosecution obstructing the truth from coming out?

It was the same day Tan Sri Shafee Abdullah told the court he is applying to the court to seek authentication of the signature in the documents.

Najib told the court of his surprise. During questioning by MACC, there were too many documents lumped together for verification and he may have not thought on its authencity when he saw his signatures.

Upon close scrutiy, he realised something fishy.

During prosecution, Shafee had orally opposed the documents submitted as evidence.

It was resisted by Sitham and asked that defense should file for a formal written application. The application was made on December 16th 2019.

No after thought at all.

Shafee was reported to mention of those questionable signatures on December 9th 2019. Court decided there was prima facie on the SRC case in November.

Its fair for defense to do so. 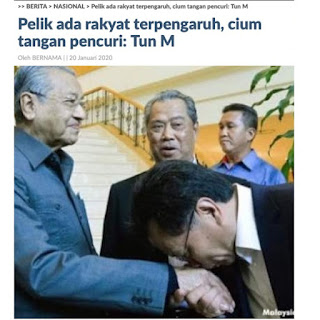 Wonder was this the reason Mahathir was grumbling yesterday as to why people are still kissing Najib's hands despite him being a thief. 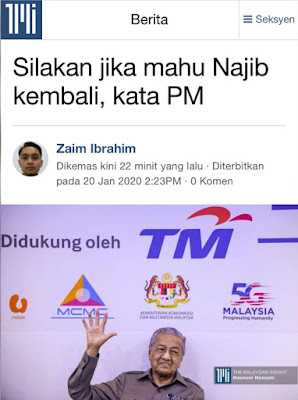 At least he stopped calling him as swindler, robber, thug and stealing corpses from grave. 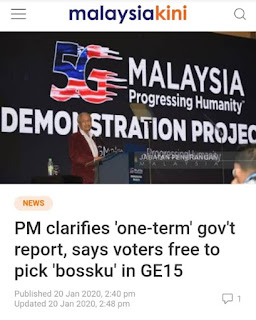 More interesting as to why he needed to mention it is up to the people if they still want Najib back. 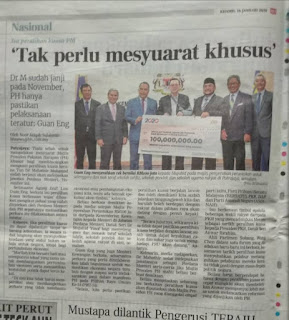 Tic toc tic toc ... the clock is ticking as AMK and Otai Reformasi are getting more aggresive despite Lim Guan Eng willingness for Mahathir to stay till APEC 2020.

Its not making Anwar so despite talks of several sodomy videos circulating. Its only expected that the Yusof Rawther SD will not amount to anything as police's priority seemed to be to cover-up for the more obvious Azmin video.

They can cover-up but it can be re-open when PH lose government.

Even if the much talk that Dato Hishamuddin will be appointed Deputy PM, can he resist public pressure for justice and truth?
at 1/22/2020 02:35:00 PM