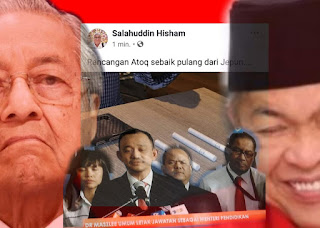 
The previous posting mentioned of the plan to subdue DAP.

An Ops Lalang or deepstate operations is possibly the plan. However, the legal development on LTTE charges under SOSMA, and Communist Party of Malaya revival does not exude confidence for such plan to work.

Not with Attorney General, Tan Sri Tommy Thomas still around. There are indications that Tommy will neither get a renewal nor Siti Kassim will get to be AG come March. Mahathir changed the Chief Secretary and Millitary Chief.

He is not waiting for Dewan Rakyat Speaker to get his Parliamentary reform plan to empower Parliament in the appointment of important government appointments.

Mahathir has a better plan that would shake DAP. It could be a one, two hit that DAP did not expect.

This does not include the possibility Anwar only realised his plan to play it cool and confident is not working and could be staring at a 10-year possibility.

No, it is not the Yusof Rawther SD but could be other cases surfacing. Raja Petra hinted there could be five more videos. Maybe it is something related to sodomy but will not be a repeat of past storyline.

And, maybe it is related to an SD and complaint to be filed. 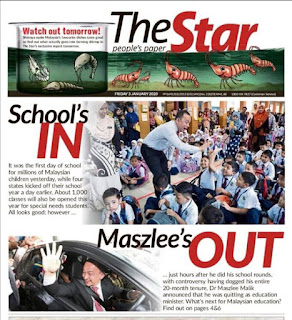 It was an issue from policy introduced by Dr Maszlee Malek. 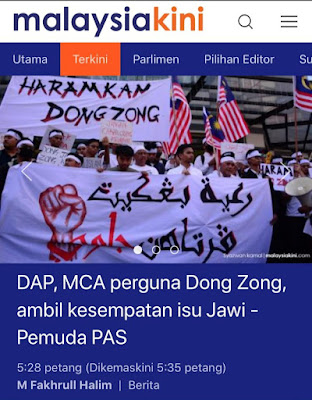 The latest commotion by Dong Zong was instigated by MCA Selangor. They see Chinese voters pushing off DAP but needed something to pull their way.

DAP had to take the Dong Zong line. When court order to stop was issued, ruling party DAP criticised police and that stunted MCA. 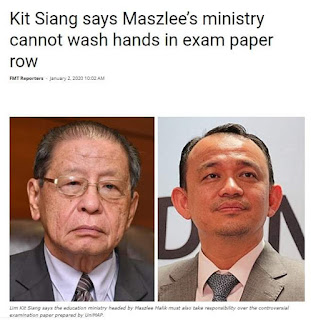 That episode may have cost Maszlee his Ministership.

Despite firing up the Jawi and Dong Zong issues, Mahathir requested his resignation and done so on the most embarassing time - the first day school reopen.

Maszlee statement to return the position to Mahathir is certainly something to ponder as it could mean he is a sacrificial lamb for a power transition play.

Who will be replacing Maszlee? 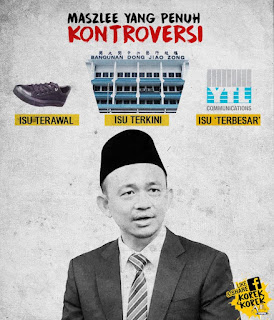 There is a long list of reasons for the removal of Maszlee.

He has no political clout thus is dispensible. Perception of him is the lowest and surveys placed him as the most unpopular Minister despite claims he contributed immensely to educational reform.

DAP have not been financially supportive of him including possibly deny funding for free breakfast program. The Jawi issue see the need to see him out.

The opposition-Malay side wants him out as he is seen as defensive of ultra kiasu, compromising Malay interest, PAN and IKRAM affiliation, and shooting his mouth at will without pondering the ramification that even the gods are annoyed. Najib did what the Malay proverb described as "pulangkan paku buah keras".

Maszlee admitted among the reasons that led him to resign are the Jawi issue and cancelled free breakfast plan for schools. 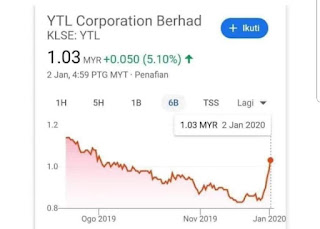 However, the school internet issue that Maszlee touched is the likely reason.

Maszlee terminated the Bestari.net project of Mahathir's most favoured tycoon, YTL and Tan Sri Muhyuddin had long been said to have interest in Bestari.net through his son-in-law. 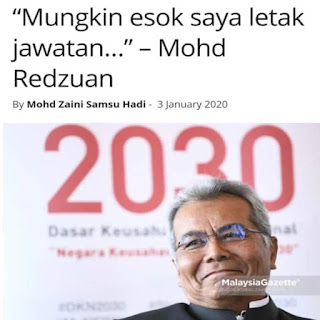 The cabinet reshuffle one of Mahathir's four thrust of actions to be taken upon his return from Okinawa holiday.

Maszlee is only a puff as he plan to reinforce cabinet to bring the likes of Dato Mustapha Mohamed, Dato Hamzah Zainuddin and others. 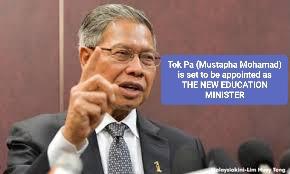 There is even the long shot possibility of bringing in Dato Hishamuddin Hussein Onn. There have been talk for the last few months that he will be returning back into cabinet.

Since he denied leaving UMNO and the complain against him to the Disciplinary Council, it does not look possible.


However, Anwar has jokingly congratulated him as future Deputy Prime Minister. 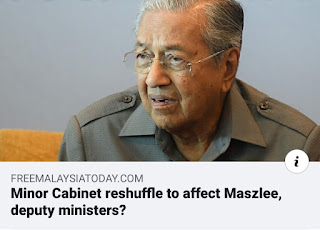 Mahathir played down the resignation as merely a minor cabinet reshuffle of only a Minister and a Deputy Minister.

Why only one Minister when Ilham Tower mentioned Ministers in plural in his past criticism?

Who would the Deputies be? DAP's Deputy MOE? Lim Guan Eng have made DAP Deputy Ministers more powerful tgan Ministers.

The test to show Mahathir could still flex his muscle lies on whether he could act tough to strengthen his hold on power. 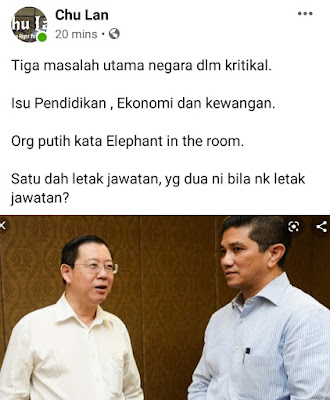 And he should sack the incompetent Lim Guan Eng and retrial his tunnel case. It is legally feasible to do so despite court's acquital.

Sack Azmin? Nah... even covering him up for sodomy. 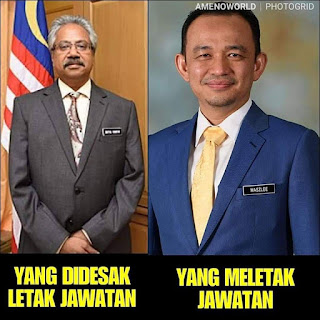 The loudest call to be sacked is Waythamoorthy but Maszlee, the one Mahathir is said to be protective off, resigned. DAP pressure?

If Mahathir could not convince he could sacked DAP, then what is to be expected of his other plans? 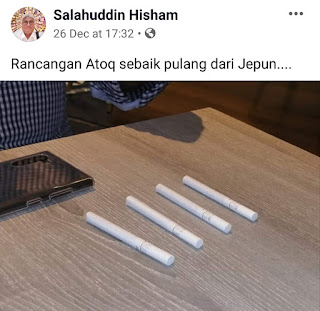 Much talked about on the political grapevine lately is Zahid supporting Mahathir's plan.

There have been words circulating that Zahid mentioned in his Kimanis rally to change the government this years.

It differs from his earlier statements of no backdoor government and UMNO will wait for the next general election. However, there is no media report of it. 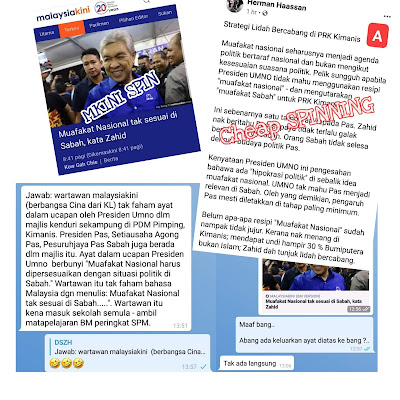 The only report of his Kimanis rally is Malaysiakini's spinned title Muafakat Nasional is not relevent in Sabah. Zahid actually said MN need to adjust to the Sabah political condition.

Nevertheless the four-cigarette source claimed Mahathir will create a new coalition without DAP comprising of PPBM, Muafakat Nasional of UMNO and PAS, BN, Sabah and Sarawak and some from PKR.

Consequently, it will be followed by clean-up of cabinet to remove those of age above 70 (to mean the likes of Muhyiddin is out).

Mahathir knows his popularity sunk to the ocean floor and the new leadership must be mostly those in their 40s and 50s (to mean making room for Azmin and Mukhriz ascent). 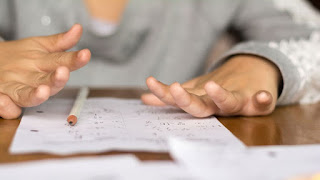 This bring us back to the old seat count calculation of Mahathir.

His operators claim Mahathir has more than 125 seats of PPBM, PAS, UMNO, some from PKR, 4 from PAN, Warisan, GBS, GPS, mystery DAP MPs, and 10 independents.

Play around with the permutations to see if it makes sense. 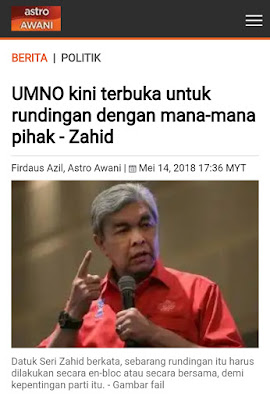 Was it not Mahathir who insist to not to want 8 MPs from UMNO? If not enbloc, his plan make not work.

Does Mahathir really think the likes of Mat Sabu, Salahudddin Ayub, Hanipa Mydin and Mahfudz Omar will stop their allegiance to DAP and DAP's preferred choice of Anwar?


Is Mahathir sure Warisan is with him and the claimed alliance with Anwar is merely hedging? Is Mahathir's distrust with Dato Shafie Apdal that made PPBM enter Sabah? 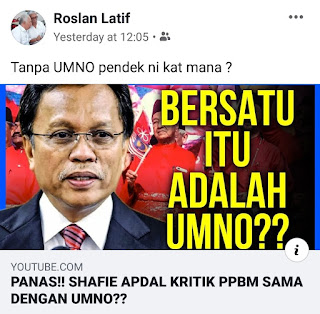 What is this talk that some PPBM Sabah leaders are lending support to BN candidate at Kimanis - unsettled score with Shafie or presuring for position in state government? 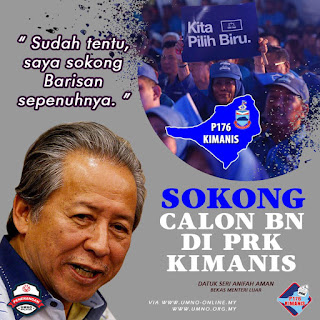 Will GBS and all independents support Mahathir with Anifah, Jeffrey Kitingan and GBS is heard campaigning for BN?

As far as GPS, is Pehin Taib Mahmud mentally still steady and stable to pull it for Mahathir?

GPS may not want to be caught in a crossfire between PPBM and UMNO or any other political crossfires of Malaya. They could possibly end up not voting should there be a vote of no confidence.

Is it believable for DAP MPs to betray the party though few are believed to be up in arms with the paranoia and power dominance of the Lims? 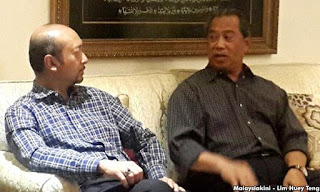 Will Muhyiddin stay loyal with Mahathir with Anwar's offer for DPM is already on the table?

Lastly, is it believable for Mahathir to finally dump Azmin, who was also in Japan over the holidays, and Dato Mukhriz to be his successor?

Nah ...not believable yet. The country need a leader and not one constantly need to be be led the way and require handholding.

The stealth and simple game of Zahid still seemed to have outsmarted Mahathir. Take the UMNO MPs all or none, taking parts will not work.
at 1/03/2020 06:04:00 PM

Tun M would never allow anyone to be right in their predictions of his move. He resents anyone pre-empting his moves particularly with the right predictions. He will change directions and will relish at the thought of control with the element of surprise. You want to be right? Fat chance.