Azmin in political desperation and should say adios 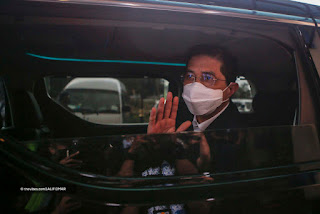 Azmin's portal MalaysiaNow was recently called genetic defect by blogger Life of Annie for their repeated attempt to pick on Dato Vinod Sekhar. It seemed to be his pursuit to end the career of Dato Seri Anwar Ibrahim by crippling his adviser.

However, MalaysiaNow seemed to lack the aptitude to use business and corporate issue to leave any dent. They now run the risk of being sued by Tan Sri Tony Fernandez for getting their facts all wrong.

Its more elaborate but to keep it sweet and simple, Government provided him guarantee but not loan.

Not only MalaysiaNow screwed up, another of Azmin's propagandist, Chegu Bard failed miserably in the role he is supposed to play.

His attempt to pick on Dato Seri Zahid Hamidi and Tan Sri Lee Kim Yew on the RFID issue ended embarassingly with him apologising and pulling out his FB article.

The screw up of his media and propaganda arm is an indication Azmin is in political trouble water. They should have focussed to help out Azmin's politics than dabble in an area they do not know enough. 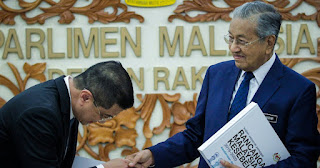 Both outfits are attempt by Azmin to score political brownie points and remain relevant with PPBM. At one time, he was touted by certain quarter of UMNO as having the strong backing of Chinese taiko of Selangor.

Though it does not tally with this blogger's feedback with more established hongs of the Chinese community, Azmin was then being seen as a larger than life politician after the Sheraton Move.

He betrayed PKR and Tun Mahathir to turn ally to PAS and certain UMNO quarters. Then, they  hijack PPBM out of Pakatan Harapan. It is supposed a question of only when before Azmin get appointed to be Deputy Prime Minister.

Then, few UMNO MPs withdrew support from Tan Sri Muhyiddin. To avert a catastrophic change, Muhyiddin had to change direction to appoint Dato Seri Ismail Sabri and subsequently secede the PMship position to him.

Azmin exerted his demand for DPM post and he has Muhyiddin support. 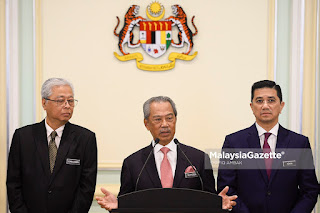 At one time, Ismail was almost forced to secede. He had closed the front door but Azmin still had access through the backdoor.

At the back of his mind, Ismail knew the public could not forget the incident Azmin displayed his self serving politics during the height of Covid infection.

With Muhyiddin now in a position Australia-based Malaysian blogger, Hussein Hamid described as "TSMY: Despised, Loathed & All Alone", Ismail does not need to entertain Azmin's request. 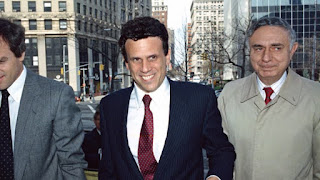 The recent hint that all is not well was when Azmin had to lie to create a false impression of himself.

Bernama quoted Milken Institute to claim "Malaysia tops emerging Southeast Asia for foreign investment in 2022". The economic ground does not point in that direction.

It is Indonesia that have been devouring FDI in the regions. Latheefa Koya's boo boo saw UAE invested few hundred billion US dollar there and jelo for Malaysia.

Miliken Institute gave the narrative Azmin wanted when faced with repeated critics that he failed in his job as MITI Minister.

The self serving leader with Tengku Zafrul went to the point of insisting factories allowed their foreign workers to operate but Malaysians cooped in their homes at the height of infection during the pandemic under Muhyiddin.

The name Milken reminded one of Micheal Milken, head of the Junk Bond department that led to the demise of Drexel Burnham Lambert.

True enough it is. Milken Institute is his economic think tank. Did Azmin paid the ex-convict to get such a glowing statement? 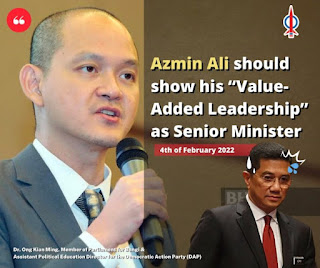 Finally, he agreed to this blogger's long contention that Azmin is no Minister material and yet he was still nice enough to merely say Azmin offers no added value as Senior Minister.

Pro-Mahathir Bebas News published a letter to claim Azmin was stealing the credit out of the effort of others and public resentment towards him is overwhelming. Though the credit claim is questionable, there is truth to the survey Azmin is the most loathed politician in Malaysia.

Mahathir's had once predicted Azmin could one day rise to be PM. One could suspect that it was not a praise but meant to provoke public anger. Mahathir could stab anyone's back politically, but will never be kind to anyone stabbing him.

It was Mahathir, who raised Azmin beyond his competency to the senior position as Economics Minister. It was a role as Minister in charge for EPU and a bit more responsibility.

However, his incompetency was apparent in his first speech to government servants in his personal capacity as Minister in charge. The first impression given of his speech back then was, "He was just another PTD officer." 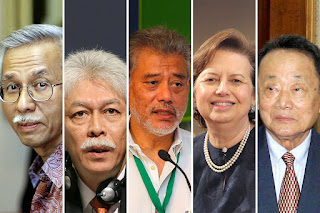 Though Azmin graduated with an Economic degree, his Master's degree was in Education. He had a brief stint as teacher at MRSM Terendak, before joining Mahathir's office. Azmin was then transferred to Anwar's office and joined the cloak and dagger world of politics.

Azmin is not a politician with ideas but a political opportunist cunning enough to be in the right place at the right time to rise up the position by removing his competitor.

It was apparent in the manner he positioned himself to seize the position to be MB of Selangor and knocked PAS-preferred Tan Sri Khalid Ibrahim aside.

He reinforced his position and popularity by spending the state money accumulated by Khalid. When he was taken to Federal, his luck ran out. 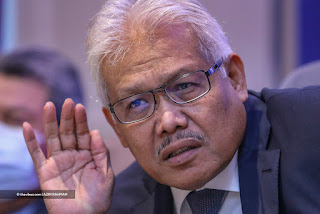 Ismail is not keen to take Azmin as DPM. And his position is backed by Dato Seri Hamzah Zainuddin. The Vibe has a take on Azmin's predicament. Extract below:

Since joining Bersatu, Azmin has been trying to consolidate his position within the Umno splinter party by aiming for top positions in the party and cabinet.

“It is an open secret among the party’s circles that he has been eyeing the deputy president post and is set to take on Youth and Sports Minister Datuk Seri Ahmad Faizal Azumu when the party polls are called.

“During the protracted negotiations for the cabinet posts following Muhyiddin’s resignation, he was jostling for the DPM post against Home Minister Datuk Seri Hamzah Zainudin.

“These schemes and moves have left Bersatu leaders with an uneasy and testy relationship with Azmin,” the source said. 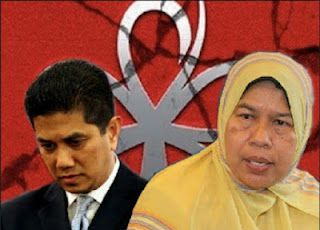 Additionally, the relationships between Azmin and some of the former PKR MPs who defected with him during the 2020 Sheraton Move have deteriorated as a result, notably with long-time ally and comrade Ampang MP Datuk Zuraida Kamaruddin.
According to another source within Bersatu circles, the move to implicate the Ampang MP for her alleged involvement with the newly formed Parti Bangsa Malaysia (PBM) was initiated by Azmin during a Bersatu supreme council meeting. 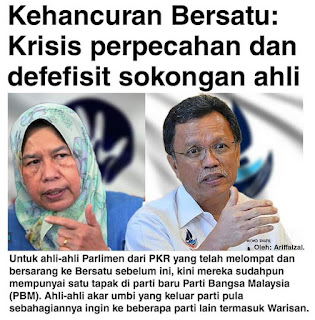 The long-time allies, the source said, have recently turned against each other due to differences over their political direction and future.

“This is why there have been moves to oust Zuraida from Bersatu. Some of the ex-PKR MPs such as Indera Mahkota MP Datuk Saifuddin Abdullah are determined to brave it out with Bersatu for GE15, while others are having second thoughts and are laying low,” the source said, without naming the other MPs. 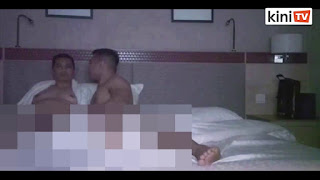 The source also confirmed earlier speculations that Azmin is now trying to make inroads into the recently launched PBM.

“This is especially so due to certain sexual allegations,” added the source.
In January 2020, then attorney-general Tan Sri Tommy Thomas had said no charges would be filed against those involved in a sex video purportedly linked to Azmin due to the inability to identify those involved.
The decision, however, was questioned by many quarters who believed that the individuals involved could easily be identified.
However, in view of the source’s revelation of the pressures facing Azmin, questions remain over whether the three-term MP and assemblyman would be able to survive the general elect unscathed.

For a twist to the Vibe story, Zuraidah apparently met representatives from PWTC and been talking of either joining UMNO or PBM join BN. 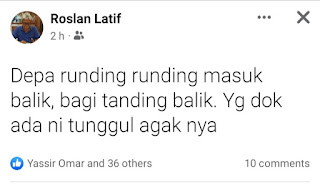 There is already murmur within UMNO resisting to those dubbed as betrayals joining UMNO and negotiating for seats for GE15.
It is not likely to be from Azmin's faction or frogged out UMNO MPs to PPBM returning. 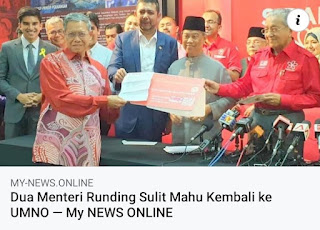 In addition, there is loud talk speculating MPs, including Ministers doing so. One name bandied about is Dato Mustapha Mohamed.
There is supposed to be another. 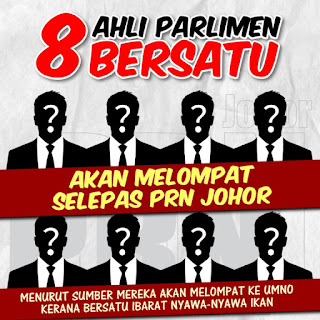 But the possible names have expanded and it is possibly about 8. And, it could be pre-Johor state election psy-war to breakdown the morale of PPBM.
Nevertheless, sometime last year, there was talk Azmin could be sponsored by an UMNO leader to return to UMNO.
Question is whether the UMNO leader is currently in a politically strong position or not to do so. Interesting times, eh?
at 2/10/2022 06:11:00 PM