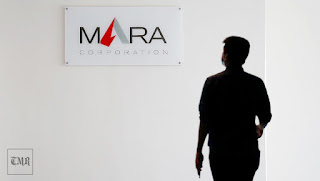 The MARA Corp issue was diverted from public attention as it was overshadowed by other more "exciting" development in the social (including legal-religious), politics, and economics areas.

Statements from MACC, and MARA contributed to the perception the problem is being swept under carpet by the close service government organisation. Probably, there is the intention to save this critical organisation for Bumiputera empowerment from further public embarassment.

However, there should not be any more cover-up. Long overdue for a major clean-up. Decades ago, efforts by many including educationist Tun Arshad Ayub to review and revive MARA were railroaded by MARA bureaucrasy.

Now that its being thrown under the bus again, it takes a recent major event to bring back relevance to the issue. Obviously, it has nothing to do with the Johor state election. Though situation in government could see the snaky civil servants shed their skins to change colour back to blue, it is not.

With a comedian as President, Ukraine suffer from lack of a decisive leadership who won via reality show campaign. When faced with the dire situation, he could only say Ukraine is left to defend themselves.

It means a bigger embarassment for the US President and Vice President. Tucker Carlson from the conservative pro-Republican Fox News made a stinging attack on the US "deterrent" reaction to the Russian invasion. One of his argument has relevance to MARA Corp:

But lifetime federal employee that he is, Joe Biden did the opposite of that. His first instinct was to protect the bureaucracy, not the country, the bureaucracy. So not a single person from the Pentagon or the State Department was fired or even reprimanded. In fact, famously, the only person who was punished in the end for that historic debacle was a marine colonel who complained about it. He went to jail for complaining. And you will see the same response this time after the disastrous invasion of Ukraine. The American officials who so publicly trashed this country's credibility will be promoted for it. They always are.

And, former Attorney General for California, Kamala Harris is not providing the desired leadership. As lawyer, she is bounded by the constraints of her legal mentality.

The MARA Corp equivalent is legal officer, Iskandar Zainuddin who is dedicated to find ways to preserve status quo of doing nothing or whatever is happening. Subsequent to the police report made by Iskandar and his other implicated collegues that one Saturday, the investigation by MACC seemed  diverted to pursue some suspicious corporate credit card bills.

Corporate card are usually given to the top officers of companies. However, only the credit card of  Executive Director Dato' Suhaili Abdul Rahman is in question. How about the one to acting CEO and 52 grade Noor Irwan Marmin? 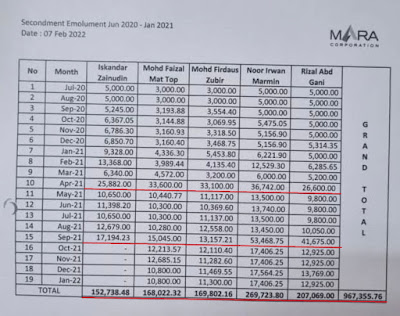 The credit card issue seemed petty when compared to the RM967,355.76 the five seconded lower ranked officers from MARA rewarded themselves the additional allowance to top up their MARA salary as reported by Edisi Khas and Sabahkini2.

The credit payment are handled by the MARA Corp officer. They have the approval power and are cheque signatory. If any questionable bill were paid by MARA Corp, then it is their own error and raising it to police is suspiciously a sheer desperate attempt.

It is certainly not reassuring to hear the five officers called to give statement by MACC but not given remand order.

One possible argument put forward by the officer is that they are subjected to Company Act.
However, it is an undeniable fact that they are seconded government officer. They are still subjected to Statutory Body Act and the various circulars from Department of Public Administration (JPA) and Minister of Finance.
Had the five received the approval for the Board of Directors, it still remained wrong. It shows the officers misled and wrongly advised the Board. Officers under the cross fertilisation program and involve government servants receiving salary from government can only receive the maximum of 25% allowance to their basic salary!
The circular by MOF state so because the program is meant to learn from the private sector and not to lead the companies. From the integrity point of view, they cannot receive the money despite approval by the BOD!
It is unfathomable how their allowances were calculated to enable them to receive money not in accordance to their basic salary. Unless the salary are revised, their allowance cannot be revised. Even though it is a subsidiary, they are still bound by circulars from JPA nd MOF!
Incompetent DG and BOD 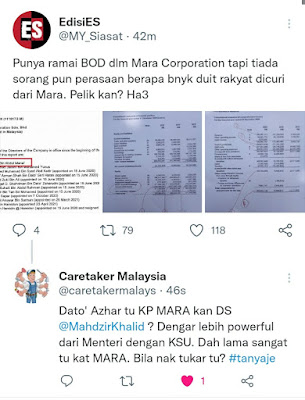 Azhar Manaf defense of his errant officers does raise concern and Edisi Khas has picked it up. MARA Corp looks to be a financial failure and as the empowered person and longest serving member of the Board, he is responsible to the public. 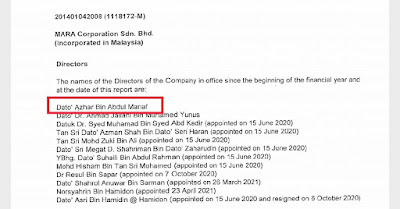 More embarassing, other member of the Board of an operational-level company of MARA comprise of highest level officers in government such as the Chief Secretary to Government, Tan Sri Mohd Zuki bin Ali, then Secretary General to the Treasury, Dato Asri Hamidin and Secretary General of Ministry of Rural Development, Datuk Dr Ahmad Jailani Muhammad Yunos.

The losses from operation for FY 2020 is RM45 million and yet the Board of Directors of MARA Corp could allow officers inexperienced in business and corporate affair to allegedly reward themselves. Are the top level civil servants so incompetent and reckless in their decisions at MARA Corp?

To continue, not only are the five officers suspected of self rewarding themselves, Sabahkini2 suspected they may have approved for the renovation of the MARA Corp Chairman office without the powerful Board approval.

It is contrary to the adamant attitude of these "Sir Humphreys" that MARA Corp be board-managed instead of giving the more experienced corporate CEO Dato Badlisyah Ghani the leeway to plan, assemble his management team and execute his plan.

Do not be surprise they used Badlisyah's argument to the police and MACC to probably justify themselves being empowered to reward themselves.

Minister political will for change?

The Minister Dato Mahadzir Khalid sounds reassuring to say his Ministry will take action on MARA upon completion of investigation, but could he do so with his Kedah UMNO Deputy Liaison Chief defensive of the five officers?

What if the DG as "defender of bureaucrasy" proposed to promote another unqualified and lower grade officer as COO, does Mahadzir have the leadership to refuse these government officers more interested on their self interest over the organisation's success or turning it profitable to fund Bumiputera education?

The talk of restructuring MARA is stale and have been said upteen times over decades but nothing happen. Overhaul MARA Corp or close it. Its sickening to see these greedy but incompetent officers be allowed to roam!

If investigation is completed in such a short times and announced by February 18th, there is two possibilities - it is already an open and shut case or NFA. The ball is at the feet of Deputy Public Prosecutor, Dato Wan Shahruddin. Unless head of prosecution at AG Chambers, Dato Nik Suhaimi goes into self doubt mode, there should be a case.

The only logical option left to detour the process is by abusing police report.

Another usual practise of civil servants is to instruct their underlings to cold storage or boycott officers they suspect at their whim and fancy. It will be in the same manner they accused several officers of leak and was rejected by BOD for lack of proof.

When Barua Tun 'talk cock' loudly.. it fullest of shame on you Jessy Gaygay..!!

On February 24, Rohana was reported to have spent about nine hours at the MACC headquarters to give her statement to the Commission to assist in the investigation under Section 4(1) of the Anti-Money Laundering, Anti-Terrorism Financing and Proceeds of Unlawful Activities Act 2001.

It' already 2 countries have mentioned the name of Zety and her bandit family. When does the MACC want to freeze the account and confiscate Zety's property with the family of the bandits ..!?