The real culprit of MARA Corp revealing themselves 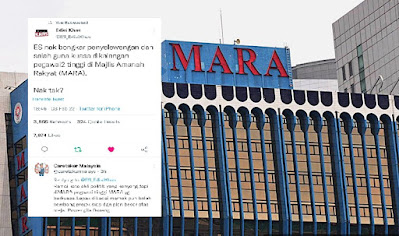 Without a proper identity and trumpet blower similar to Lalitha than whistleblowing or whispering, they hardly qualify legally for witness protection. Nevertheless, they received certain degree of respect.

When told Edisi Khas have been off target lately and exposed their lack of technical competency, one law enforcement high official confided he dare not comment. "We can never know what they know".

Edisi Khas have the advantage of information beyond the access of the public in their revelation on the inner sanctum of police force, MACC or certain law enforcement outfit. How much is true and how much is fiction, the public is not in the capacity to verify.

In their recent episode against Tan Sri Azam Baki, few claims made with regard to Securities Commission and the related Securities Act indicate they were guessing and prejudical in their assessment of a highly technical and legal matter.

Nevertheless, they have been ruffling quite a few feathers with their revelation on MARA Corp made over the weekend. Their hint and first salvo here and here.

Civil servants, the culprit?
In their series over the past two, three days, they revealed top 5 MARA seconded lower ranked officers to MARA Corp have been feathering their nest.
They allegedly rewarded themselves with exorbitant allowance beyond their government grades allows and their comparative corporate managerial capability, capacity, and experience.

It turns out the top MARA official seconded as management are significantly of lower government grade in the lower 40s and comparably lower then those with grade 52 in MARA Corp organisation.

It is not ascertained whether they was any common benefit for their bosses sitting on the Board of Directors.

If the widely held belief in the past that Dato Badlisyah Ghani and his team were manouvred for removal by envious and self serving politicians and corporate personalities, it is becoming more obvious that it looks to be civil servants ganging up to protect their turf.

The documents revealed by Edisi Khas twitter indicate the possibility that there have been outright wrongdoings by MARA officials, including high officials.

Captain M blog that was critical of Badlisyah in the past have been training their guns on 5 top civil servants in MARA Corp here.

MACC have responded to the series of revelation by Edisi Khas twitter over the weekend to announced on Saturday an investigation will be carried out on Monday: 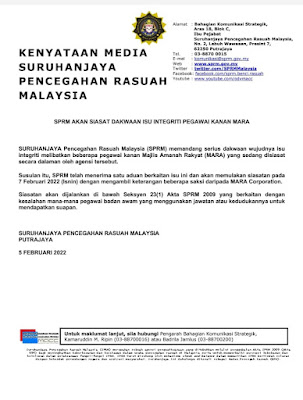 The 5 MARA Corp high officials responded to each make a police report at their favourite or convenient nearby balai at Dang Wangi IPD on Sunday. FMT reported below: 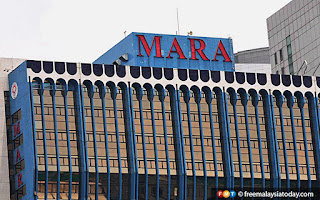 Police confirm that they have received separate reports from the five Mara officials.

PETALING JAYA: Five Mara officials named in a letter alleging issues of integrity and abuse of power relating to Mara Corporation (Mara Corp) have denied being involved in corruption.

They claimed the complaints against them were a distraction from a board member’s wrongdoings.

They denied involvement in abuse of power as stated in a letter shared online by Twitter account Edisi Khas. The letter was allegedly sent by executive director Suhaili Abdul Rahman to Mara chairman Azizah Mohd Dun.

The five also alleged that Suhaili had defamed them in the purported letter.

One of them, in his report, also claimed that Suhaili was trying to distract Azizah from abuse of power committed.

COMMENT: This blog have said enough of Suhaili.
Documents revealed by Edisi Khas here, here and here alleged the five MARA Corp officials have been rewarding themselves handsomely on top of their salary with MARA with extra "income".
Sabahkini2 here headlined 7 officers allowance is a whopping RM29,000 per month and allegedly with Board's prior approval. However, the allegation is the amount could have been RM70,000 per month.
The detailing should be saucier. Sinar Harian reported here.
If there is Board approval, what was the amount approved and what is the amount they actually rewarded themselves? Was the approval back-dated or administrative or mere cover-up?
As an explosive issue of public concern and MARA is close to PM's heart, it has to be investigated by no less than Bukit Aman investigators themselves and under close scrutiny of IGP himself.
The MARA Corp officers responded in their police report by revealing on Suhaili.
Apparently, sources claimed the issue raised is a credit card claim for a Louis Vuitton bag costing few hundred thousand meant as a gift for the outgoing Minister, Dato Dr Latiff Ahmad. Read MI here.
However, Latif denied receiving the gift.
In MARA Corp, the last heard is the purse is controlled by the MARA seconded officers or precisely only they are the cheque signatories. If there are others issued MARA Corp credit card, police should dig further?
In the usual government servant mindset, should the underling have corporate credit card, then their bosses should too. Since Edisi Khas picked on him here, here and here, was MARA DG issued MARA Corp credit card too?

On Friday, Azizah had denied claims of mismanagement and said investigations had been initiated into Mara Corp to review documents and ensure the company was managed properly.

She said all Mara’s subsidiaries were regulated under the Companies Act 2016 and that it would never protect guilty parties if any wrongdoing had been committed.

The 17-page letter was said to have been written at Azizah’s request for an integrity inquiry to be conducted into officers who had been “loaned” to Mara Corp.

It highlighted alleged wrongdoings by the five Mara officials in a “cross-fertilisation programme” and listed “backdated” payments allegedly received.

According to the letter, Suhaili said the backdated payments were made without his knowledge or that of the board of directors.

In a statement yesterday, the Malaysian Anti-Corruption Commission (MACC) said it had received a complaint on the matter and would call up several people from Mara Corp to give their statements tomorrow.

The investigation would be conducted under Section 23(1) of the MACC Act, which deals with using one’s position to seek gratification, whether for themselves, a relative or an associate.

Unproductive twist and turn
The move by the 5 top officials could be cynically seen as diversionary to cover their public image by redirecting blame to Executive Director, Dato Suhaili.
Few correspondances here and here involving Suhaili revealed by Edisi Khas got on their nerves.
The buzz in MARA is Suhaili is due to be removed or given option to resign. The same fate to the previously much talked and controversial former banker, Dato Dr Jameelah on the MARA Council of both PH and PN government and her collaborator in Permodalan MARA Berhad.
Apparently Dato Megat Daniff Shahriman Dato Zaharuddin have resigned from MARA Corp BOD and the Uncle Don chain of restaurant owner is only Board member at the operational subsidiary for UniKL.
There will be the expected twist and turn as civil servants in MARA will be encircling the bandwagon to defend themselves against external threat.
Badlisyah was sent on gardening leave using technicality just days prior to him submitting the audit finding and his corporate plan for the Board of MARA Corp's endorsement.
Apparently it involves sending back the seconded but non-functioning MARA officers back. It was a respond to threat affecting their extra "income".
If Suhaili is entitled to use corporate credit card, are there other members of MARA top official allowed to have MARA Corp's corporate credit card?
MARA Corp still not get their act today but the civil servants in MARA have been envious of the payslip of corporate people hired and collaborated with less than competent, perhaps outrightly lazy, politicians.
When they achieved their target, they trained their guns on the collaborating politicians to allegedly reward themselves.
MARA is supposed to be empowering the opportunity deprived Bumiputera and not the MARA officials or their already urban and affordable cronies.
The indigenous people (or Bumiputera) should be outraged by this revelation. They were not when this blog started revealing on MARA Corp since end of 2020, or perhaps from 2015 on the preceding organisation.
If they are still not and take the development with scepticism, they do not deserve such an institution.
MARA ... money always run away, claimed Uncle Rahim the administrator in our days in MRSM. More than 40 years later, it still is.
at 2/06/2022 10:57:00 PM

Well done. I love these attacks on the corrupt. Please continue. But to balance it we must also pursue the other type of corruption. And these are these are businesess funded by drugs and prostitution money. Wah these people appear so innocent one. Cannot! Weed them out also ok? I hope there are no political party funded by these people.