Investigated MARA officer claimed MACC is in his pocket 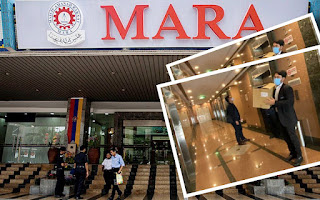 A Little Bird claimed one of the five MARA officers seconded into MARA Corp, exposed by Edisi Khas and investigated by MACC in their raid yesterday arrogantly boasted to his collegues in MARA that he has got MACC in his pocket.
Whether it literally means MACC officer was bought or MACC investigators bought into his explanation hook, line and sinker, it is not confirmed at the moment. It does raise concern that MACC announcement on Saturday gave MARA sufficient time to cover-up any wrongdoings.
One "expert" on government procedure claimed they could do a back-dated Board of Directors resolution. Perfectly legal, but ethically questionable practise.
Yesterday, MACC raided MARA headquarter, MARA Corp office and MARA Corp company secretarial company, Prudenz Corporate House Sdn Bhd from early morning 9.00 AM and left with documents.
Media reported the focus of investigation is on the integrity of the implicated officers under Section 23 (1) MACC Act 2009 relating to using the post and position for self benefit.
Prior to that, the implicated MARA Officer made a police report at the Dang Wangi police station to reveal MARA Corp Executive Director, Dato Suhaili Abdul Rahman abused the corporate credit card issued to him by MARA Corp.
This blog is leaning to the view that it is a mere after thought to redirect blame.
Suhaili
Suhaili has responded with a challenge to prove the allegation he abused the use of the credit card, particularly the allegation bandied around that he purchased of a RM200,000 Louis Vuitton bag as official gift for Minister, Dato Dr Latiff Ahmad.
Suhaili claimed he spend within the stipulated terms and conditions, in accordance to his entitlement, and any that is not relevant, be deducted from his pay. However, Dato Najib revealed he used it to pay for PPBM party function.
Suhaili responded to explain to PPBM-backing Utusan Malaysia that it was for a Ramadhan break-fast in Labuan for orphans and tahfiz.
A retired policeman observing the ordeal from afar commented that the MARA officers and Suhaili are not clearing the matter on allegations made against themselves, but revealing on the other.
It is much talked about that MARA top officials have been manouvering to rid of Suhaili by taking the political opportunity that the Minister-in-charge is not from PPBM but UMNO. They forgot that Suhaili is from Sabah, and relationship between UMNO and PPBM in Sabah are fairly harmonius under GRS.
No smokescreen
A Facebooker here reminded that any attack on Suhaili should not be used as smokescreen to cover investigation on the five officers.
Neither it is to cover the appointment of Suhaili at the concurrence of then Prime Minister, Tan Sri Muhyiddin and Minister in charge, Dato Dr Latiff Ahmad, and investigation should be done all the way to the MARA Director General.
Certain quarter expect the MARA Director General, Dato Azhar Abdul Manaff would be doing a police report at their favourite balai in Dang Wangi too.
Apparently, this morning all e-mails to and from MARA Corp are block. This reminded of the manner Dato Zaiton Hassan flexed her muscle at Tabung Haji. What else, Azhar will use his power. 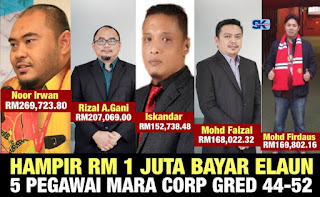 This morning Sabahkini2 here made a damaging allegation that the MARA DG collaborated with the MARA Corp General counsel Iskandar Zainuddin in an "I approve you and you approve me arrangement" and a cover-up attempt on their current allegation.
To what extent it is true, it is left to be confirmed and investigated. No proof was provided.
Nevertheless, Sabahkini2 revealed documents to show the MARA officers increased the allowances from RM3-RM5,000 per month to more than triple their monthly allowances to RM13,000 to RM53,000. This is on top of their pay at MARA.
This probably led to the suspicion that MARA DG was financial rewarded too.
If these officers are working in a Bank, their equivalent rank would be Senior Manager, at best. This is based on years of service consideration and not necessarily on merit.
They do not have sufficient business or corporate experience to head MARA Corp. There are no justification for their allowances.
As for FY 2020, MARA Corp lost RM9.9 million thus justify MACC to investigate.
In addition, the manouering by a party amongst the five MARA officer put MARA Corp in the position to lose their case against the removed Dato Badlishah Gani and his management team. It could cost MARA Corp up to RM20 million for breaking contract.
Silent MOF
The exchanges exposed the going-ons in this GLC is not well. Edisi Khas raised the issue why Minister of Finance is silent.
The financial affairs of GLCs are under the purview of MOF. Is pro-PPBM Tengku Zafrul protecting Muhyiddin, and PPBM politicians?
Then the Auditor General office should move in immediately. MARA is a highly sensitive outfit to be left out of control and quite sure Dato Seri Ismail Sabri would not tolerate such going-ons in a Ministry he once led. Apparently, it was said current DG received promotion during Ismail's tenure.
Muhyiddin is not a political threat anymore. His bluff been called and he dare not push the button on Johor or Federal government. Ismail has nothing to worry to act on the PPBM politicians.
From the privatisation nonsense of MARA Holding, closing up of property arm, MARA Inc, football sponsorship of MARA, and current crap at MARA Corp, this is the time to move in and clean up MARA. Once and for all, restructure MARA for the true purpose for the betterment of the deserving Indigenous people.
Send any government officers resisting the change to jail or put them on garden leave to be subjected to investigation. That is the only way to deal with the Sir Humphreys of the world!
* Edited 10/2 8:54 AM
at 2/08/2022 03:40:00 PM