Is it the end of tunnel for Anwar the Great White Hope? Read the article from The Economist dated July 30th, 2009: 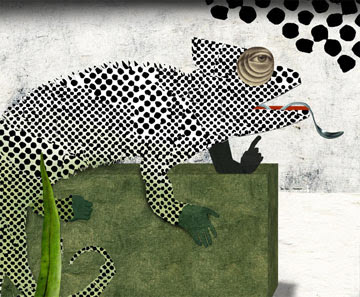 The rise, fall and rise of Anwar Ibrahim, South-East Asia’s most extraordinary politician

ONE evening in mid-July Anwar Ibrahim was deep in the rubber-tapping state of Kelantan in northern Malaysia, urging a crowd of rural folk to vote for a devout fishmonger. The candidate was from the conservative Islamic Party (PAS). A tiny by-election for the state assembly PAS already dominates is ordinarily small beer (or would be, if PAS allowed such a beverage, which it does not). But Mr Anwar needs PAS. For the paradox is that without the Islamists, the alliance he leads of Malay modernisers, Indians and secular Chinese has little chance of driving the ruling United Malays National Organisation (UMNO) from power. The coalition that UMNO dominates has ruled Malaysia since independence in 1957. Mr Anwar longs for UMNO’s destruction. The feeling is mutual.

That morning, Mr Anwar had been in Perth where he had met Australia’s foreign minister. What had he been doing with Stephen Smith? “Plotting,” replies Mr Anwar, with a conspiratorial wink. Mr Anwar spends a lot of time abroad with national and religious leaders whose names he drops slightly too easily into an engaging conversational style. He moves like quicksilver from one intriguing subject to the next, but you get the uncanny sense that he is speaking to what interests you.

Mr Anwar thinks he will soon need international support. Two days after stumping in Kelantan, pre-trial hearings began in a case in which Mr Anwar stands accused of sodomising a political aide “against the order of nature”. Mr Anwar vigorously denies the charges. He says he is the victim of a political stitch-up. International outrage might help him. Much is fishy about the case. Photographs of the former aide who brought the accusations show him with UMNO members, including people close to the current prime minister, Najib Razak. The charge has been changed from sexual assault to “consensual sex”, yet his accuser has not been charged. (All homosexuality is illegal in Malaysia.)

Mr Anwar has been here before. In 1998 he was charged with corruption and homosexual acts. In custody, he was beaten up by the chief of police. He spent six years in jail, mostly in solitary confinement, until his conviction was overturned. Upon release, his political career seemed over.

It is easy to forget now but for many years Mr Anwar led a charmed life. He made his name as an Islamist student leader in the 1970s and was even jailed under the draconian Internal Security Act. Then he shocked his former colleagues by joining UMNO, where his rise was spectacular. By 1993 he was deputy prime minister and heir to Mahathir Mohamad, the country’s long-serving leader. Malaysia seemed about to fall into his lap. “Ah,” says Mr Anwar, “the good old days.”

But during the Asian financial crisis of 1997-98, Mr Anwar moved too soon against his mentor, who after 16 years in power was not ready to bow out. Mr Anwar railed against the UMNO cronyism from which he had benefited. Livid, Dr Mahathir threw him out of the cabinet and launched Mr Anwar’s persecution. Mr Anwar’s reformasi movement sputtered out with his jailing.

Yet the hopes which that movement represented surged again after the general election of March 2008, and especially after August 2008 when Mr Anwar won a seat in Penang. In the election the ruling coalition lost its precious two-thirds majority which gave it power to change the constitution. It has since lost five out of six by-elections to Mr Anwar’s forces, which also control four of 13 states. In getting out its message, the opposition has been helped by an explosion of internet opinion that has undermined the influence of the UMNO-controlled mainstream media.

UMNO’s back is against the wall. Even its own officials admit to its arrogance, with corruption bound into the fabric of its power. The New Economic Policy (NEP, introduced in 1971) instituted racial preferences for majority Malays, when ethnic Chinese and Indians owned much of business. But instead of helping the poor, the NEP has enriched rent-seekers around the ruling party, while dragging down economic growth. Resentment has spread from Chinese and Indians to poor or pious Malays.

This has made possible Mr Anwar’s strange alliance. In calling for the end to the NEP, he says poor Chinese and Indians need help as much as Malays—but because there are more poor Malays than other races, they will still get the lion’s share of government help. It is a possible way out from the baneful influence of race on Malaysian politics. But the real strength of this alliance is that Mr Anwar’s charisma and political nous holds it together. Alas, that it is potential weakness, too.

The challenges for Mr Anwar and his alliance will now multiply. For a start, Mr Najib, prime minister since April, has said the NEP must adapt, stealing some of his opponent’s thunder.

Then there is the time-consuming trial. Mr Anwar says he will win whatever the verdict. If he is acquitted, the government which brought the case will be discredited. If found guilty, tens of thousands of supporters will take to the streets. Mr Anwar hints tantalisingly at new information in a murder case that has gripped the country partly because of its links to Mr Najib. This, he suggests, gives him ammunition to fight back.

Intriguing, but it is unlikely to be enough. If Mr Anwar does go to jail, the alliance may not survive the loss of its leader. If he calls out his supporters—for something of the martyr lurks in him—he may be blamed for the ensuing chaos. And if he appeals to international opinion, his local supporters may question that.

This points to a trap waiting to catch the silver-tongued Mr Anwar, who deftly tells different audiences—religious or secular—what they like to hear. The same blogosphere that helped his meteoric rise may one day pay more attention to his chameleon qualities. Malaysians would then come to ask more closely: who and what exactly does Anwar stand for?

Ho ho ho. "Mr Anwar" will not like it when an international magazine writes something that seem to give him the pins and needles feeling.

I wonder if Anwar will sue the Economist for RM 100 million.

it's all about you Datuk Seri, Datuk Seri..I wish you'll win against Saiful. So that you'll fight with BN, man to man.

Until that upon of time I do hope that one day you'll be rememberred as a great loser because what goes around goes comes around...
peace!

Anwar will probably organise another street demonstration tomorrow. Perhaps a march to the Turkish Embassy to deliver a memorandum to take action against the Economist.

Anwar's game is getting old, suprisingly it took the west that long to realize how Anwar had twisted and turn the true facts about Malaysia.

I wonder why our local media can't come up with constructive articles such as this with regards to Anwar, no need to sensationalize, just state the facts, let the Real Rakyat decide whether they want to this man, a self righteous lunatic a chance to be PM.

The Economist got it terribly WRONG when they labelled Dr.M as 'an economic pariah' when he introduced limited exchange controls in 1998!

So, why should we trust their judgement now. How have they suddenly become credible?

They will get it wrong again!

dpp
We are all of 1 race, the Human Race. That is all that really matters.

This was what Anwar said about the ISA on 24 May 1994 when he was Deputy Prime Minister while officiating a "Mesyuarat Agung Antarabangsa ke 27, Majlis Ekonomi Lembangan Pasifik (PBEC)" in Kuala Lumpur, Anwar Ibrahim said:


On 28th Oktober 1987, Anwar's statement when he was Education Minister on the arrest under ISA of both BN and Opposition members during Operation Lallang:

“The goverment’s decision to ban all public rallies showed that it placed national security above the aspirations of certain politicians and political parties…..The government’s actions were carefully planned and placed priority on national interest not that of any particular group. There can be no compromise on national security in a multiracial country like ours.”

Fast forward to 1st August 2009, this is what Anwar Ibrahim defacto Opposition Leader and wannabe PM said in the anti ISA demonstration:

“We gather today to fight a cruel law under a cruel administration..”