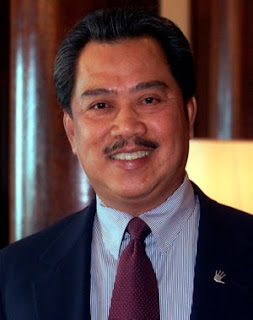 Unker Kit raised issue on use of TLDM Nuri helicopter to attend invitations to meet the rakyat. Opppss ... meeting UMNO members is not considered rakyat. He claimed it as abuse of Government facilities for party use.

The sad part is that there seemed to be a lack of sensitivity by LKS to the fact that the Nuri heli had to make an unscheduled stopover due to bad weather. It could have cause his life.

Puritanically, Unker Kit may have some basis but his accusation should not be limited to only TLDM Nuri helicopter but all facilities accorded to the Prime Minister and Deputy Prime Minister.

As head of the nation and shouldering much responsibilities, they are important "asset" to nation. Thus, their security and safety is of paramount concern.

By picking on Muhyiddin's use of the TLDM Nuri helicopter, he should have an alternative solution for the DPM which fit the element of security and safety accorded for Deputy Prime Minister. As usual, our Unker Kit is only known to criticise but do not have any proposed solution.

Since he doesn't have an inkling on the safety and security aspect of DPM's logistic, he should ask the Ketua Umum Pakatan Rakyat. Perhaps he had a different arrangement during his time as DPM.

After all, he is so puritanically clean that he "never" abused his position and facilities for matters outside Government use. Off course, picking on the use of police to turnover Umi Hafilda and Azizan's police report is "unfair."

If Unker Kit doesn't mind answering, how does he differentiate his own Government paid travelling expenses to visit his constituency in Ipoh and the convenient stopovers for party purposes? Or did he return to Kuala Lumpur first before pursuing his trips to other places?

This is the deal.

As DPM, the safety and security of Muhyiddin is given much concern. He travels with Government bodyguards and security personnel. Although it was only a Nuri, but it is still safer than taking any other mode of transport. TLDM would provide extra care of the fleet of Nuri for our DPM.

Unless Unker Kit have a better alternative logistic plan that guarantee the safety and security of our DPM, their travelling plan is best be under the care of our security personnel and facilities.

Frankly, for Unker Kit to pick on Muhyiddin, is he absolutely sure all our elected officials do not abuse their entitlement? All our Member of Parliaments and Senate are entitled to travelling expenses to their constituencies. Do they abuse it for party purposes?

They will say no but bet my next month's pay that they all do abuse it. Some many years back, there was a former MP for Jeli by the name Affendi whose claim reached an astronomical figure of RM700,000? To refresh Unker Kit, he was an opposition MP from PAS.

Update: My last word on this. Read Aziz Hasan's here. His quote:

... should Pakatan Rakyat come into power, this is one change they cannot affect. If only these boys know how a government works, regardless the party in control. To be sure Muhyiddin was not the first DPM to be in such a situation. Neither would he be the last.

Helloo..aren't you listening? He's using the government heli which is bought using the people's money for UMNO's business which has nothing to do with governing! If he is eligible for the government machineries for his party, then every political party can use them too lah. They pay the taxes too you know!

This is the third world mentality. You claim to be knowledgeable but you are just plain stupid! UMNO is a political party NOT the government! Malaysia is! All the asset that is bought using the people's money is for the use of the people only; NOT for the party!If UMNO wants to use the heli, go buy it yourself, using UMNO's money from the fund collected from its member.Don't steal our property and claim to be yours! They're not!!!!

I believe you are clever but you are not listening.

How do you proposed the safety and security of the DPM? Take Airasia and ride a bus to Kudat?????

How did Anwar do it last time around since you are Anwar inclined?????

Well, this is politics and par for the course. If DPM an UMNO can't take it, they should quit and go sell goreng pisang or something!

DPM has been going around making scurillous and outrageous statements about Pakatan and calling Anwar 'Traitor to the Malays'.

So, if it's all out war, then expect the arrows and barbs to fly.

But do feel free to explain by what right DPM gets to use for FREE Govt and Taxpayers paid for helicopters for UMNO related Party work and functions.

After all, a top police officer was recently prosecuted for doing precisely that sort of thing!!

We are all grateful to God that nothing happened to DPM and that he is safe; but that has nothing to do with the issue raised by LK.

Abuse of Gvt facility is abuse, whether by the DPM or a filing clerk!

dpp
We are all of 1 race, the Human Race

Your subjective first world and others third world mentality only existed in your ass, don't enforce it into our ass because we never agreed to play our backside.

I guess Lim Guan Eng uses his own personnel car to his Party meetings.
So does Nicky and Azizan...

On an unrelated issue - any comment on the proposal by the ex-senior management of PLUS to buy the company?

What important is whether it is right or wrong. If it is wrong, then it is wrong, immaterial who did it. Just because Anwar did it when he was DPM does not make it right for Muhyiddin to do it now, if it is wrong in the first place.

The fact that the accusation is limited to only the use of the Nuri helicopter only means the accuser was not thorough. That does not absolve Muhyiddin of wrong, if the act is wrong.

The fact that the accuser fail to provide any suggestion on how to tackle the security concern also is not a good enough reason to just dismiss the accusation.

Most important now is to confirm whether the act is wrong or right.

The insinuation of rampant abuse (willingness to bet one month salary) only strengthen the importance of confirming the status of the act.

Dear A Voice,
Are you saying that this blatant abuse (assuming he did the visit in the capacity of Umno VP) is acceptable because others are doing it too? Lets be fair and call spade a spade. Or would we rather be indiferrence and have this abuse continuing perpetually (regardless who is in power)?
Hafiz

Was George Bush moving around with bicycle while campaigning for the second term?

Cheap cheap cheap, soon unker Lim is selling his soul. These people used to fight fire with fire, I mean bringing up issues with equal strength. I guess they are now running out of ammo coz they've become politically bankrupt.

It looks like all 3 PR parties are having problems...

5.DAP as a party in general linked to underworld mob and gangster

6. PAS Nik Aziz with his Only PAS members go to heaven thingy.

7. DAP Khalifah LGE 'spit' at the dark skinned minorities in KBP and leave the people helpless and homeles..

fuhhh..Seems like MUhyiddin is right..I give PR another year before they start to talak-ing each other..LOL

Taking a lesson from current PR government, they critise because they can't do it. Can I say these people actually JEALOUS of not able to use the facilities?

It is not like they use it to go balik kampung or use the facilities to drop them for a shopping spree in Batam or Bandung or such right? As long as it is regarding rakyat, there really no hidden agenda. I as one of the tax payer doesn't mind if he use it for the sake of seeing the rakyat a.k.a pengundi. If he use it to go balik kampung or other personal use, then its a no-no.

Come on LKS, don't spice up the spagetthi, you'll ruin it. Go see and solve your own crisis. Don't always attack other people. U make me sick to the stomach!

Lim Kit Siang only knows how to sow the seeds of hatred without any provision of a solution.

Lim will remain a failed politician who never managed to meet his followers aspiration of a Malaysian Malaysia.

Follow the S'pore Leaders. Since the PAP came to power in 1959, all its leaders from the PM downward travel overseas by scheduled commerical flights.
S'pore don't own any private jets.
Penang CM got his inspirations to travel on economic class, I believe from S'pore leaders example.

Why did you bother to comment on this old man crabs. This guys will never manage to control Malaysia caused his only concern is his own people. Others all boleh jalan. And PAS, please continue to bow low to this crap DAP...Good.. much..much lower.. there you are.. the lower the better. Unker Lim.... Yes...yes that feeling of greatness...is so good ...right. Enjoy it...

Why did you bother to comment on this old man crabs. This guys will never manage to control Malaysia caused his only concern is his own people. Others all boleh jalan. And PAS, please continue to bow low to this crap DAP...Good.. much..much lower.. there you are.. the lower the better. Unker Lim.... Yes...yes that feeling of greatness...is so good ...right. Enjoy it...

"Penang CM got his inspirations to travel on economic class, I believe from S'pore leaders example"