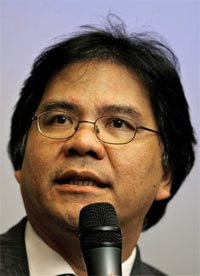 MAS announced it's second quarter results today. Net profit was RM876 million and offset the first quarter loss of RM695 million for a first half profit of RM181 million.

That announcement manage to brush aside analyst expectation of further loss. Why bother about these life is a straight line forecast and everything remain the same like before analysts?

With the new accounting scheme of mark-to-market for any outstanding futures hedging, the real number that need highlighting was intentionally hidden. Read on to know stories shrouding their fuel hedging debacle.

The financial presses were really 'bodoh'. None bother to ask about the operating profit and loss. In the first quarter, MAS posted an operating loss for RM138 million. What was the second quarter like?

Read the Bernama report first below:

This profit offsets the national carrier’s RM695 million net losses in the first quarter, leading to a first-half net profit of RM181 million.

Due to the oil price recovery since March 31, 2009, MAS’ fuel hedging losses of RM640 million in the first quarter has been reversed with a RM1.3 billion gain in the second quarter, the airline said in a statement.

Since the beginning of the year, the airline has implemented aggressive sales campaigns to deal with the worst crisis facing the industry.

In response to the growing demand, with the domestic load factor up by 69 per cent in the second quarter, it said the national carrier had increased the capacity by six per cent by adding more aircraft for the domestic sector.

The airline also made substantial load factor gain for its international routes with loads up 11 per cent to 65 per cent compared to 56 per cent in the first quarter.

“We are managing well in this crisis. While the operating environment remains tough, the load factors have increased due to our aggressive strategies to boost sales.

“On international routes, we have performed better than the industry average as we are less dependent on the front end,” he said, adding that the airline forecast booking numbers for the second half of the year are encouraging.

All that bullshit about rising load factor and yet no mention of operating P&L.

In the first place, load factor is the old variable to manage airline. Pushing for purely load factor was the one that got former Managing Director Dato Fuad the boot for taking MAS into loss territory immediately after the financial restructuring. The fancifully named sell and leaseback scheme made Azman Mokhtar's Binafikir famous.

The important variable today is revenue per seat.

Before announcing MAS's operating loss, this is what was heard of MAS fuel hedging scheme. They left it to the total discretion of Investment Banker Morgan Stanley Singapore. Upon realising the mess Morgan had made, they were considering of hiring an oil futures trader, which they should have done in the first place, but he declined. The whole market have been talking about their messed up oil hedge position.

It is unheard of to totally out-source ones financial market hedging to others who
are without knoledge of the whole company's financial variables and constraints. Off course, this is market talk. It is usually more rumour than the truth. But beware that market talk move markets.

The absurd part of this is the much confidence given to Dato Seri Idris Jala to weather the storm from the oil crisis. That was the story sold to have him extend his stay at MAS. MAS also had highly paid accountants like foreign-trained Tengku Azmil and the many spectacled young Ah Piows from Ernst & Young.

The truth is the Butcher from Shell was never an oilman. He must have butchered all those with experiance in fuel hedging within the Treasury team built from the days of Encik Shahril and Low Chee Ting. Now this is the time to repeat my incessant and repeated complain of young inexperianced know nuts brought into MAS to replace those experianced and appropriately described as knowledge workers.

The mistake by Tun Lah to entertain the recomendation of Idris Jala by Kamaluddin's friend is also the second quarter operating loss of RM421 million. And that is a further deterioration from RM138 million in first qurter.

So what the f**k is this talk of rising load factor? Don't bullshit about net profit. If your operation don't make money, how are you to keep the Company afloat?

this is what is so worrying about how things are presented in Malaysia. People still try to present a good picture and do it without flinching. This means people are willing to tell untruths as they think it will present them in better light. I always believe that you should tell the truth but if you are having to do that in the face of crisis or problems, then at least acknowledge those problems and that you have a plan to turn things around. You don't turn things around with creative accounting

Pls if anyone can explain...

1> The MTM fuel hedge loss for 1st Qtr was few hundred million in the P&L and 3.8 billion in the balance sheet.Why is the MTM gain of Rm 1.2 billion recognised in the P&L.

2>YTD operational losses is abt 620m...and there is still that MTM loss in BS of RM 2.6 billion>>thus the oil debacle can still cost MAS abt RM 3 billion?is that correct?

I agree that they should state the operating loss clearly and then show the effects of mark to market rules.

Otw, many could be misled as to the true results. After all, the operating profit after adjusting for non-cash items like depreciation and amortisation, i.e. real cash flow, is the life-blood of any business entity.

Maybe I should write less politics and target my guns on these robbers of corporate malaysia, then we can become great buddies.

I do not have problem befriending those of different political ideologies.

Just do not expect me to buy into their rhetorics and they get emotional when I disagree and oppose their view.

"They left it to the total discretion of Investment Banker Morgan Stanley Singapore. Upon realising the mess Morgan had made, they were considering of hiring an oil futures trader, which they should have done in the first place, but he declined. The whole market have been talking about their messed up oil hedge position."

Not sure where you got it from, but I never saw any Morgan Stanley banker involved in their hedging activities.. They do their hedging with many different counterparties and had internal analysts.. LowCT can attest to that.. Would appreciate less blaming atas angin unless you can name names, bro!

I say, he has good credentials of massaging figures in MAS. Time to venture into massage parlour business along Kuching waterfront with the help of EKUINAS.

Aiya...oredi nett profit ma....why worry abt PNL detail la....talk like cock but give no evidence...come on la. Don't give speculation....if you want detail PNL go and buy their accounting report lorrr. Touch only on the surface and speculate 99% what is inside. Good journalism ma? Malu orrrr

There is this article in The Star, which explains how the accounting transactions came about under the new FRS 139. Hope this helps:

Nice one bro, and you are also right, most of the MSM analyst semua makan gaji buta.

I also agree with the editor P. Gunasegaram who thinks that sometimes accounting is an ass, much like law is more often.

When the time is right I will hit MAS where it hurt most i.e the safety, so much so, the public will be scared to fly MAS.

Munir, your days are numbered.

Till next time, adios amigos !!

How is he to attest what you guys are doing now. Masa dia dan Encik Shahril buat dulu, memang professionally done to involve macam-macam broker.

Aisay cybertrooper ... how come you do not know info like this. Kantoi hang!

So Morgan Stanley or not?

What happened to your article on UEM you wanted to pen down after the teh tarik with tan sri?

I mentioned LCT's name because I used to work under him and for several years after his retirement and never did I see any MS trader do the hedging for MAS. MAS wrestled for over a decade with MS to close their derivatives documentation with MS.

The reference to him was made because his name was mentioned in your post.