Why Idris Jala did not reveal and financial press not ask MAS operating loss? 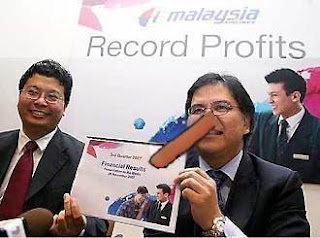 It is from the operating profit that cashflow is generated to maintain the company as an ongoing concern and eventually turnaround MAS. Operating profit will translate into the net profit, God willing could be used to reduced any accumulated losses. Without operating profit, MAS will continually be sucking money from Treasury.

P Gunasegaran wrote here on similar issue raised in the previous posting. However, he did not picked up where we left off. Kalimullah's contemporary should ask why Idris witheld the information and the financial press including The Star did not ask?

It is simple. In fact, Idris used the same generic corporate trick before. By witholding the operating loss, the financial press will highlight on "capital gain" from hedging revaluation. Still, why did he do it?

Idris Jala reminded me of Tan Sri Nor Mohamad Yakcop's past statement to praise him as the best CEO money can buy. See the newspaper clipping below: 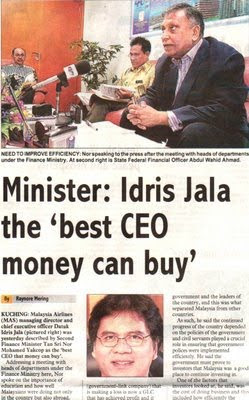 Wonder what made Nor Mohammad impress by the so-called turnaround done by Butcher from Shell?

Butcher merely reduced overhead by retrenching experianced Airliners but later hired young cikus with zero Airline experiance, placed them in numbers at various levels of management, and were paid much higher scale than the senior retrenched staff.

Butcher retrenched the experianced ones so that they are no more pain in his ass to nag him of his amateurish manner in running a full service Airline. He brought in lots of Ah Piow accountants from Ernst and Young whose got no shindick knowledge of Airline.

If there are consultants like Booz Allen Hamilton, McKinsey & Co. and Ethos Consulting, then you know Khairy and Tingkat 4 has their hand in it. For sure, Khairy and Zaki Zahid had a direct hand to change the National Aviation policy in favour of Airasia. Part of the money goes to MyTeam.

Idris did the predictable reorganising of routes. He intended to cut the not profitable routes but Khairy and the corrupt MCA Transport Ministers force them to give some profitable routes to Airasia. The routes cut the company's capacity, which means limiting capacity to generate profit potential for the future.

Is it a suprise MoF II could claim Idris as the best CEO money?

All along, MAS was not performing well operationally. Thus the second phase of the turnaround plan is to show MAS generating operating profits. That way he could get an extension on his contract.

For that he sold MAS buildings and assets locally and abroad. With the smart and manipulative accounting mind of Tengku Azmil, the capital gain appears on the operating profit column.

That's the past. It's too time consuming to display what happened with facts and figures. Coming to the question again, why did he unethically manipulated the results announcement?

See the headline by The Malaysian Insider with it's link below: 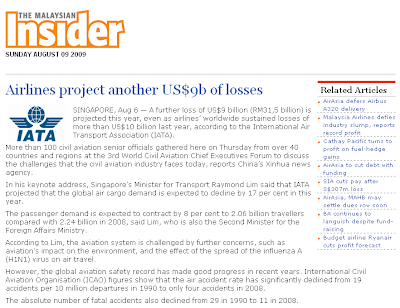 Doesn't that explains everything? With the aviation industry at a loss, don't Idris Jala look impressive for being able to outperform the industry?

MAS Adviser is in slumberland to notice such small but relevent technicality. He is likely to say MAS did well when others' are losing. His cricle of people are still operating. Kalimullah, crony to sleepy and Nor Mohamad Yakcop assisted MAS with this lie with the hope to make sleepy look good. See the headline given by The Malaysia Insider. 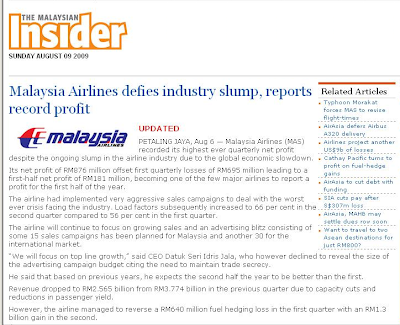 The full report can be read at the link here.

This is a clear cut con job by Idris Jala, Tengku Azmil, and Kalimullah. If there is nothing coming from the authorities, then Tan Sri Nor and Tan Sri Azman Mokhtar is together in this lie. Khazanah has yet to turnaround MAS, Proton and Renong/UEM Group since they were first assigned to turnaround GLCs.

P/S MAS used this blog for it's internal Leadership High Development course to show the natural occurance of rejection towards new management. Hope they continue to do so and be sure to distribute this and previous postings. They need to prepare for another rejection because these postings will be send to high places.
at 8/09/2009 03:40:00 PM

Dato Sri najib have to do something about this matter, i still don't understand why this 4th floor legacy is still here, when we gonna see some major changes?

Why are people like Idris Jala, Zaki Zahid and others (4th Floor boys who been overly paid) are still around?

Is our country lack of good corporate leader's?

Seriously, it is not worth it for you to lose a govt in next GE just because to protect this bunch of clowns!

TO SPRM, PLS GO AFTER KJ, WE WANT TO SEE JUSTICE IS SERVED, JUSTICE WAS NOT MEANT ONLY FOR OPPOSITION, IT APPLIES FOR BOTH PARTIES!

TQ VOICE FOR BRINGGING UP THIS ISSUE AND PLS DON'T FORGET THE CEO OF THE YEAR, THE TNB MAN

Mas credibility is shot..irresponsible to headline as the best ever quarterly profits when in reality there is an operating loss,cash drain and poor yields.

If the Chairman,CEO,COO and CFO is not removed for this fiasco the ethics of 1Malaysia is questionable...

The sin is not the LOSS but the attempt to hoodwink the public with the headlines.

Sadly,for the first quarter the hedging loss was briefly explained away as a notional/provisional only.Yet in the second qtr..the hedging gain was headlined as a result of mgmt initiatives.Heads u win,Tails we lose.

The reality is the hedging loss is still not recovered..only reduced.Wat will it be at the end?

The Khazanah concept have destroyed value..and timely for a complete analysis of its true achievements.

Press did ask and well aware about the operating loss. However the "Wahyu" came down: "Pls follow the press release." - whattodo

One other thing MAS and the compliant MSM are not talking about is how much MAS owes Penerbangan Malaysia Berhad (PNB)for leasing of areoplanes.

Like S'pore, a Govt body, PNB buys the aircrafts and leases them to MAS.

No one knows how PNB operates (lack of transparency), what sort of returns it makes (RoE) and if MAS has been paying them or carrying the debt in its balance sheet.

In the same way that Air Asia has been whacked by the public for not coughing up some $65 million it owes to MAHB for airport tax, MAS should be made accountable.

The problem with MAS is that we don't have the numbers!!

dpp
We are all of 1 race, the Human Race. That is all that really matters.

I don't know I don't write.

My source, late blogger Capt Yusof died before I could sit privately with him.

Nevertheless, I have some doubt with Lim Kit Siang remarks or rhetorics. He is most of the time pelakun felem.

2. He said about letter of support from Minister to secure loans. Mana ada Bank kasi loan on that?

3. Is the property worthless till there is salvage value?

4. Since bond is not guaranteed, why the noise. Kira loss la bondholders.

The news are more of an MCA vs DAP quarrel. But PKZF is not an UMNO issue but MCA problem.

I am absolutely sure Pakatan akyat will not clean up the country from rasuah and corporate abuse.

If the SPRM is being main play thing, will they response to criticism by the rakyat when they are in power?

A repented UMNO and a new deal BN is a safer bet, anytime.

This article only posted half of the story in order Idris Jala to look bad..

1) "Without operating profit, MAS will continually be sucking money from Treasury." - what kinda statement is that? Do they know that MAS has been posting 10 consectuvie quarterly profits since Idris Jala came on board? Even if you strip one-off gains, MAS still posted PROFITS since 2006. The fact that the aviation industry was impacted greatly by the global recession at the end of 2008, it is expected that MAS will post OPERATING Losses. Against the backdrop of 50 airlines have posted losses & gone bankrupt over the last 18 months, MAS is still surviving. Interesting, when MAS posted increasing revenue (RM 10billion to RM 15.5 billion in 2008) and posted profits, no one gives a damn about how well MAS did, but once they post one quarter of losses / or large hedgin gains, the whole world is screaming as if Idris is doing a con job. What kinda of rakyat is this??

2) As for fuel hedging, it is part of the aviation business. Most premium airlines carriers are still hedged. If you dont hedge, you will be exposed to the oil price volatility.

3) "Why financial press did not ask MAS operating loss" ? - It is easy for a man on the street to comment on that. To those who attended MAS media press conference, the media DID ASK about the operating loss and Idris did share...what kinda remark is that? do you think the media /press are stupid enough not to ask? For the headlines put by the media, it is up to them what to highlight as the headline! MAS doesnt dictate on what to put or not to put in the media.


4) "4th Floor Issue" - obviously you guys are "katak bawah tempurung". Look at the Tony Blair adiministration or any Prime minister's department, they have 4th floor equivalent. But the problem with last admin, the issue of the 4th floor boys became very big. The fact of the matter is, its how the 4th floor people manage themselves and people around it. If you start abusing power, than the public will scrutinize.