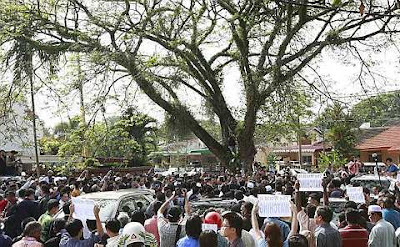 This time, will it be on the tree?
After more than a year of opposition antics playing the blame game, slanderous accusations, and cinematic propaganda, Dato Seri Najib called for more maturity in our politics. The Bernama report below:

Instead of using hasty rhetoric and harsh words, they should opt for reasoned debate, he said.

"We face a world of immense differences and challenges. To overcome them, we should seek out the strength of our forefathers and the spirit that drove them towards independence.

"Theirs was a spirit that sought a better future for their children and the generations to follow. The way they achieved this was by working together in unison," he said in his posting, "Reflections On Merdeka Day", in the 1Malaysia website.

Najib said that one of the distinguishing characteristics of Malaysia "that sets us apart, is our diverse society."

The prime minister said 52 years was not a long time, yet what the country had managed to achieve in that space of time was remarkable.

"We have shifted from an agricultural-based economy to a manufacturing and services economy that exports products worldwide. We have invested heavily in raising health, education and living standards," he said.

Najib also said that in 1957, over half the population lived below the poverty line while now, poverty in the country was less than 4 per cent.

"We have come a long way. Yet, we still have to remain focused on the journey ahead," he said.

To another question, Najib said: "Since the very beginning as a nation, we have always emphasised working together to build a brighter future and what we valued must be shared."

"We also knew that there were those who would use our differences to try to push us apart. When we are at our best, we have resisted those who would tempt us towards these divisive ways.

"At other junctures, we have not always lived up to that ideal. Merdeka reflects the ideal. It's about unity and standing as one united and independent nation.

"Let us remind ourselves how fortunate we are to have other Malaysians, from all walks of life and cultures, at our side to work toward a better tomorrow," he said.

The prime minister was also asked about the challenges in getting the 1Malaysia message across effectively to various groups and communities.

He said one of the goals of 1Malaysia was to stimulate open and honest discussion and the public reaction since its inception demonstrated that it was long overdue.

"These are issues that people feel strongly about. But if you look at what 1Malaysia seeks to achieve, you will see that it does not differ from what our founding fathers were striving for.

"This dialogue will continue and this is why we have NGOs such as the 1Malaysia Foundation in place," he said.

"There is no quick way to reach mutual understanding and there is no fast fix for the issues that still try to divide us.

"The key is to keep talking to one another and work together to resolve them. That is what 1Malaysia stands for and what the foundation will encourage," he said.

The prime minister was also asked about his most meaningful Merdeka memory.

"As the son of one prime minister and the nephew of another, patriotism and service to country have always been powerful influences.

"I remember well the guests who would file in to visit my father in the days leading up to Hari Merdeka. The sense of importance and of men and women building something much larger than themselves still resonates," said Najib who was born four years before Merdeka.

He said the country was still young and growing as he reached his most formative years.

"The spirit of patriotism was strong, the country was new. I remember that sense of promise. I still feel it now. Just as my father looked to the future and the promise that is Malaysia, so do I," he said.

To another question, the prime minister said that since attaining independence, Malaysia had managed to thrive as a nation precisely because of the people's ability to build on their diversity.

He said the sense of national pride and a profound respect for what had gone before made this country stronger.

"Obviously, we are going through challenging times. With growing prosperity comes more choices but also a greater skepticism," he said.

However, Najib said, this is not altogether unhealthy as it marked a societal change and as the older generation passed, the memory of what was sacrificed to achieve independence faded.

"But within each Malaysian there remains a sense that we are 1Malaysia, one people, who can only progress as one. This is what I hope all Malaysian will think of as they celebrate Hari Merdeka," he added.

The PM's call will be a short lived one with opposition parties pointing finger at UMNO for a local resident's protest march last Friday participated by all Malay based political parties members.

In the meanwhile, Perak opposition led by former Speaker Sivakumar attempted to convene a State Assembly tomorrow. This is despite the fact that he is no more the Assembly Speaker having been removed in the last State Assembly meeting.

As of the afternoon, their application to seek injunction against the State Secretary from preventing entry into the State Assembly Hall to convene a meeting was rejected by the High Court in Ipoh. Nevertheless, they insist on a reconvening. Harakah reported below:

It is expected that there will be another display of political immaturity as the Pakatan Rakyat ADUNs try to recreate another "assembly under the tree" in Ipoh tomorrow.

The situation in Perak is that the opposition's application to reject the validity of present Government has been uninamously rejected by the Federal Court of Appeal. Nizar claimed he will apply for an appeal to the Federal Court, which MB Zambery expressed graciously to "settle it once and for all."

Sivakumar is attempting to seek a ruling for his dismissal he claimed as illegal. In their pursuit to remove current Speaker, Ganesan, they had gone to the extent of attempting to create a non-issue on his position as lawyer.

According to the Perak State Constitution, the Speaker is "chosen by the Government of the day". With the status of the State Government clearly determined by the court and prospects of a reversal for Nizar is dim, Sivakumar's court battle will be an uphill one.

While Sivalumar, Nizar, Ngeh and Nga is expected to do battle with the police, supporters for the present State Government will convene at the tree behind the State Secretary to express their support for MB Zambery. It is the same spot Pakatan Rakyat did their "assembly under the tree" which is illegal without the consent of the Sultan and for various reasons.

As a leader who lead a party full of devout Perak's muslim, he should repent for adoring too much upon a tree. He knew that big tree is related to Buddhism and Hinduism. Gautma Buddha was baptised into a buddhist under a big banyam tree. And there is a symbiotic link between Hindu temple and big Neem tree. So Nizar be careful with Sivakumar, unintentionally you could become an apostle. Nik Aziz could not help thou go to heaven if it happened.