The Pakatan campaign is in desperation. Words are PKR and PAS are at loggerhead. PAS capacity in Bagan Pinang is limited and lack penerative strength into the army camps. The local PKR and some quarters within local PAS believed PKR choice of Shahruddin or local PAS Tahir Kassim would have faired better.

The campaign message by Pakatan have moved from local and candidate issues to national issues. Barisan Nasional, particularly its volunteer machinery, have gone on a massive leaflet campaign to answer all the troubling issues of the day that have been made into an emotioanal game by Pakatan.

Anwar is due to come tonight. He has picked specific destinations in the plantation hoping to convert some of the Indian voters to PAS. It is widely believed that Anwar selected Zulkefly and funded him. Thus, Anwar need to help Zulkefly who is widely believed to be trailing far in the postal votes.

To prepare the ground for Anwar's arrival, PAS have been pulling few stunts. 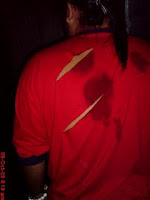 Two nights back they acted out a shuffle between 100 alleged BN wearing motorcyclist and some 40 PAS workers at their Markas. However, the pictures release by them through the blogs turned out to be fake. The pictured slash on the T shirt did not show any slash cut by a samurai sword as claimed by PAS Vice President, Salahuddin Ayub.

Till today, PAS has yet to submit a police report. Utusan Malaysia reported the police have made a report for inciting chaos by SMS believed to orginate from their Youth Chief and is forwarded from Dungun to encourage PAS members to come down an Jihad.

To some extent, the stunt may have helped. Crowd are beginning to trickle in and traffic are getting heavier in Port Dickson.

The Komplot Pembangkang as they are being called in BN's campaign are distributing fake SMS telling receivers of the message that majority of the army voted for PAS.

That is ridiculous for no one other than Election Commision officials have access to the ballot box. The box could only be openned in the presence of the Wakil Calun for both sides. Definately the ballots of the postal votes have yet to be counted.

That SMS is hoped to create a psychological effect of weakening the resolve of UMNO and initiating a herd mentality to go for Pakatan. Psygame only compliment the ground campaign.

What is Anwar due to speak about? If he see his candidate is trailing bad, Anwar may decide to use the platform to play up national issues. Should Pakatan reading points to optimism, he may go for the win.

For Zulkefly to win based on Anwar's charisma, he need to convert the traditional BN supporters amongst Indian voters. He may have to resort to stir up sentiment against Government using controversial Indian issus like A Kugan's death and Shah Alam temple demonstration. BN is have already done massive house to house campaign and pamphleteering.

Even the Teoh Beng Hock issue and PKFZ issues played by DAP are being explained. The 9% Chinese vote is still uncertain. DAP believed they have got their voters base nailed down to selective houses. Some feels Isa's magnimity is the decisive factor.

Many believed that it is the clan taiko from Kuala Lumpur that will give the voting instruction. Some of these taiko are former and close to BN leaders.

The archlles heel to Anwar is the problems in the Pakatan states, particularly Selangor. Their onsluaght on Isa's money politics issue is not working. BN can put Anwar stumble in his exagerated "r" pronouncation of rasuah by pounding on the message "Baru setahun setongah, Dah banyak cerita rasuah."

PAS campaigners believed that they need to penetrate the Malay voters to win, which is Isa's stronghold.

Anwar may have to resort to personal attack and replaying some old fiction like Najib's khalwat story, exosing alleged Isa's cronies, and the pig farms which moved to Selngor. Already there are signs of attempts to accuse Isa of scandalous affairs. But these stories are anticipated and it will be swiftly answered.

Anwar can try but personal attack will backfire in Isa's tuff. He will then have to deal with an embarassing encounter with Isa who is determine to do his walkabout in places Anwar is doing his. Old stories might come out and nothing discomfort Anwar than being embarassed by sarcasm.

The pro-UMNO bogs are already putting out humourous light poke in the form of KY Jelly ads. If there are some initiative, there will be KY Jelly banners receiving Anwar.

At 4:00, there will be 200 PKR Telok Kemang members announcing their joining UMNO at the Dewan Bagan Pinang. AT 6:00 pm, local youth organisation willannounce their support for Isa.