More than a "One-on-One" in Bagan Pinang

As far as nomination, it is a one-on-one in Bagan Pinang.

The independent candidate couldn't get a seconder and rumour of a last minute switch by PAS did not materialised. 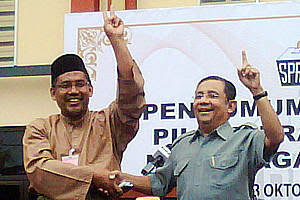 But for PAS, they have been campaigning since the death of the late Assemblyman Azman. The PAS website commenced operation as early as September 4th. They began their ceramah circuit in Ramadhan. House to house campaign in the housing areas and even into the army camps have been covertly going on for three weeks.

UMNO only started doing it's campaign round when there was confidence in Bagan Pinang that Isa would be candidate. The debate on Isa's candidacy had taken too much valuable time. As of this morning, the Campaign Command Centre at Batu 6 Telok Kemang has yet to be complete. UMNO is still struggling with briefing and discussing budget.

With such urgency, all should be ready by October 11th.

PAS and Komplot Pembangkang volunteers are already efficiently doing house-to-house campaign and their sweeper is clearing posters and banners put up and distributed by BN. In the meanwhile, their highly spinned and factually fabricated ceramah are churning volumes of issues to throw doubt and incite anger amongst their audience.

In the wake of this recurring UMNO bureaucrasy and cocophony, having Isa as candidate really helped. Unlike PAS and their candidate Zulkifli from Lenggeng, BN does not need to spend time introducing Isa. Port Dickson, Telok Kemang and Linggi has been Isa's turf for the past 25 years. He knows the place and the people by the back of his hand. Friends and supporters of Isa is not limited to just within Barisan Nasional but among those on the other side.

Other than sentiment to see a new face amongst the young, the locals acknowledge Isa for transforming the quaint seaside town and army base into a weekend tourist destination for urban Kuala Lumpur. Hotel and apartments have been sprouting in Port Dickson. The striving economy in Port Dickson has Isa's hand.

Isa has always been a problem solver for the people there, from solving local public facilities to small businessmen seeking help.

One grouse by the Indian in one estate is a housing issue in one of the estates. The land was acquired during his time and it is to be developed but hit a snag with Seremban. He gave his commitment to the Indian. "Isa yang ambil tanah. Isa akan selesaikan masaalah." But off course, vote Isa.

There was a revival in confidence for UMNO at last Monday on candidate announcement. Some 10,000 attended and the atmosphere was clearly a strong rally for Isa.

PAS responded with a massive attendance of supporters for nomination. UMNO had positioned itself badly at the nomination centre and lost the psychological edge. Save for Azeez attention diversion act, PAS could be getting all the media attention.

The voters concern are on local issues but the Komplot Pembangkang, particularly PKR and DAP are using the campaign to take the national issues to the people of Negeri Sembilan. Focus of their campaign is on Isa's money politics, alleged cronyism in the past, and repeating the label on UMNO as corrupt.

Despite a reminder by Nik Aziz, personal attack filled with spin, fabricated documents, and twisted fact will be part of the package. Thus far, they are just churning petty issue on Isa's home in Nilai.

But yesterday, fabricated letters from UMNO Secretary General, Tengku Adnan to Isa was circulated. The ridiculous letter allegedly inform Isa of Supreme Council's rejection of Isa's candidacy. It is an unheard of practise. Isa's name was propsoed by the Bahagian and not the form submitted by Isa.

More is expected from the Kelompok Pembangkang. Talk is there will be "bomb exploded" on Anwar's arrival to Bagan Pinang expected to be on October 8th. Probably a personal issue.

The issue used against PAS will be current and national issues. Being questioned is PAS and Kelompok Pembangkang's track record and inability to administer their states. PAS is being described as Bongak, a Negeri Sembilan dilect for liar. Their flip flop on various issues from their past positions will be highlighted.

The Lenggeng-based PAS candidate, Zulkifli Omar is being criticised for being a non local. This is Isa's strong area. Another is Zulkifli 's reserved personality.

Zulkifli lost three time in a row in Lenggeng. He is attacked for his lack of seriousness to service his own area.

There is a resentent brewing in the local PAS for choosing Zulkifli. The past candidate, Ramli enabled PAS to make inroad into the army camps. While Ramli is reluctant to take on Isa, it is believed that one Ustaz Tahir Kassim is willing. He has been actively doing programs locally and is seen by many as a more serious contender against Isa. Words are it is Anwar that determined the choice of candidate and the finance for campaign.

Anwar will always been an issue. They are pushing Anwar to explain the existence of DNA evidence on Saiful's despite the absence of physical evidence. Tonite the Ezam team is giving their ceramah. Expected to be another explosive revelation. Hopefully there will be no more mention of the stale six box of documents.

PAS, as said by Vice President Salahuddin Ayub is happy to maintain their previous vote numbers in the last General Election. For UMNO, their target should be to not just win but to improve on the non-Malay votes and regain votes lost to opposition due to resentment against the previous Abdullah administration.

The rumour in Port Dickson is that few posters of Isa were defaced with black paints some nights ago. There was that usual road repair during elections which created traffic jam and anger the locals. Najib has repeatedly asked to stop such practises and projek mee segera. Last Friday's khutbah strangely took up the issue of corrupt leaders.

Together with UMNO Malaysia's feet dragging to establish the campaign infrastructure, is Isa having to contend with Seremban dan Kuala Lumpur too?

Better not. Or anger will erupt amongst UMNO members whose tired of losses due to bad management by Ibu Pejabat and wrong uninformed decisions from leadership. Cases in point are Permatang Pasir and Kuala Terengganu.
at 10/03/2009 02:00:00 PM