"People must realise the horrors of war. What they (the Americans) do is inhumane”, said Tun Dr Mahathir during the press conference at the end of the conference session of the Criminalise War Conference & Exhibition at PWTC yesterday. The War Crimes Commission Hearings will begin today and end tomorrow.

Dr Mahathir went further, "They champion liberty, freedom, human rights and democracy but in actual fact, they torture people who they detain without trial."

He was refering to the US detention centre in Gunatanamo Bay, Cuba and Bagram, Aghanistan and many secret prisons established by CIA all over the world.

Yesterdays the conference was presented with gruesome description of two former Guantanamo detainee and hazards from banned weapons used in Iraq, Palestine, and Afghanistan.

Sami Al’Hajj, a Sudanese journalist from Al Jazeera was detained in Guantanamo Bay for seven years and was only released on May 1st, 2008. He described the beatings, water boarding, striped naked, sleep deprivation, degradation of religion and being force-fed he endured.

"There were psychiatrists who were part of the programme to psychologically break us," the Sun reported him saying. Read further in The Sun report below and on Marthaba here.

Begg is a British of Indian heritage had went to Bosnia as peace volunteers. Married to a Palestinian and went to a Jewish school, he was exposed to both side of the politicaldivide of the Middle East.

He was detained at his home in Britain and after a series of secret detention camps aroudn the world, he ended up in Guantanamo. During detention, prisoners are placed in a 6 ft by 6 ft cell and their only contacst with humen are the prison guards.

He said there are some 775 men, women and children were detained without trial in Guantanamo Bay was never charged and found guilty for any offenses. Guantanamo Bay detention was inextricably linked to invasion of Iraq even tortured customized specifically to each detainee.

Hana Al Bayaty, an Iraqi award winning film maker and executive member, described the invasion of Iraq as permanent war. Prior to the invasion, Iraq was fully disarmed and unable to defend against the attack.

Iraq was imperialism at its height as the country is now being dismantle culturally, economically, its civilisation, and its capability to revive the country.

Hana described the country being pushed further into chaos with sectaranism as the minority is armed and pitted against the majority. Education, healthcare, food and basic services denied to the population.

The Iraqi culture and heritage is dismantled.

The middle class are being literally destroyed to stem any possible capacity to recover. The professionals are living as refugee abroad.

The living quarters of the people is being partitioned and walls are erected with single access similar as in Palesine. The checkpoint is manned by militia which discriminately kill civilians.

Iraq is slowly being eroded its Arab character. The constitution no more described Iraq as an Arab state.

Dr Leuren Moret, a doctor who was a whistleblower from the Livermore National Laboratory, described the impact of the use of uranium shell and chemical.

Neighbouring countries are also affected. Air current could carry pollution and radiation from chemical and depleted uranium shells accross the borders. The rain then will affect the drinking water and food chain.

She told of the rising incidence of diabetes in countries like Israel as arising from this effect. The same effect is found in China far away from the scene of war.

This was the reason Dr Mahathir said during the press conference for the Malaysian public to be concerned and aware, although we are far away from the theater of war.

KUALA LUMPUR (Oct 29, 2009) : A journalist from Al Jazeera who was detained in Guantanamo Bay for seven years today described his detention as a living hell.

Sami Al’Hajj, a Sudanese who was released on May 1, 2008, told the Criminalise War International Conference of the beatings, water boarding, being striped naked, sleep deprivation, degradation of religion and being force-fed through a tube that he endured throughout his detention.

"There were psychiatrists who were part of the programme to psychologically break us," he said.

He claimed five of the detainees were driven by American soldiers to their death. 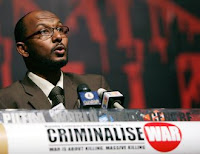 Sami was detained by Pakistani authorities at the Afghanistan border on Dec 15, 2001, mistaken for his colleague Tassir Alony who was wanted by the United States for information on Taliban and Osama bin Laden whom he (Tassir) had interviewed after the Sept 11 attacks in New York and Washington.

Sami believes he was a victim of the Pakistani authorities who were eager to hand over people to the US for a bounty of US$5,000 (RM17,129) for each person.

He was first detained at the Bangram detention centre in Afghanistan for six months before being transported to Guantanamo.

"We were shackled in a hunched position with hoods placed over our heads and ear plugs to cut us off completely from what was happening around us.

"My legs were numb from having to hunch for several hours during the journey from Pakistan, and then I was forced to stand up and pushed out of the plane, causing me to fall and break my legs at the knee," said the 40-year-old who depends on a walking stick as a result of that injury.

The 20-hour journey from Kandahar to Guantanamo was as harrowing.

Sami said although the Americans realised that he was not the person they wanted, they were reluctant to release him probably because they fear he would expose the atrocities he witnessed at the detention centres which held children as young as 11 and men as old as 95.

He appealed to representatives of countries attending the conference to take in prisoners released from Guantanamo who have nowhere to go.

"I appeal to all of you to find homes for men who were tortured and detained without trial, so that they can lead normal and meaningful lives.

"The torture has not ended. The reality is there are 212 detainees at Guantanamo still suffering under the Obama regime," he said.

He said many of those released were sent home only to be imprisoned in their own countries, such as Tunisia, Libya and Morocco.

"This is despite the fact that they were detained without any sound reason without trial for so many years," he said.

"Those who have to return to China face the possibility of being imprisoned and tortured worse than they were in Guantanamo Bay."

According to Sami, the largest group of people at the detention centre at the moment are 97 Yemenis. 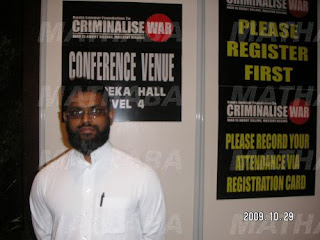 Kuala Lumpur, Malaysia (Mathaba) Born and raised in Britain as son of Asian parents, Moazzam Begg went to a jewish school and with a Palestinian wife, has a good view of all sides of faiths and went to Bosnia to join the foreign volunteers because of being outraged at the atrocities committed there.

Many years later he went to Taliban administered Afghanistan to help social projects, and this was to change his life forever. With his own years he has seen what a 1,500 pound bomb does, and what cruise missiles do, as well as smart bombs and phospherus bombs. Under the bombing he fled to safety in Pakistan, where the U.S. were dropping leaflets offering bounties to locals to sell foreigners.

Thus on the night of 31 January 2002, was a knock on his door, and a gun to his head. It was the last knock he'd heard for many years. There was no explanation, identification, and he was shackled and a hood went over his head and blocked his ears for the next 3 years. He was questioned by British intelligence and others, and finally ended up in Guantanamo, after passing through "extraordinary rendition" which means kidnap, abduction, false imprisonment, torture and in some cases murder.

"Gitmo" is thus the tip of the iceberg, he pointed out, since there are so many other torture centers around the world, through which abductees pass, and from which only some emerge in Guantanamo, the US occupied port in Cuba.

He recounted the case of a Libyan Ibn Sheikh al-Libi who was tortured and while being water boarded he said that he was working on nuclear weapons with Iraq. This Libyan disappeared, was given no legal process, and just three months ago he turned up dead in a Libyan desert prison. This is the person whose "confession" was used to claim that there was an Iraqi program of weapons of mass destruction in cooperation with others, in order to justify the war on Iraq.

Moazzam Begg recounted some of his experiences of being thrown into cages made of barbed wire, naked. He pointed out the irony that if the photographs had not been taken by American soldiers and leaked to the public of the atrocities committed at Abu Ghraib, the world may not know or believe what had happened.

For two years he was isolated from others while imprisoned, and the feeling of being abandoned by the world, Muslims, non-Muslims, was terrible. No legal process, being made a "sub-human", having to hear the screams of a woman he was led to believe was his wife being tortured, the orange suit that implied guilt, without one having ever being convicted of anything to do with September 11.

Still there are 200 people being held there, he said, and that "Operation Enduring Freedom" should have been called "Operation End Your Freedom." 2,976 people died on September 11, every person accounted for in that terrible terrorist act, but how many people know how many people died in the first week of "operation enduring freedom", in Iraq, or in Afghanistan, or in the proxy wars, no one cares, and it is an untold unknown number that we are being told is somehow justified.

Moazzam Begg said that it would be incorrect and unjust to say everyone is a torturer, biggot, or racist. The death and destruction wrought by Bush and his co-conspirators have been far worse than anything any terrorist could do, and this war crimes tribunal offers some hope.

He revealed to Mathaba News that the international media, who are not covering this conference in Malaysia, are quite open to covering his story and that of others, but that they are often not informed nor invited. The conference is not being covered by any non-Malaysian news networks other than the Mathaba News Agency.

Moazzam Begg called upon people to be brave, and steadfast, something he had learnt from the prisoners at Guantanamo. He asked of Malaysia to accept the 40 or so prisoners who are unable to return to their countries, some for as long as 8 years. Some of these have children who have never met their fathers, and will not have a normal life while their fathers are accused and held for crimes they did not commit.

Portugal, Ireland and Sweden have accepted these victims into their embrace, and he asked that Malaysia do so too.