It is sweet, but keep celebration short

The 5,435 win by Tan Sri Isa Samad is truly an astounding win that defied the predictions by most political pundits. Isa received 8,013 votes against Zulkefly's 2,578 votes and won at all the 8 polling centres and postal votes.

Postal votes for PAS was sgnificanly reduced from around 1,600 votes in 2008 to 601 votes. Isa managed to regain the non Malay votes. Except for the 27% majority at the Eastern poll centre, Isa won by margins of more than 40% in the Indian occupied estate areas.

On the non postal votes, Isa secured 4,492 votes to PAS's 2,036 which translates to 68% of local votes. Thus, there is no ground for PAS to deny Isa's win as merely due to postal votes.

The only irritating concern for Isa will be the 500 odd votes for PAS that remained from the last general election. 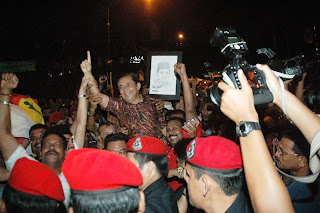 After the close 'technical' loss in Manek Urai, this first win by UMNO is indeed a sweet one. But it is must be kept short.

Save for Kuala Terengganu, it is indeed comforting for UMNO to win in it's own backyard. It help refute the perception that PAS is undefeatable and Pakatan's shock and awe campaign tactic can't be overcome. But is the win for UMNO or Isa?

Many felt this win is more attributable to Isa. Before UMNO get "besar kepala", it is still too premature to claim support for UMNO has returned and non-Malay have accepted BN. MCA and MIC still need to sort their affair. The road to recovery is still a long one.

No leaders in UMNO should make any claim for UMNO yet. They have a serious Extraordinary General Meeting on October 13th to 16th to contend with.

The Assembly will be discussing the party's Constitutional Amendment. The quota system is expected to go. The voting of party leadership will not be limitted to the 800 or 1,500 delegates selected to represent the Division at the party's Annual General Assembly.

The question that remain is what will replace the quota system. There must not be any system in place that is self serving for the incumbents. Simply because the party is in dire need to have a system able to replenish its pool of leadership talents and rejuvenate itself with fresh new blood.

For a party claiming membership of 3.2 million, UMNO must be reorganised into a structure that is able to galvanise the members and pool of talents within. It needs to establish an organisation that enable each and every member to contribute and play their own role in the party.

Perhaps UMNO needs to ponder the idea to segregate the individual's role within the party from that as elected representative or executive role for effectiveness. It's either holding a post in the party or as MPs.

This idea is gila-gila out of the box and far fetch now but it could improve effectiveness. It involves a change in perception and redefining the modus operandi in the selection of head of executives for state and federal government.

Maybe party position for adminstrative purpose is held by former veterans. The elected representatives do not need to spend time on party adminstration and politics. Leaders could rise out of their talents rather than party position and internal party politicking. (New addition)

UMNO need to inject new bloods by taking in more quality individuals into the party. PKR and PAS is doing a better job in attracting new talents from amongst the third and fourth channel. UMNO is still justifying the political jockeying by division and branch heads to refuse new talents. By right, this must be seen as a serious infringement by the party.

Isa's candidacy and win in Bagan Pinang must be viewed from the right perspective. It is an important example on the need for the party's elected representative to diligently service their constituency.

It should not be seen as the basis to justify all those with a past to return to public office. For veteran politicians, they must play a role to be mentor in guiding budding new leadership talents.

Isa should be seen as an exception rather than the rule. In Isa's case, he had served a "sentence" imposed by the party without creating much fuzz, although it is a questionable decision filled with intrigue. But it does not mena that such kind of loyalty be allowed to flourish. Loyalty to the party must be for it's spirit and struggle.

UMNO has to review decisions made by the disciplinary board during Abdullah's Presidency. Many decisions made during his time were suspiciously serving his political interest and had victimised many.

Money politics, which is practised during leadership selection, must be sternly addessed by making be expensive. The action on money poltics must severe but fair. The process must be kept private and confidential within the partyas much as possible.

Returning to the constitutional amendment, the number of party members able to vote must be significantly increased. Even the number 60,000 being bandied by party President is still "affordable" to a multi-millionaire. The reasonable number should be about 600,000; a number this blogger view as the true number of dedicated UMNO members.

Other than fixing the number, it could be based on eligibility. The eligibility requirement for anyone to contest for a post in the party must be kept at minimal and allowed to be determined by a consensus building democratic process.

Voices from the members and floor must not be muted and controlled. UMNO must learn to celebrate diversity. The true keramat of UMNO will only resurface from within the grassroot. It is democrasy that will save UMNO. The new UMNO must be a thinking UMNO and not lost in pettiness.

The democratic structure must be complimented with the right structure and education.

UMNO can't afford to be held back with old ways of doing things anymore. There must be a drive to ITiced the party. Information Technology must be embraced. One is either online or off-line.

Communication and feedback from party members prior to announcing major policy matters must be given importance. Top-to-bottom leadership must be complimented with bottom up system of feedback. This needs a credible state, division and branch communication infrastructure and personnel.

The leaders must listen a lot. As what the PM said in the March General Assembly, the Government do not really know everything.

UMNO must engage with other organisations and political parties, either friends or foe. They have to stop fearing differences in opinion. The new politics lies in the battle of ideas and require the ability to articulate and debate UMNO's point of views. UMNO's arguments need to be updated and require some fresh new perspetive.

Of utmost importance, Barisan Nasional must exist beyond just for elections and cabinet selection.

agreed with you there bro, its still a long way to go. do keep in mind that we've won at our own backyard, even though the victory is sweet, still a lot need to be done. congrats to TS Isa and all. now, no empty promises please, redeem yourself. work hard to regain the support from rakyat. keep your promises, and the rakyat will back you up all the way, InsyaAllah.

A voice, as always, a nice piece. keep up the good fight bro.

agreed with u bro. hopefully the message can be heard thru-out the whole of BN

We hope there will be more of "grass-root" leaders to emerge up front. Enough of leaders who just want to "eat-grass" and can be led by the nose when they should be leading instead.

I concur fully with your analogy of the situation.

The question now is does the UMNO President have the balls to really clean house and take up the suggestion?

If you look at it objectively more than 50% of the UMNO upper echelon is somewhat 'corrupted'. The system that was practiced for many years was flawed. The difference was that during Tun Mahathir's time he managed it well but Pak Lah screw it up badly. Now DSNajib is facing a major task to do something so that come GE13, BN can retain the 2/3 majority back. The best is for him to clean house totally but I think realistically that is almost impossible. He would have to drop half of UMNO current leaders. So what choice does he have? Almost all the Ketua Bahagian's are practicing some sort of money politic's. What do you do? Ask them to resign? So if you still maintain them and allow the members at the branch and division level to vote for the office bearers, do you think the Ketua Bahagian's could not influence the members. Trust me, he will still have influence if he has the RM's with him.

I agree with you that 60,000 members can still be bought by the corrupted leaders. Some other mechanism must be sought after to ensure the members are not being bought.