The good and bad omen at Hulu Selangor 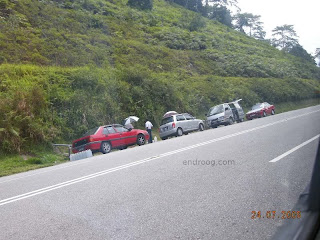 An uphill road from Batang Kali to Ulu Yam
The Hulu Selangor by-election has just ended with my friend, P Kamalanathan has just earned a title YB to his name.

Blogger Faisal Robhan spotted that the majority of 1,725 coincide with the date of nomination on April 17 and polling date on April 25th. Is that a lucky number or a bad omen for BN?

For Kamalanathan, it has been a series of good luck. He was an 11th hour compromise between Dato Seri Samy Velu and Tan Sri Muhyiddin Yassin. For a new candidate, his win was a David and Goliath story.

Kamalanathan win helped our call for new clean faces without any baggage from the past to be brought forward.

If his good fortune continues, this blogger is not surprise to see Kamalanathan appointed Deputy Minister in the next Cabinet reshuffle. A suitable post would be to harness his experiance in Bernas for Deputy Agriculture Minister.

More omens to talk about.

Winning back Hulu Selangor itself is a good omen. This is especially so when initial numbers and feedback received by yours truly was that BN was trailing and the number was as bad as 30:70 in favour of Pakatan.

Pakatan Rakyat had commenced campaign openly in contravention with EC rule immediately upon the burial of the late Dato Dr Zainal Abidin Ahmad.

They had a 2 to 3 weeks lead into the by-election to spin their failed policies in Selangor and bomb Hulu Selangor with unsubtantiated fitnah of corruption, APCO, etc. The only event worthy by BN was the first launch of Juara Rakyat at Bukit Sentosa.

BN had to grappled with the demand for a Malay candidate within certain quarter of the local UMNO Division, which were sore with the poor service record of Dato G Palanivel.

With BN stronghold Hulu Selangor falling to PKR in 2008 and less than resounding support from UMNO members for P Kamalanthan in 2010, Hulu Selangor cannot be called a BN fixed deposit.

The 1,725 win cannot be called a clear support if the claim by PKR's Vice President Syed Husin Ali of 600 postal vote in favour of Kamalanthan is anything to go by.

Rocky Bru had already cautioned Kamalanthan not to be another Ijok's Parthiban who managed to beat Tan Sri Khalid Ibrahim in the 2007 by-election but lost in the 2008 General Election in the Melawati seat.

Zaid might try again there and achieve his inspiration to be new Opposition head (if Anwar return to Sungai Buloh).

For MIC, Kamalanathan and his pleasant personality managed to unite Indian support for him. It is heard that some 1,000 PKR members and supporters changed their shirt Blue for the by-election.

That explains for the crumbling PKR machinery that had to call in PAS reinforcement by Friday.

Contrary to Zaid's claim to run a clean campaign, PKR campaign immediatelt went into dirty overdrive with fake letters from Perkasa and UMNO distributed to call for Malay vote Malay.

PKR machinery broke down due to money issue and was stunted by the massive bombing on Monday. Pro BN cybertrooper played up Zaid's alcohol drinking and race horse gambling habits. It was followed in the afternoon by Dr Halili Rahmat, much touted to be the PKR candidate for Hulu Selangor, jumped ship to UMNO.

Dr Halili did not create that profound impact despite expected to be a major problem had he run for PKR.

Ulu Yam remained on the same voting pattern. The Chinese there voted for Pakatan Rakyat despite clan and association leaders made a beelien to Putrajaya to pledge support for BN to the PM.

Worse, Batang Kali whose ADUN is from MCA, gave a resounding majority to Pakatan too.

This shows a continual pattern of Chinese votes for opposition Pakatan Rakyat. Does the selection of Kamalanathan not convince them that BN remain committed to "perkongsian kuasa"?

Or as one theory being bandied around is saying, the Chinese has already met material wealth and dominated the economy thus are now aiming political dominance?

They saw what they can acquire and be oblivion to the compromise and need of other communities in Penang and for a short while in Perak. When in power, the Chinese enrich their peers.

While not in full power, Chinese Pakatan exco knows well to dominate with Chinese interests.

But is this the way forward disguised as Malaysian Malaysia or now rebranded as Middle Malaysia? Will this ensure racial integration and unity expounded by Pakatan's claim of multiracialism and multireligion?

Government has bend backward to satisfy the Chinese voters. They have introduced the concept of 1Malaysia, New Economic Model, more financial assistance to Chinese schools, scholarship to all races, and liberalising to business sector. Economy is recovering and more promising economic growth.

Is the Chinese telling that these does not mean anything? What they say they wanted is not really what they wanted. Are they saying they will respond only to a cruel emperor or a Mao Tse Tong like leader?

The Chinese is telling out loud to all Malaysans that it doesn't matter to them the reaction of other races.

They do not care if other races react similarly and the whole country vote along racial line with Chinese for Chinese, Malay for Malay, Indian for Indian, Kadazan for Kadazan, Dayak for Dayak, etc., Chinese will vote according to racial line irrespective of its impact on the country.

MCA and Gerakan can't be blame any more for their continual failure to deliver votes because the power shift within the Chinese community have moved to the head of clan and Chinese associations.

My only words to Gerakan and MCA is to stop blame UMNO. Gerakan should stop being an apologist and join up with DAP where your ideological abode lies. MCA should stop yapping at others and being bold headed (their attitude towards Perkasa) until they can deliver votes.

Such is the mindset of MCA and Gerakan, their leaders do not deserve to hold any Ministerial position until they can prove themselves.

BN machinery showed some improvement but is still caught in a timewarp and have yet to understand campaigning in the new environment, even in poor Internet access Hulu Selangor.

Central command and control does not work. Preplanning does not work. Everything is about speed and distribution - speed of respond, speed of attack, surprises and speedy responses, and staying current.

Party machinery was lazy, calculative and strategically near inoperable. Party leaders including some Ministers were more interested in campaigning for themselves and politicking than campaigning. BN election machinery remain dependent on Government machineries and unofficial "component parties". They can't afford to continue that way.

BN still haven't found the formula to win the youth. Or are they still not convince that the party need to rid off Khairy Jamaluddin and corruption to win the confidence of youth?

However, one good omen came out of Hulu Selangor. Everyone worked hard and were united in ensuring a BN win. Was it because of Kamalanathan or BN?
at 4/27/2010 09:45:00 AM

I think the fact that Najib stood committed to power-sharing with the component parties in BN is appreciated by MIC.

Kamal shows that only ineffective MIC reps are rejected, not the whole party. That could be the gate to Hindraf being recruited back into MIC/BN.

The chinese are politically more sophisticated. As long as anwar or alternative "Malay" are available, they will NOT vote UMNO.

Their plan is to takeover governance first thru a Malay face - and immediately puppetise this Malay into changing/tweaking the constitution to suit their agenda.

So only pliable Malays or Malays who have "secrets" will suit their grand plan. Talks of merger with singapore is another factor why the chinese will not vote UMNO.

GE2008 has opened up the possibility for them to govern Malaysia thru a Malay proxy.

Paklah and KJ are suspected to be their agents towards a Malaysian Malaysia concept of governance, which will see Malaysia becoming a second singapore.

So the Malays have to be politically AWARE and not trust easily any of their moves.

"Or as one theory being bandied around is saying, the Chinese has already met material wealth and dominated the economy thus are now aiming political dominance?"

If this is true, whatever PM gave or intend to give will not be appreciated until PM gives his seat to them.

If this is true, might as well PM start pondering. Maybe it is better to focus on others such as PAS supporters or Indian or Sabah/Sarawak Bumi. They are the ones needed help the most.

Myself used to have strong inclination towards PAS because of Islamic values they promote but not now. I realized its all about votes! So, BN could start on educating and wooing these group. Spend BN limited resources on these group, I believe, give better return.

Well this is not analysis, its just a time to score pathetic political points. How many leaders apart from KJ, Najib and Dr. Mahahtir managed to attract 1000+ crowds?

Aah well, being accused sore losers isn't something new to you

"Or as one theory being bandied around is saying, the Chinese has already met material wealth and dominated the economy thus are now aiming political dominance?"

SPOT ON, BRO... my sentiments exactly and that is the main reason why i quit Bersih...they were getting greedy for 999years.

Its a Lucky Number for MIC...

We must admit that UMNO and the Malays are terribly Generous to the MIC and the Indians!

Don't you think that by now, Sami should at least Listen and Follow what DS Najib Says...

Can an Indian tiger be tamed?

I don't think Najib is stupid to let HulSel become another Ijok. Najib's not Pak Lah.

Forget the notion of getting your comments published. I don't even read what you write.

You are banned from commenting here.