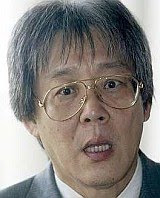 This follows the granting of an ex-parte order for his release by Court of Appeal judge Datuk Sulaiman Daud pending the hearing of an appeal against the High Court’s refusal to issue a discharge order for Chang’s release despite the fine imposed by the High Court which was paid by Chang’s friend.

An interim order was also given to stay the High Court’s decision in refusing to issue the discharge order.

Chang was released at about 6.30 pm from the Kajang Prison and was received by his lawyers and family members.

His lawyers obtained the release order at about 4.30pm. Chang, who looked weak when approached by reporters, said, “I’m okay.” When asked if he has been eating, he responded: “Bubur (Porridge)

Chang, 60, a lawyer, was sent to prison on April 1 following his refusal to pay the RM20,000 fine imposed on him by the High Court on March 25 for contempt of court in his defamation case against American Express (Malaysia) Sdn Bhd.

On April 7, judge Noor Azian Shaari refused to issue the discharge order to Salahuddin Hashim, a friend of Chang, to secure his (Chang’s) release despite the fine paid by Salehuddin on grounds that a third-party did not have locus standi to pay the fine.

Chang was cited for contempt when he failed to apologise to the court after an argument with the judge and a lawyer, during cross-examination by the lawyer in his civil suit.

The attempt to pay the fine was undertaken without Chang’s knowledge as his friends were concerned about his well-being following his hunger strike for being sent toprison. He ended his nine-day protest after a plea from Dr Mahathir.

On April 5, Kajang Prison authorities had to admit Chang to the Serdang Hospital where he was put on drip after his health took a turn for the worse following his refusal to take any solid food.

In his affidavit to support his ex-parte application for Chang’s release Salahuddin claimed that he paid the fine on behalf of Chang on April 5 and handed over the original receipt of payment which was issued bythe High Court to a Kajang prison officer, and requested that Chang be released from prison.

He said, however, he was directed by a Prison officer to go back to the High Court to obtain a release order in order to secure Chang’s release.

He said the judge had ordered that the RM20,000 fine which he paid be refunded to him.

However, he said he undertook not to claim back the RM20,000 paid by him on behalf of Chang but would abide by the Court of Appeal’s decision.

Salahuddin said there were merits to the appeal, adding that the High Court erred in law in holding that he did not have locus standi to make the application for Chang’s release.

Meanwhile, at the Kajang Prison, one of Chang’s counsel, Manjit Singh, said Chang was in good condition and will be going home.

Manjit said Chang had been treated well while he was in prison. He said Chang will be going for a medical examination at the Subang Medical Centre. — Bernama
at 4/12/2010 09:40:00 PM

I am delighted that my friend Mathias has been released and I hope everything will go on well with him.

I hope he takes good care for his health first over other things.

Glad to hear that he is going to SJMC for that purpose.